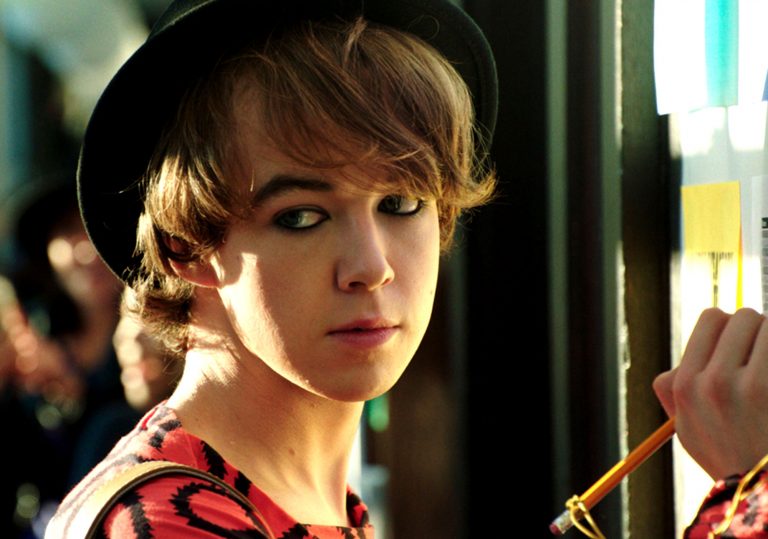 The first directorial outing from the producer of films such as “Moon” has got to be worth a watch, right?

Some entertaining and touching moments in a largely predictable film with a disappointing lead.

It barely scratches the surface of the complex themes that it wants to explore.

Alex Lawthor struggles to bring his underwritten lead character to life in this gay-themed teen drama from Trudie Styler.

“Sometimes I dream I can fly, but I’m so exhausted from flapping my wings”, says Billy (Alex Lawthor), the central protagonist of Trudie Styler’s shallow LGBTQ teen dramedy, Freak Show. The film aims to inspire with a message of empowerment and acceptance, though it often tries too hard to do so. It suffers from the same fate as Billy, losing any subtlety or sensitivity as it reaches for the stars.

We quickly learn that Billy is a proud, gay teenager obsessed with glamour, glitz and little else – such is the one-dimensional nature of his character. After his loving but unstable mother (Bette Midler!!) checks into rehab, Billy is forced to move in with his stereotypical, disapproving father (Larry Pine). He is then enrolled in an ultra conservative high school, where he is faced with difficulties ranging from abusive classmates to dismissive teachers.

Billy endures, though it’s hard to feel a huge amount of sympathy for him. This is not the fault of Lawthor, who has made a name for himself with TV roles in Black Mirror and It’s the F***ing End of the World, as he imbues Billy with a measure of credibility. Instead the blame lies in how the character is written – his unwavering superiority complex makes it hard to pine for his success.

Despite this insipid central presence, the film does offer some compelling supporting turns. It thrives when depicting complex inner struggles, whether it’s the difficulties of having a traditional father accepting his son, or the story of Flip (Ian Nelson), the reluctant jock, trying to come to terms with his own identity.

Nevertheless, Styler, directing her first fiction feature, fails to cultivate a sense of realism. With more slo-mo fashion montages than captivating interactions, she always appears to favour style over substance. Sadly her style is not half as distinctive as Billy’s outfit choices.

The story improves considerably towards the end, as it climaxes with a great “We’re all freaks and that’s okay” message via Billy’s homecoming speech. By this final stretch, it demonstrates a better understanding of issues it wants to explore within the teen and queer communities, but it’s not quite enough.

The first directorial outing from the producer of films such as “Moon” has got to be worth a watch, right?

Some entertaining and touching moments in a largely predictable film with a disappointing lead.

It barely scratches the surface of the complex themes that it wants to explore.