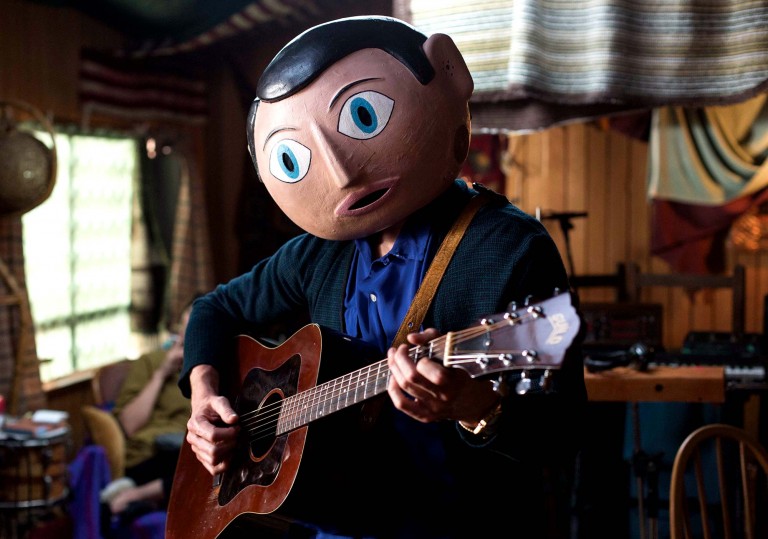 Given the set up, the conventionally sentimental ending feels like a cop out.

Surrealist shenanigans are what we’ve come to expect from Welsh gonzo journalist and screenwriter Jon Ronson (The Men Who Stare at Goats), but he surpasses all expectation with this charmingly off-kilter resurrection of cult TV and stand-up persona, Frank Sidebottom, who was brought to life by musician and comedian Chris Sievey for over two decades.

Here Ronson – who played keys in the Frank Sidebottom band for a short period in the late ’80s – alongside director Lenny Abrahamson, repurpose this mostly forgotten Brit oddball as the catalyst for misadventure in a darkly comic tale of a struggling musician’s painful rite of passage.

Humming a happy tune and tweeting a merry Tweet is Jon (Domhnall Gleeson), who’s long dreamed of making it big in the music industry but doesn’t really have the talent to get there. When Jon lucks his way into playing a local gig with touring band The Soronprfbs – whose unpronounceable name forms one of the film’s best running jokes – it feels like destiny calling. For a short time, at least. Because despite his palpable enthusiasm, we sense from the outset that Jon is out of his depth.

It’s not (just) that he’s a terrible musician, more that Jon isn’t reading from the same songsheet as the band’s mercurial and enigmatic frontman, Frank (a literally unrecognisable Michael Fassbender), who wears a giant papier mâché head which he refuses to take off – he sleeps in it, washes in it, even eats liquid meals through a tube. In fact, none of the other band members have seen Frank’s real face.

With judgement clouded by his pursuit of stardom, Jon ignores the initial bad vibes, and before long he’s piling into a van and unloading gear into a remote Irish cottage-cum-recording studio to lay down the band’s debut long-player. What he thinks is just going to be a weekend-long jam, however, spirals (or rather stagnates) into an 18-month slog during which the band wrestle for Frank’s affections. During this time Jon bonds with Frank, who opens up without ever letting the mask slip, while Jon’s inclination towards watered-down yet “extremely likeable” pop songs sours his relationship with scowling theremin player Clara (Maggie Gyllenhaal), who’s never less than forthcoming in her hatred.

Anyone who has ever toiled day-and-night in search of musical perfection, only to reach a point of artistic indifference, will relate to this delightfully screwy black comedy. Yet Frank is also a clever satire on the corruptive power of the internet, as Jon’s ritual chronicling of the band’s extended recording session racks up YouTube hits for all the wrong reasons. Their internet infamy gets them noticed by the programmers of none other than SXSW, and so, somewhat reluctantly, the band hotfoots it to Austin to perform for their adoring fans.

When they arrive, the reality that going viral doesn’t equate to actual popularity hits Frank hard. With the wheels threatening to come off, Abrahamson steers his film down a conventional avenue and the lingering question over Frank’s true nature – is he a tortured genius, closeted freak or just a hipster with a big head? – is eventually answered, for better or worse, in a poignant closing scene that jars with the film’s hitherto madcap tone.

Given the set up, the conventionally sentimental ending feels like a cop out.