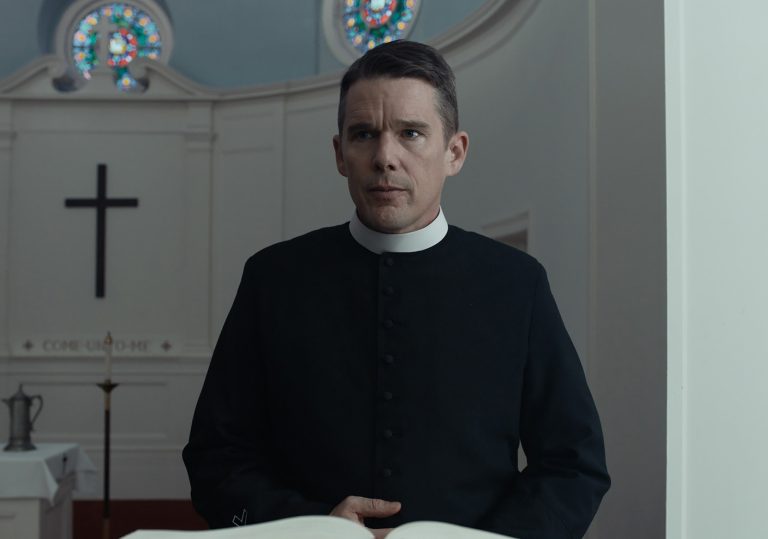 Schrader’s form has been pretty patchy of late.

A spiritual odyssey for the damaged. Hawke plays a blinder.

Is it too early to call this Schrader’s masterpiece?

There’s something extremely personal about Paul Schrader’s First Reformed. So much so, the experience of watching it feels like spying on a confessional booth as Schrader – who was so nearly a man of the cloth himself – talks to God. The veteran filmmaker has been a bit off his game in recent years, but in returning to the spiritual territory which has fascinated him as a writer and film scholar for decades, he’s created something truly special: a conversation with some higher power that takes place on a cinema screen.

Reverend Ernst Toller (Ethan Hawke) lives a pious life in present-day upstate New York, where he’s the custodian of the First Reformed Church. Described as a “souvenir shop” by Toller, the congregation is dwindling and the small chapel itself more valuable to the community as a tourist attraction than a place of worship. Ernst – a former military chaplain seconded to First Reformed after the obliteration of his family – is as much a relic as his home, and he decides to keep a journal for a year as an experiment. His tortured entries make up the film’s narrative, revealed in Hawke’s earnest, solemn voice-over, as he struggles to reconcile his growing unease at the intersection of capitalism and religion with his spirituality.

Mary (Amanda Seyfried) approaches the good Reverend hoping that he might be able to talk to her distant, spiralling environmental activist husband Michael (Philip Ettinger) and bring him some peace – but his meeting with Michael and Mary only leads Toller further into the darkness that has plagued him since the death of his son in Iraq. “I talked my son into a war with no moral justification,” he tells Michael, matter-of-fact. He’s been punishing himself ever since, and as First Reformed nears its 250th anniversary, Ernst is forced to contend with the expectations of religious conglomerate Abundant Life, whose corporate approach to Christianity sees Toller ill at ease. 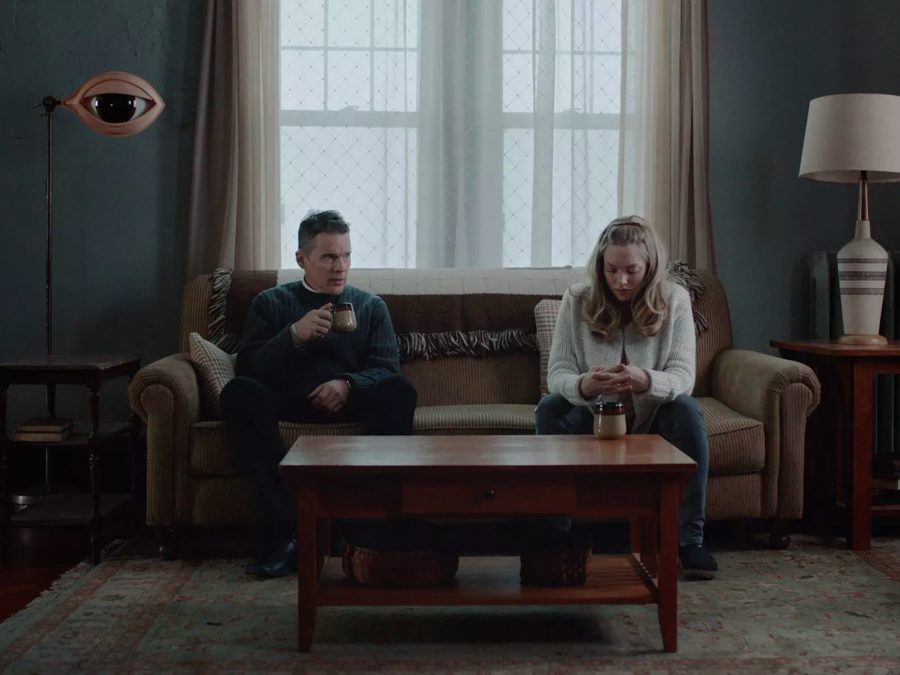 Confronting environmental disaster and social decay, Schrader seems deeply critical of the monetisation of religion which has lead to ‘super churches’ in Western Christianity. Although Toller’s boss Pastor Jeffers (Cedric Kyles) insists “There’s no dollar sign on his pulpit, no American flag either”, Schrader disputes this, as well as the cynicism which sees big business buying into the institution of the church – how can the church be apolitical when it’s corporate? Steeped in the plagues of late capitalism and climate change, there’s a definite solemness about First Reformed, and a sense of incredible despair.

Nowhere is this exemplified more than in Hawke’s mesmerising performance – an absolute career best. The camera stays with him almost constantly, and he embodies a man adrift even when he says nothing – a held breath or clenched jaw speaks to Toller’s inner turmoil. He presents Toller as a man growing increasingly disillusioned with the cause he’s dedicated his whole life to. Yet Toller is also a true Schrader protagonist, spiralling into his own misery – he says it himself, quoting Thomas Merton: “I know that nothing can change, and there is no hope.”

This spiralling disillusionment leads to austereness even in the film’s humorous moments, such as Toller berating his friend and colleague Esther (Victoria Hill), or a church youth choir solemnly singing Neil Young’s environmental protest song “Who’s Gonna Stand Up?” Each one elicits a sort of peculiar response whereby it’s hard to know if you should laugh or cry.

It’s arguably up there with Schrader’s strongest work in terms of aesthetics, too – Lustmord provide an atmospheric, ambient score interspersed with haunting organ music and renditions of popular hymns, and Alexander Dynan’s cinematography captures gradual the shift from light to dark, sculpting scenes with the intense framing of Raphael’s Renaissance masterpieces, and later Dali’s surrealist work. The sight of baby pink Pepto Bismol poured into a glass of whisky, or red blood seeping into white snow, speak to a world of physical decay. From the man who wrote the book on transcendental cinema, First Reformed feels like a culmination for Schrader, who has always been a scholar of film as well as a filmmaker.

All of this builds to a magnificent, batshit climax which is likely to divide opinion, but for sheer audacity and bold vision alone, First Reformed is up there with Schrader’s best (and would make for a cracking double feature with Martin Scorsese’s Silence, which Schrader once tried to make himself). First Reformed is a film about losing your religion, and more than being a damning indictment of America under late capitalism, it wrestles with the despair that many of us feel right now with regards to political and social turmoil. We don’t want to think of ourselves as powerless, but Schrader’s film confronts that possibility, and in cutting to the bone, toys with the possibility that even if God is listening, he might be past forgiving us.

Schrader’s form has been pretty patchy of late.

A spiritual odyssey for the damaged. Hawke plays a blinder.

Is it too early to call this Schrader’s masterpiece?