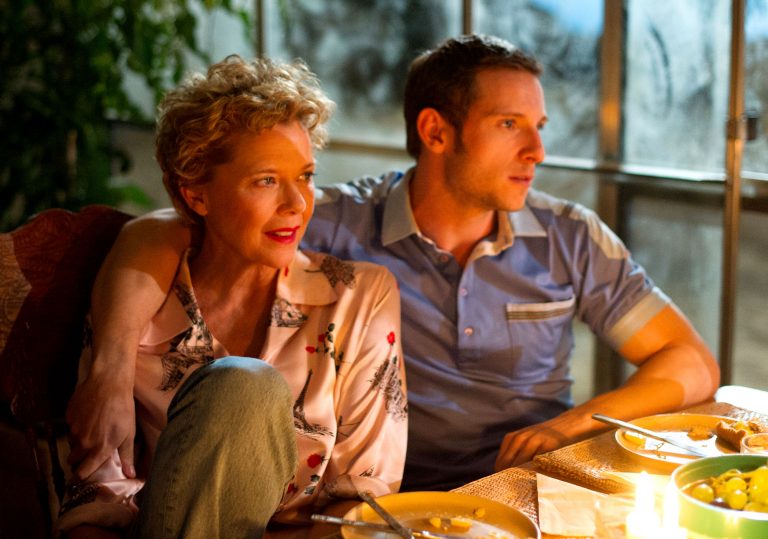 One singular Hollywood star takes on another.

Film stars might not die in Liverpool, but they sure spend a long time dying there.

Well, it’s no In a Lonely Place, or The Big Heat, or Human Desire or...

“She was a big name in black-and-white films, not doing too well in colour,” we’re told near the start of Film Stars Don’t Die in Liverpool. “Always played the tart.” Of course, there was a lot more to Gloria Grahame than that, but film biopics have an unfortunate habit of flattening out the complexities and inconsistencies of a person’s life to fit a familiar, simplistic template.

In the 1940s and ’50s, Gloria Grahame was involved in some of the greatest films of the studio era, winning an Oscar for The Bad and the Beautiful and being nominated for Crossfire. She had four marriages (including a notoriously tumultuous one with Nicholas Ray), and her insecurity about her looks led her to undergo a series of damaging plastic surgery procedures. Paul McGuigan’s film, however, is interested in just two things: her late-in-life romance with a much younger man, and her sad decline as she finally succumbed to cancer.

Film Stars Don’t Die in Liverpool is adapted from the memoir by Peter Turner, who fell in love with “Glo” in 1979 and then cared for her through her illness in 1981. If the prospect of viewing a female Hollywood icon through the lovestruck eyes of a young Englishman provokes queasy memories of My Week with Marilyn, you can relax a little, because this one at least boasts two lead actors who share a genuine chemistry. While Annette Bening might not look much like Gloria Grahame, there’s something irresistibly spirited and beguiling about the performance she delivers. She relishes the opportunity to play an unapologetically sexual 55-year-old, and her flirtatious exchanges with Jamie Bell (who gamely keeps pace with her) make the film’s opening scenes glide by smoothly.

The problem is the rest of the movie. McGuigan handles the transitions between time periods in imaginative ways, but the trips to 1981 are so much less engaging and rewarding than those initial encounters. Gloria and Peter’s visits to the US are plagued by horrible rear-projected backdrops (perhaps intentionally to create a dreamlike atmosphere, but they just look cheap and tacky), and by the time everyone has gathered together in the Turner family home, with Julie Walters dusting off a rote “Scouse Mum” turn from her repertoire, the unexpected sense of vitality and intimacy that we enjoyed earlier in the film has long since disappeared. There’s nothing left to do but watch as Gloria gradually deteriorates, and while the filmmakers work hard to construct a tearjerking climax, it has no weight because it just feels like we’re going through the biopic motions.

It has become standard practice for biopics to end with real images of the people involved and Film Stars Don’t Die in Liverpool shows us Gloria collecting her Best Supporting Actress Oscar before the credits roll. But the film’s most striking use of archive footage occurs much earlier, when we’re treated to a clip of her singing ‘Ace in the Hole’ from the 1954 noir Naked Alibi. It’s only a brief glimpse, but it might be enough to make you wonder why you’re not spending this time just watching a Gloria Grahame picture instead.

One singular Hollywood star takes on another.

Film stars might not die in Liverpool, but they sure spend a long time dying there.

Well, it’s no In a Lonely Place, or The Big Heat, or Human Desire or...