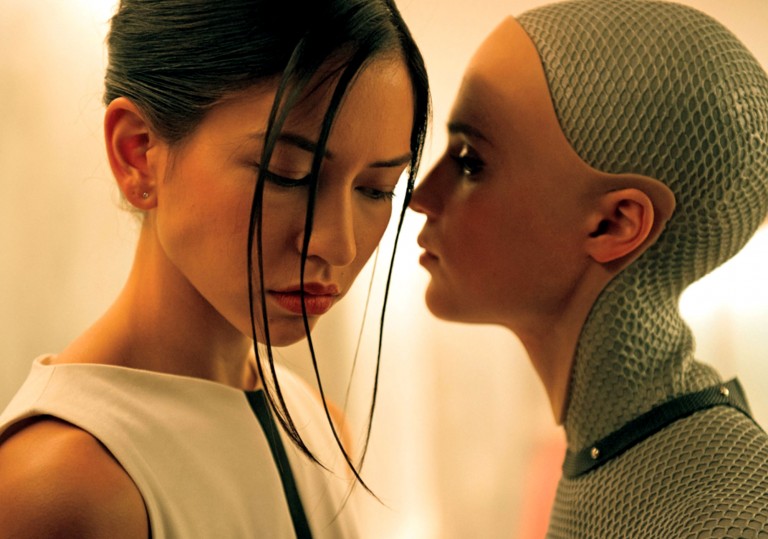 A film to like more than love. Plenty of ambition, but doesn’t quite hit home.

Feels like a pathway to grander things for Garland.

This directorial debut from novelist and screenwriter Alex Garland is perhaps more interesting as a study of Millennial superbrains-turned-entrepreneurs than it is a speculative exploration into the future of artificial intelligence. Garland has said in interviews that his film has been inspired, dramatically at least, by Joseph Mankiewicz’s chilly, mano-y-mano chamber piece, Sleuth, from 1972, but in fact it has more in common with Stephen Spielberg’s Jurassic Park, right down to its numerous visual homages.

To paraphrase Ian Malcom, it’s about people being so preoccupied with whether or not they could that they didn’t stop to think if they should. But it also offers a more level-headed and affirmative twist on that potentially alarmist premise.

We meet Oscar Isaac’s Nathan in his Scando-like futuro stack. He is shirtless while busy practicing his haymakers on a punch bag — a portent for things to come. He’s a youthful tech whiz who is the smartest guy in the room, the building, the state, the continent and, quite possibly, the world. He hand picks Domhnall Gleeson’s puppy-dog code-jockey Caleb to join him in this off-map locale to execute the ‘Turing Test’ on a humanoid robot named Ava (Alicia Vikander) in order to determine whether she has achieved any level of human sentience.

As expected, this doesn’t turn out to be the rosy mini-break of intellectual and professional transcendence that Caleb thought it might be, his every move apparently anticipated by the wily Nathan who appears to be testing him as he tests Ava. And then you have Ava, whose response to Caleb’s interrogations aren’t always as expected — so the film concerns the fluctuating power relationship between these three characters.

It’s a classical set-up, and as with its slinky android protagonist, Garland makes it very easy (too easy?) to see all the cogs, pulleys and gears of his plotting. The problem is that, often when events are occurring off camera and the characters believe they’re getting one up on their compatriots, Garland often as good as tells us that all is not what it seems. So final act explanations arrive as more of a formality than a surprise.

Though the film boasts some luxuriant, crisp effects work that puts many similarly-inclined Hollywood productions to shame, it still ends up coming across as something of a modest film. Garland is clearly interested in picking apart the metaphysical quandaries that come from artificial intelligence, though is consistently weighed down by a leaden, tricksy plot which never really convinces.

The morality of AI is discussed in depth, though the film ends up fudging its thoughts on whether a generation of factory-built humans would ultimately be a good or a bad thing. The film climaxes on a satisfying note of ambiguity — you almost wish that Garland had started his film at this point rather than ended it.

A film to like more than love. Plenty of ambition, but doesn’t quite hit home.

Feels like a pathway to grander things for Garland.