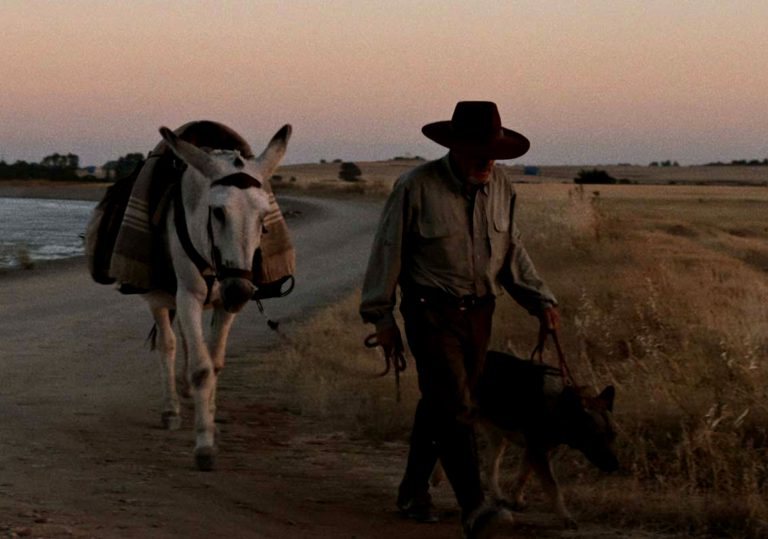 You know it’s going to appeal to the animal lover in you.

For such a simple storyline, the film is rich with emotion.

A gem of a documentary that you won’t forget.

A tender, evocative portrait of a man named Manolo and his trusty donkey sidekick, Gorrión.

Manolo lives a modest life, surrounded by the wilderness of Southern Spain. Despite his ailing health and his daughter’s concerns, he decides that he wants to walk the famous ‘Trail of Tears’ in America (in homage to displaced Native Americans forced from their lands due to an aggressive clearing act in the 1830s). He will not do this, however, without his his donkey, Gorrion, referred to as an “inseparable fellow wanderer”. We follow Manolo and his animal pal as he attempts to make this bizarre dream a reality.

Spanish director Chico Pereira has a signature way of combining elements of fiction and non-fiction in his documentaries, and this is true for Donkeyote. The film looks stunning. It opens with a shot of Gorrion’s silhouette against the sky, just before the sun begins to rise and a hint of daylight filters in from below. Slowly, different elements are introduced to the shot, like dogs bounding around, and it’s a magical way of capturing the glory of a new day. The breathtaking images of the Spanish landscape are often accompanied by long periods of contemplative silence, which are just as nourishing as when the subjects are talking about their lives.

At the heart of this film is the bond between Manolo and Gorrion. The most tender moments are shared between these two old friends. The scenes with them perfectly capture a silent understanding between man and animal. At one comical and touching moment, Gorrion refuses to cross a bridge, and Manolo just waits until he can finally coax him across.

The lack of ‘action’ in this film is what makes it so powerful, as Pereira’s camera captures the moments that would otherwise pass us by. Focusing on one man and becoming completely invested in his dream and his story immerses us in his life. Manolo’s determination is inspiring. Even though he has been told that his heart cannot withstand the pressure of a big trek, he still chases his dream. He knows that he is nearing the end of his life, and that this is what he wants to do. He wants to be with his animals, among nature, and he wants to walk.

You know it’s going to appeal to the animal lover in you.

For such a simple storyline, the film is rich with emotion.

A gem of a documentary that you won’t forget.