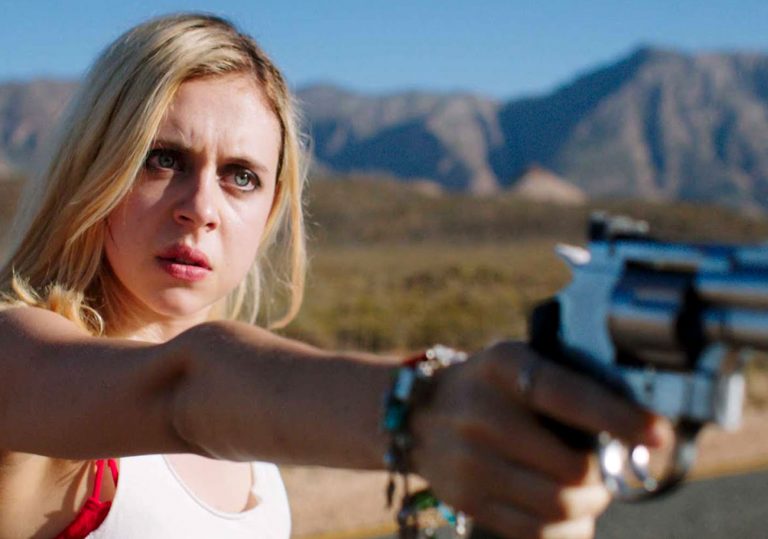 This is not a very good film called Detour.

Some major young acting talent is put to waste in Christopher Smith’s garbled and derivative neo-noir.

There are two possible effects that come from lifting the title of a respected movie classic: on the one hand, it can be perceived as an audacious, assuring wink to savvy viewers that you’re aware, as a filmmaker, of your movie’s debt to hallowed classics of the medium; on the other hand, it can serve to accentuate how much more desirable revisiting older, better films would be, than to sit through a pretty bad new one.

If we’re being generous with regard to Christopher Smith’s neo-noir runaround, Detour, it almost fits into both of the above. Edgar G Ulmer’s not-so-neo-noir of the same name, from 1945, is without doubt the superior movie, but it doesn’t really have all that much in common with this film’s story, which owes a bigger debt to such ’90s throwbacks as Tony Scott’s roistering crime caper, True Romance.

But Smith does have an inspired trick up his sleeve as a way to enliven what is very familiar material, but he only manages to sustain the interest for a short while. It arrives in the form of a parallel plotting device that specifically recalls, of all films, 1998’s chocolate box exploration into the butterfly effect, Sliding Doors. And lest there be any doubt about the explicit nod to Gwynnie’s tube-hopping opus, cast member John Lynch turns up here in a glorified cameo.

These different paths come as a result of law student Harper (Tye Sheridan) making a drunken deal with the devil. The devil is a foul-mouthed bad boy played by Emory Cohen, who has come to collect his pound of flesh the following morning. One path follows Harper accompanying the criminal and his abused girlfriend Cherry (Bel Powley) to Las Vegas to kill his loathed stepfather (Stephen Moyer), who, he discovers, is heading there on a business trip. Meanwhile, in an alternative plot reality, we see the lad instead decide to stay home and confront the wayward patriarch about his grievances before he heads off.

The proverbial excrement hits the fan pretty swiftly in both cases, which might have lent the film some sort of thematic weight were it not for an additional structural device that features later on. This in turn serves to undermine any depth suggested by the dual timeline conceit. Not that it promised all that much to begin with. With its slick, split screen compositions and puzzle box plotting, Detour is superficially compelling in bursts, but the elements never coalesce into anything of substance.

At the centre of Smith’s film is a trio of tried-and-tested young talents: Powley made her mark as a sexed up schoolgirl in Marielle Heller’s The Diary of a Teenage Girl; Cohen turned up the charm as an Italian-American dreamboat in Brooklyn; while Sheridan excelled in sandblasted father-figure drama, Mud. So it feels doubly sad to say that all three are completely wasted in vapid, two-dimensional roles.

Powley, in particular, suffers the indignity of having to play a stock stripper femme fatale. Indeed, her superfluous, slow-motion pole dance that sits beside the film’s opening credits sequence does serve as a useful and immediate red flag as to the lazily familiar road the underpowered film will tumble down.

This is not a very good film called Detour.