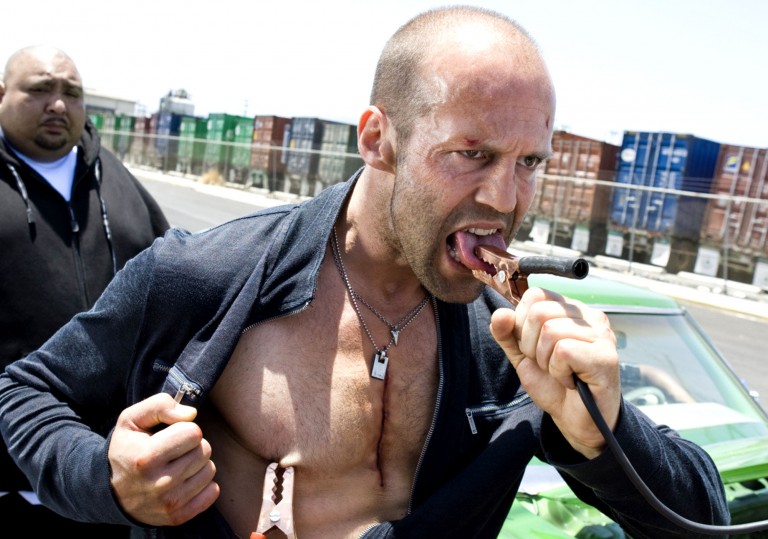 Crank was absolutely mental. We’ll have more of the same please.

Go with your mates to a Friday night late show and you’ll all have a blast.

It’s bullshit, but it knows it is…

Crank: High Voltage is beyond criticism. You can’t call bullshit on a film that glories in its own absurdity. This sequel, set three months after Chev Chelios (Statham) fell several-thousand-feet from a helicopter, sees him wake up (natch) in an ersatz hospital having had his heart nicked by a Triad gangster.

Chev ain’t loving this, especially as the artificial heart that the goons leave him with is only good for a few hours unless he keeps it juiced by plugging himself into various bits of electrical equipment. Like a human plug, Chelios is forced to track down a series of unlikely sockets including police Tasers, live-wire leccy cables and sundry other very, very deadly forms of self-rejuvenation.

Anyway, that isn’t the point. The point is, Chev has to leg it around LA kicking the living shit out of everybody until, after 90-odd minutes, he and we are left panting in a puddle of our own blood/sweat/tears (delete as appropriate).

There’s something perversely triumphant not just about the Crank series – as unlikely a franchise as it’s possible to imagination – but about Statham himself. He’s quietly – okay, loudly – carved a niche for himself as Hollywood’s go-to action guy. Why? Because he’s very good at what he does. The proof of that is stamped all over Crank: High Voltage which, every time Statham is off screen, slows to a crawl.

Directors Mark Neveldine and Brian Taylor make a few too many detours without him (albeit in the admirable cause of giving the lovely Amy Smart more screen time), but have the good sense the rest of the time to keep their camera focussed firmly on Statham’s granite-hewn chops. But it’s not just his looks, Statham is an underrated comic actor, with great physical timing and a finely tuned sense of his own ridiculousness.

And it is ridiculous. That can’t be repeated enough. But maybe, just maybe, it’s something else too. On the one hand, High Voltage is the kind of film that makes McG seem like an understated auteur. But then again, the likes of McG, Bay, Anderson (PW, not PT) and Rob Cohen wouldn’t dare make a film like this.

Fixed on the 15-year-olds, they haven’t got the balls to take it this far. Neveldine and Taylor have made what the Americans like to call a ‘Hard R’, but more than that, High Voltage is a kind of anthem to the quick-cut – the apogee of ADHD filmmaking; the final frontier of the post-music video era. In that sense, it is absolutely of its time. More than that, it feels like an end game, a last act, an aesthetic requiem.

That said, if you can resurrect a man who’s fallen out of a helicopter, when it comes to what’s possible in the future, all bets are off.

Crank was absolutely mental. We’ll have more of the same please.

Go with your mates to a Friday night late show and you’ll all have a blast.

It’s bullshit, but it knows it is… 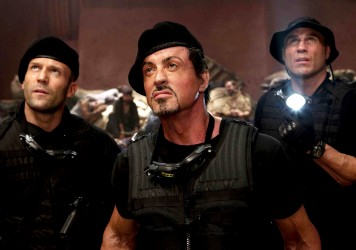