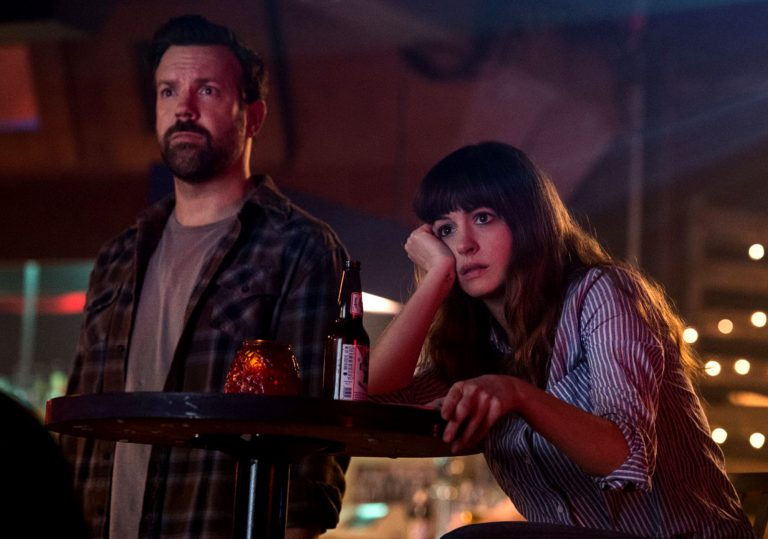 Hathaway is great, but the film is a disaster.

Surprisingly bland throughout but still manages to leave a sour taste.

This ultra-quirky Anne Hathaway monster movie is a total disaster – and not in the way it intends.

This is a strange and deeply silly film about a very serious issue. The novel premise concerns Anne Hathaway’s Gloria, an all-play-and-no-work thirtysomething whose return to her sleepy suburban hometown coincides with the reemergence of a Kaiju-like monster in Seoul. She leaves New York City under the pretence of remedying her alcoholism, but writer/director Nacho Vigalondo isn’t interested in examining the consequences of her addiction in any real or meaningful sense.

This is a bold choice of role for Hathaway (who also exec produces), and as such it’s a shame to see her so sorely let down by the material. Vigalondo’s heavy-handed script never settles into a satisfying dramatic rhythm, constantly over-stretching its central metaphor while offering almost no insight into Gloria’s condition. As events unfold her affliction becomes a source of great amusement and irritation for others; her self-pitying ‘party girl’ persona the fatal quirk of this tonally muddled, morally ambiguous film.

Hathaway imbues the character with a rough-hewn realness that transcends the script’s limitations, yet she’s undermined by the cynical and callous notion that Gloria’s suffering is self-inflicted, that she is somehow predisposed to being exploited by abusive and manipulative men. She’s a misguided goof who can’t seem to catch a break, as opposed to a victim whose habitual self-abasement is symptomatic of a toxic patriarchal system.

Jason Sudeikis and Dan Stevens vie for Gloria’s affections throughout, the former as her newly reacquainted childhood pal, Oscar. As the pair sink suds and set the world to rights at his hokey smalltown bar, all the narrative oxygen is gradually sucked up before – finally, frustratingly – Colossal reveals itself to be nothing more than a trite relationship drama. The monster movie conceit may prove an irresistible lure to some, but this is nowhere near as ambitious, funny or clever as it thinks it is.

Perhaps the film’s greatest sin, however, is the arm’s-length manner in which Vigalondo stages the seemingly random attacks in the South Korean capital. People die in their hundreds, buildings crushed like paper cups, but we’re never shown the effects of this devastation at ground level. To give the director the benefit of the doubt, perhaps this detachment was a conscious decision on his part – a way to keep us firmly invested in Gloria’s emotional arc. The problem with this is that pathos is not forthcoming, as the journey we go on with Gloria – full of unexpected twists and stupefying turns – leaves everyone exactly where they started.

Hathaway is great, but the film is a disaster.

Surprisingly bland throughout but still manages to leave a sour taste.