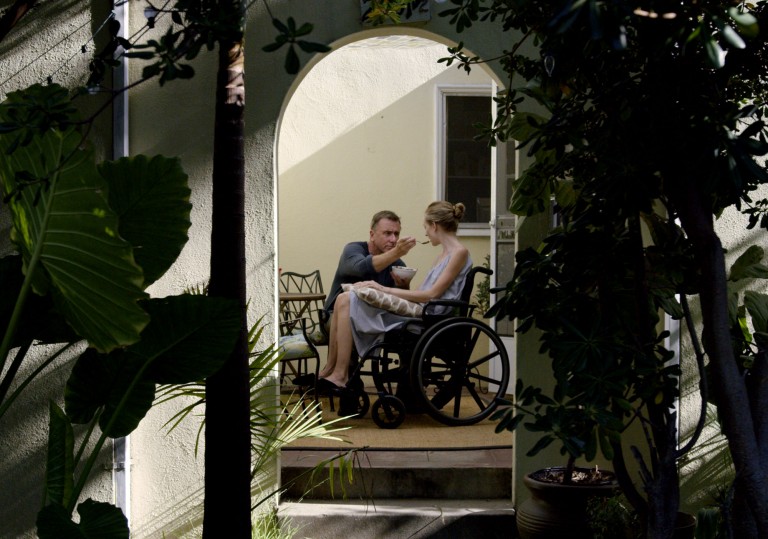 Michel Franco is a talented but raw director, this could go either way.

A difficult but sensitive and impressive piece of work... until it suddenly isn’t.

That ending leaves a nasty aftertaste.

Tim Roth was the president of the Cannes Un Certain Regard jury that awarded its top prize to the film After Lucia in 2012. After the ceremony he sought out its director Michel Franco to tell him how much he admired his film. Chronic is the result of that meeting. It’s Franco’s third feature and one of the most complex and interesting roles that the frequently under-utilised Roth has tackled in recent years.

After Lucia was a ceaselessly bleak study of teen bullying that felt cheaply sadistic and manipulative in its construction, but it also showed an impressive sense of craft and an uncompromising directorial vision. The presence of an Oscar-nominated actor in a first English-language film often suggests the softening of a foreign auteur’s approach to appeal to a wider audience, but that’s far from the case here.

Chronic follows David, a quiet and introspective caregiver, as he attends to a series of terminally ill patients in Los Angeles. David is methodical and dedicated, and there is little doubt that he cares deeply for the people he looks after. But does he care too much? When a complaint is made by the family of a stroke victim about David’s uncomfortably close relationship with him, Franco and Roth refuse to give us any clues about where the truth lies. Is David a pervert? Is he just lonely? Has he been misjudged? The waters are muddied by his undeniably odd behaviour outside of his patients’ homes, when he adopts aspects of their life stories for his own, and by the slow drip-feeding of dark revelations from his past.

Franco’s willingness to push this sense of ambiguity is admirable and Roth’s quietly mesmerising performance, which is developed through subtle body language rather than dialogue, keeps us hooked, wanting to know more. Franco’s style is clinical and detached, but he achieves a real sense of intimacy here, and as we watch David washing, clothing, lifting or simply being a companion to his ailing patients, we get a very real sense of the compassion and patience these duties require, not to mention the enormous emotional and physical strain involved.

At its best, Chronic is a remarkable portrait of the special relationship that exists between those who are looking death in the face and the people responsible for making their final days as comfortable as possible. Franco is helped enormously in this regard by the three very different, but equally outstanding contributions made by Rachel Pickup, Michael Cristofer and Robin Bartlett as David’s patients.

The film’s frank approach to the realities of dying marks it as a work of considerable maturity and intelligence, even if it grows a little less compelling in the final third as David’s relationship with a woman dying of cancer starts to take a turn for the obvious. However, nothing can prepare you for the way Franco ends the film; a bewildering act of self-sabotage that is so misjudged and so jarringly out-of-step with what came before, it undermines all of the film’s good work up to that point, ensuring that the ending will be the only thing dazed audience members will be talking about as they leave the cinema.

It’s a slap in the face for viewers who have invested in this story, and it’s a betrayal of these actors, whose painfully authentic work deserves to be the main topic of discussion rather than a young director’s glib shock tactics.

Michel Franco is a talented but raw director, this could go either way.

A difficult but sensitive and impressive piece of work... until it suddenly isn’t.

That ending leaves a nasty aftertaste.