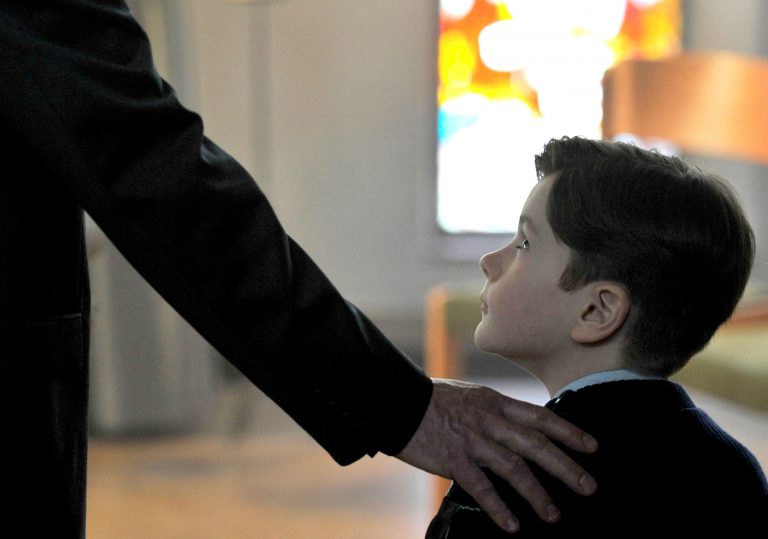 A new François Ozon film is always something to get excited about.

Despite some pacing and structural issues, it’s very moving.

Not Ozon’s most assured piece of storytelling, but a hard film to shake.

François Ozon’s career has zig-zagged in so many different directions it’s impossible to anticipate what kind of movie we’re going to get each time this prolific director returns with a new offering. His previous film, Double Lover, was wild, sexy and ludicrous, so it makes sense that he’d follow it with something more sedate, but you might be surprised at just how dry and sober By the Grace of God is.

It’s a film which explores the subject of sexual abuse in the Catholic church, detailing the very recent exposure of Father Bernard Preynat (Bernard Verley), who used his position as a scout master in the 1980s and ’90s to prey on dozens of boys. One such victim is Alexandre (Melvil Poupaud), a still-devout Catholic whose repeated pleas for justice made to Preynat’s superior Cardinal Barbarin (François Marthouret) are the focus of the film’s opening half-hour.

While Alexandre does confront his abuser – an agonising scene – the cardinal’s reluctance to meet with him means all of their correspondence takes place through letters and emails, with these epistolary exchanges being relayed in a series of voiceovers.

Ozon is usually such a nimble and imaginative storyteller, but this opening section is hard work. The back-and-forth feels dutiful and repetitive, and Ozon can’t find a way to spice it up visually, frequently settling for shots of Poupaud staring at a computer screen or looking concerned on a train as a letter is read on the soundtrack. An abrupt change of direction breathes much-needed life into the movie, when the narrative baton is suddenly handed to François (Denis Ménochet), another Preynat victim who wants to bring down the whole church in
a media blitz (his misguided suggestion of a protest in the skies above the Vatican is a rare moment of levity).

The forthright spirit François brings to the film is invigorating after spending so much time with the more circumspect Alexandre, and another fresh perspective is introduced with Emmanuel (Swann Arlaud), whose unhappy life and damaged body is an all too visible legacy of Preynat’s abuse.

Each of these men has coped with their abuse to different degrees, each of them has their own relationship with God, and each of them is searching for something unique from this process. The most potent scenes in By the Grace of God examine the myriad ways that abuse can mark a person’s life and distort their relationships with their family and others, and while this film doesn’t play to many of Ozon’s strengths, it does display his often undervalued gifts as a sensitive and intelligent dramatist. The second hour is full of understated but deeply moving moments, and the acting is exceptional across the board.

The template for By the Grace of God is obviously Tom McCarthy’s Spotlight, with Ozon even hanging a poster for that Oscar-winner in the background of one scene. Ozon’s film doesn’t have the investigative narrative thrust of Spotlight, however, and it lacks any climactic sense of victory; Barbarin was convicted of failing to report child abuse weeks after the film’s Berlin premiere, while Preynat was defrocked this summer. In any case, perhaps such a lack of conclusiveness is appropriate. This is a film about the victims of abuse and, as By the Grace of God makes clear, for many victims this is a story that has no end.

A new François Ozon film is always something to get excited about.

Despite some pacing and structural issues, it’s very moving.

Not Ozon’s most assured piece of storytelling, but a hard film to shake.