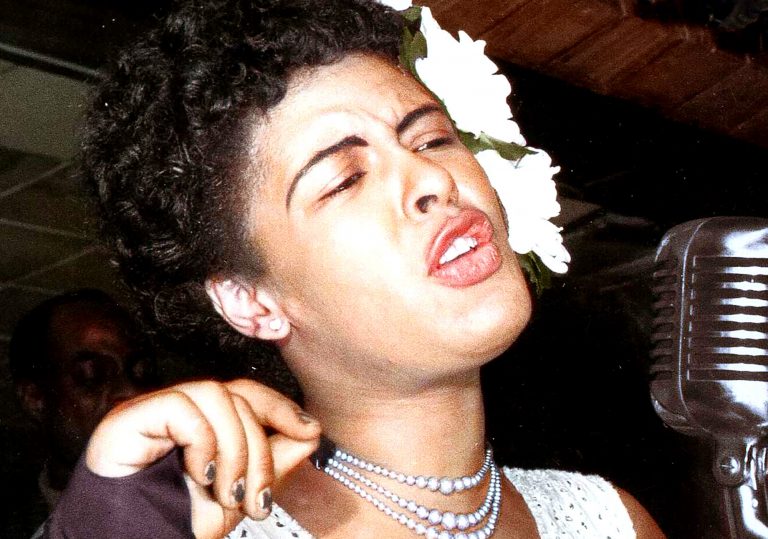 The release of previously unheard tapes of testimony from those who knew a Jazz icon personally.

A desperately sad tale, but told lovingly and engagingly for a real insight worth having.

A skilful, affecting documentary that gifts more than a conventional artist profile.

The story of one of Jazz’s brightest and most tragic stars is brought to life in this engaging documentary.

Interview tapes spanning eight years have been unlocked to tell the tumultuous, transfixing story of one of Jazz’s most influential singers, Billie Holiday. Director James Erskine curates journalist Linda Lipnack Kuehl’s unfinished passion project to give in-depth insights into Billie via those who knew her best. These intimate accounts may not be the easiest entry point for the uninitiated, but they tell an engaging, sad tale nonetheless.

I arrived at Erskine’s documentary with knowledge of Holiday as a transcendent Jazz icon, in possession of a distinctive style and bold spirit, illustrated by her 1939 protest anthem ‘Strange Fruit’. The documentary certainly upholds this passing proficiency via a treasure trove of unheard interviews with figures such as Charles Mingus, Tony Bennett, Sylvia Syms and Count Basie. Interspersed with stunning performances that have been restored in colour for the first time, this intriguing film charts Holiday’s rise from tough beginnings to a singer who commanded attention in every room.

This is no puff piece, however, as Lipnack Kuehl’s extensive interviews also provide key moments of contention. We hear Jo Jones, a fellow bandmate, and John Hammond, her producer, vehemently argue against each other, with Jones even becoming fired up towards Kuehl over the reasons for Holiday’s departure from Count Basie’s band. Hammond claims Holiday left after a pay dispute with Basie, while Jo contended Hammond fired her because she wouldn’t sing the Blues. Moments like this highlight not just the extensive level of questioning but the personal connection formed between interviewer and interviewee.

The details of Holiday’s origins are compelling, yet the documentary is at its most captivating when it reveals that, as wild and unapologetic as Holiday was in her personal life, she also endured abuse, often at the hands of those from whom she sought affection. This mistreatment accompanied personal torment and what friends referred to as “self inflicted suffering”. Holiday appears as one of the original tormented songbirds, believing herself undeserving of the very happiness she ached destructively for.

A melancholic image of a vodka-wielding Holiday, taken during her final recordings, is described as capturing “the shadow of death.” Indeed, Holiday died penniless in 1959, despite being one the highest paid Black artists in her lifetime. The film closes on Holiday’s final TV performance, a beautiful reminder of the immense talent that has secured her lasting legacy. Still, it’s difficult to escape the sadness that hangs in the air even after the credits have rolled.

The release of previously unheard tapes of testimony from those who knew a Jazz icon personally.

A desperately sad tale, but told lovingly and engagingly for a real insight worth having.

A skilful, affecting documentary that gifts more than a conventional artist profile.