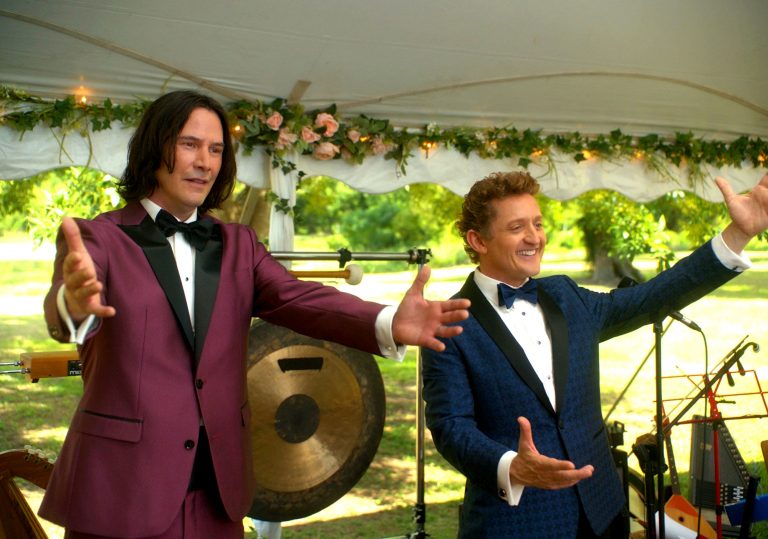 It’s been a long time since these righteous dudes rocked out. Long time.

Ah, yes, that’s why we fell in love in the first place.

The Wyld Stallyns return after nearly three decades out of the saddle. The result could hardly be more excellent.

A sharp-eyed viewer can always tell when the cinematography has been gamed to obscure an actor’s age. Whether it’s the smeary soft-focus lensing or the pancake application of wrinkle-smoothing makeup or Scorsesian CGI wizardry, it never looks quite right. These techniques usually yield the opposite of their intended effect, drawing more attention to the ravages of time and creating the impression of futile youth-clinging.

Credit to the cast and crew of Bill & Ted Face the Music, for gracefully maturing without relinquishing the juvenile spirit that popularised the members of Wyld Stallyns. This sequel to Keanu Reeves and Alex Winter’s sci-fi/comedy franchise arrives nearly three decades after the last instalment, and the script from Chris Matheson and Ed Solomon evinces a self-awareness of how this all looks. Namely: old.

Crisp ambient white lighting and hi-def digital shooting make every line on Theodore Logan and William Preston’s faces pop, their craggier visages in sharp contrast with their unchanged, adolescent body language and speech. A lesser film would fight the inevitable; this one accepts it with a tranquility that can be described only as Keanuesque, and concludes that age needn’t stop anyone from partying on. 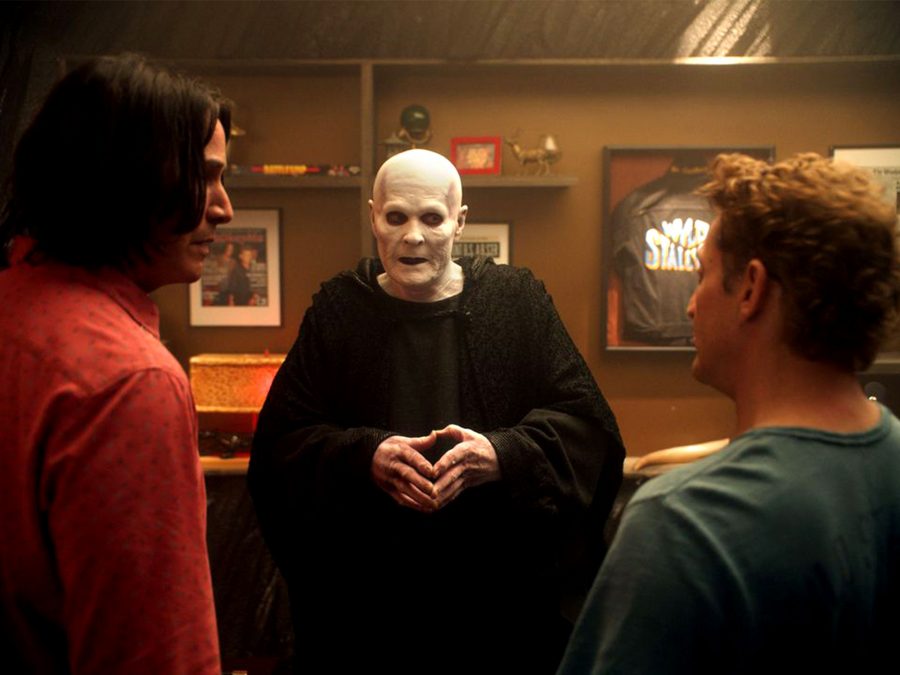 Without explicitly dipping into the meta, the set-up bringing Bill and Ted back together capitalises on the feeling that this property may have gotten long in the tooth, turning the air of desperation the enterprise could’ve had into part of the joke. After shredding with Death and saving the world, the guys from San Dimas slowly fell out of favour with the public. Increasingly eager to be liked, they kept releasing albums to diminishing returns, a force-the-love philosophy that also extends to their relationships with their wives (Erinn Hayes and Jayma Mays).

A couples therapy scene involving both pairs of spouses hits the Step Brothers high of pure absurd bliss, kindred man-children redeemed by their guileless positivity. After all these years, their infectious upbeat attitude has only grown more endearing for its juxtaposition with middle age.

The fate of all creation falls to them once again, as an emissary from the future (Kristen Schaal, portraying the daughter of the late George Carlin’s character) comes with a warning that only the most epic Preston/Logan tune of all time can save the universe as we know it. So begins a convoluted – on purpose, mostly – quest through time on multiple fronts, as Bill and Ted try to get the perfect song from their future-selves who have ostensibly already written it, while their daughters Wilhelmina and Theodora (Brigette Lundy-Paine and Samara Weaving, respectively) help out by assembling the greatest supergroup history has ever known.

It’s a lot of plot for 85-odd minutes, and that’s not even accounting for the neurotic robot Dennis Caleb McCoy or Kid Cudi’s appearance as himself, plus quantum physics expertise. But it all fits, breezed through with a larkish refusal to take any of it too seriously.

The only thing that really counts in this series is music and its power to unify across place and era, the essence of their mantra to “be excellent to each other.” A notion of rock ’n’ roll that now seems obsolete, replete with tasty licks and finger-breaking hammer-ons, has never gone out of style for our good boys even if the world has left guitar music behind.

This film makes us see it their way, compelling us to believe in concepts like “being true to yourself,” which would otherwise be unbearably corny. Bill and Ted’s steadfast affability brings an earnestness to their parting pearls of wisdom, and for a moment, being excellent looks like the most worthwhile human aspiration there is. Nothing bogus about that.

It’s been a long time since these righteous dudes rocked out. Long time.

Ah, yes, that’s why we fell in love in the first place.