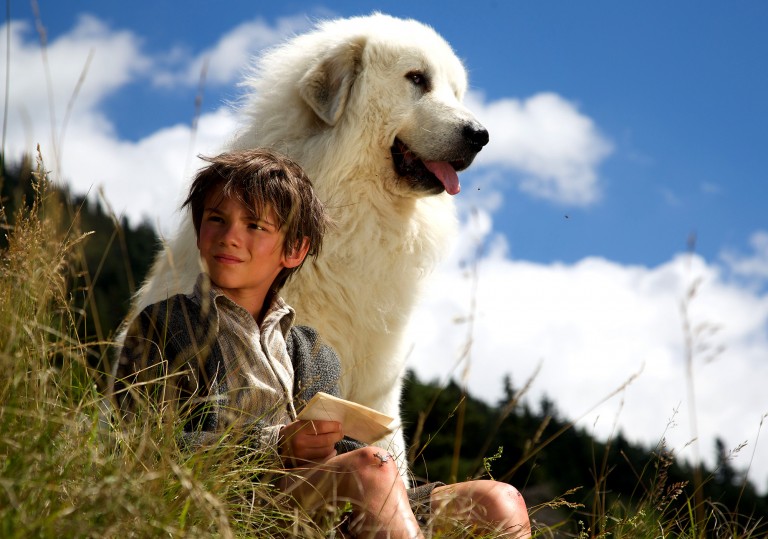 A promising young lead in Félix Bossuet, though it may test the patience.

Directed on one-worst-than-autopilot by Christian Duguay.

Despite the inference of its title, you really don’t have needed to have consumed any other Belle & Sebastian stories – through books, TV, films or otherwise – in order to swiftly attune yourself to the workaday wavelength of Christian Duguay’s super-saturated nightmare, Belle & Sébastian: The Adventure Continues. Note that this is nothing to do with the fey Scottish indie pop combo, but a insipid adventure yarn inspired by the characters of Cécile Aubry’s massively popular 1965 novel about a tousle-haired scamp named Sébastian and his trusty Pyrenean Mountain Dog, Belle.

The first shot of Sébastian is from the vantage of his scabbed-up legs, the camera panning up to reveal that he’s about to sled down a snowless mountainside for sheer shits and giggles. Though he’s quick to place himself in mortal danger at handy ten minute intervals, it’s lucky the anthropomorphised Belle is constantly by his side, there to pounce lest the little one accidentally veer off a cliff.

Helped little by the whiny, shrill performance by Félix Bossuet as our knee-high hero, the film takes us on a journey across the Alpine region of France in the period immediately following the cessation of World War Two hostilities. The boy and his dog are searching for Angelina (Margaux Châtelier), a woman who brought the boy up like a son and has gone missing since the transport plane bringing her back home crashed into a forest. Despite everyone believing her to be dead, plucky Sébastian retains hope and refuses to accept it, quickly escaping from his elderly uncle César (Tchéky Karyo) in a bid to bring his surrogate mother back to safety.

And if that doesn’t sound routine enough, it only gets worse as the film’s second phase comprises of a series of increasingly silly action sequences involving forest fires, aerial stunt manoeuvres, explosions and precarious cliff-side shimmying. There’s zero feel for the charm of the text or a desire to build the characters to more than set-piece linking devices. Even the very young might feel short changed by this one.

A promising young lead in Félix Bossuet, though it may test the patience.

Directed on one-worst-than-autopilot by Christian Duguay.