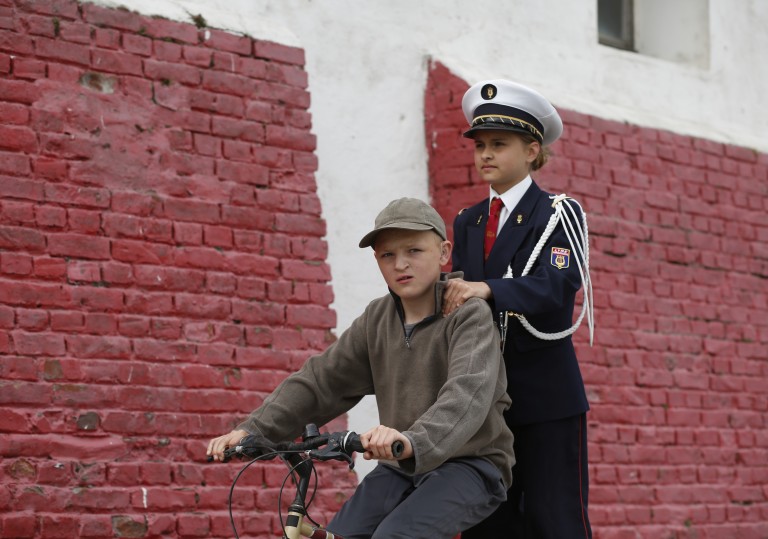 The idea of Bruno Dumont making a comedy just sounds so deliciously improbable.

Human remains stuffed inside a cow in a bunker. Funny...

A nation’s backward chauvinism wrapped in a mystery inside an enigma...

Let’s roll! The declaration of bungling, twitching Commandant Van der Weyden (Bernard Pruvost) of the National Police, as he and his partner Lieutenant Carpentier (Philippe Jore) investigate the grisly discovery of human remains inside a dead cow laid out in an old, barely accessible war bunker.

Yet with ever more corpses emerging, the mobility implicit in Van der Weyden’s catchphrase contrasts with Carpentier’s habit of making seven-point turns or driving in circles. This undynamic duo, much like their enquiry, appears to be going nowhere – although the macabre case does uncover all manner of half-buried historical and cultural tensions in a rural community of Northern France.

As much as human parts do not naturally belong in a ruminant, writer, director and artful miserabilist Bruno Dumont, maker of such films as L’Humanite and Camille Claudel 1915, is not normally associated with comedy (or TV) – but then P’tit Quinquin, his four-part mini-series made for French television, is an odd hybrid by any generic measure, showing all at once the bestial within the human, the devil in the haystack and something nasty in the woodshed. With its keystone kops, oddball locals and gruesome grotesquery, P’tit Quinquin is funny alright – but also deeply unnerving.

It is hard not to think here of the small-town surrealism of Twin Peaks (which Dumont claims not to have seen), as country and sea-side settings become the locus for all manner of bizarrely mysterious goings-on, and a microcosm for a state whose present attitudes are rooted in past strife. This is not the prettified France of Parisian postcards, but rather a mud-spattered milieu where historic wars have left a trail of memorials and munitions, where internecine feuds continue to be quietly waged, and where the National Front finds its tight-lipped majority.

Peripheral to the murder investigation, yet the central focus of the series and its title, is the pre-teen Quinquin (Alane Delhaye) – all at once little rascal, altar boy, tenderly innocent lover to girl-next-door Eve (Lucy Caron), and casual racist. Quinquin is both inheritor and embodiment of France’s future, and his cleft lip, squashed nose and hearing aid are counterparts to Van der Weyden’s facial tics and limp, or to the mental disability of Quinquin’s Uncle Dany (Jason Cirot), whose spinning, circular ambles recall Carpentier’s driving. They are signifiers of broader imperfection in the French idyll.

Presented in its unedited 200 minutes, this is big-screen binge-watching, and offers a meandering, ramshackle portrait of the state of a nation rather than the usual arc-and-resolution structure expected of a feature film. Yet the series’ place in the cinema is fully justified by Guillaume Deffontaines’ ’Scope lensing, which maintains a comically panoramic distance from all the pastoral perversity on display. The baroque body count is just a red herring, with France’s insularity, chauvinism and bad blood the real devil here. It’s a dark lesson in history which, released in the wake of the Charlie Hebdo massacre, seems all too prescient.

The idea of Bruno Dumont making a comedy just sounds so deliciously improbable.

Human remains stuffed inside a cow in a bunker. Funny...

A nation’s backward chauvinism wrapped in a mystery inside an enigma...