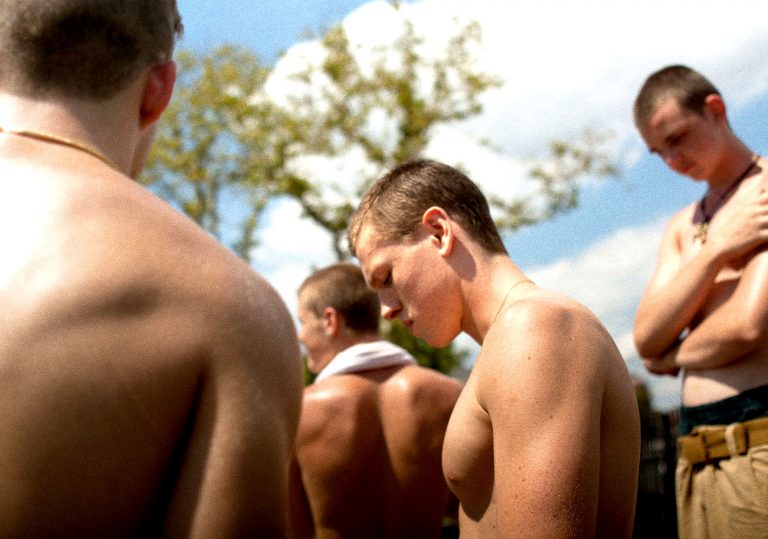 Excited to see Eliza Hittman’s follow-up to her great 2013 film It Felt Like Love.

The same, but different. Subtle, tragic and bracingly perceptive filmmaking.

A film that makes you feel for a guy with no feelings.

It’s a tremendously difficult thing that second-time director Eliza Hittman is doing with her affecting new film, Beach Rats. From the outset, that “thing ” looks like clear-eyed, unsentimental observation and careful, character-driven storytelling. But she also manages to capture and preserve a mood by presenting a subject who stands at a crossroads, utterly bewildered as to which path he should take.

Frankie (Harris Dickinson) is a rudderless bro who thinks he’s free to do whatever he wants. He’s acutely conscious of the fact that he’s hit a sweet spot in life that comes at the latter stages of an awkward sexual awakening. And this is a time before anything even close to adult responsibility hovers into view. Beach Rats presents the walls closing in on Frankie, but the audience only gets to see what those walls look like at the very last moment. Hittman lures us in with glistening washboard torsos and designer ennui, and, without ever resorting to moral judgement, asks the simple question over and over: hey kid, what are you doing with your life?

In America, the definition of ‘freedom’ has become a bone of contention between warring political factions. For some it means the ability to do whatever you want, whenever you want. For others, it’s a freedom afforded to the individual who chooses to live within a system. In Beach Rats, Frankie seems to be trapped between these two different visions of freedom, unwilling to let go of the former, and hesitant to accept the latter.

This non-judgemental film presents growing pains as a natural state of being. Even when Frankie is being a selfish dick (which is pretty much his default setting), he seems constantly wary of the fact. Through detailed body language, we see his sense of self-hatred evolve, but it never quite reaches the point where a newfound impulse of responsibility takes over. He’s a teenager who refuses to take hold of his life.

The film patiently watches as a Frankie flirts with girls on the beach during the day and cruises gay chat rooms after dark. His fluid sexuality is another marker of his refusal to conform. Even with the shield of a webcam, he lurks in the shadows, wanting to see what he’s got coming to him before revealing the goods he’s offering to someone else.

And yet, the film is too slippery and subtle to be solely about “me” culture and the perpetual desire to fulfil pleasures of the flesh. Frankie and his pals are driven by sex and drugs, and theirs is a search for the easiest and most direct route to those ends. Hittman, however, never judges her characters or scolds them for wanting to numb the boredom of plutonic relationships and elegantly wasted street slumming.

The film takes an ambivalent look at the locale of Brooklyn, at once a playground of youthful iniquity and a prison full of lost, desperate souls. Idle amusements are found in smoke ring competitions at the local vape shop, or at a nautical themed techno club. The emotional wallop that comes as the film ends is hefty and surprising. It’s hard to tell whether Frankie has been wheel-spinning for 90 minutes, or if he’s finally broken through to adulthood by reaching that lowest ebb.

Excited to see Eliza Hittman’s follow-up to her great 2013 film It Felt Like Love.

The same, but different. Subtle, tragic and bracingly perceptive filmmaking.

A film that makes you feel for a guy with no feelings.