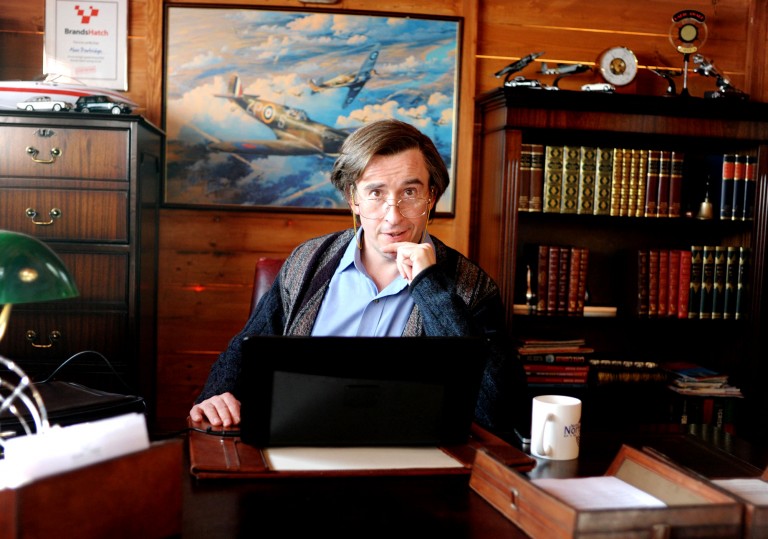 Silver-screen outing for beloved British TV character? It’s usually a recipe for disaster, but surely this is a can’t-miss.

Despite being chock-full of first-rate Partridgiana, the mechanics of the plot overwhelm the comedy a little too often.

A slightly unsatisfying experience, and unlikely to match the re-watch value of Partridge’s sublime TV excursions.

The opening credit sequence of Alan Partridge: Alpha Papa finds our hero (Steve Coogan) in all his outmoded provincial glory. String-backed driving-gloves grip the walnut-effect steering wheel of his sponsored mid-range saloon car (‘Alan Partridge Drives This Kia’). Slick, overproduced drive-time classic ‘Cuddly Toy’ by Roachford blasts from the sub-woofers and Alan proceeds to mime, drum-fill and bass-slap his way around the roads of his beloved Norfolk. His hard-rocking ecstasy is interrupted only long enough to berate a fellow driver for having their fog-lights on unnecessarily, before another rapturous chorus hooks him back into the groove.

It’s an initially hilarious sequence that is not only resolutely in-keeping with Alan’s own core Partridgian values but also gives casual viewers all the character information they need. Yet as the scene stretches on and on, it can’t help become a little tedious. Filmed entirely on a locked-off, dashboard-mounted camera, it also soon seems a trifle thin, blindly trusting that our love for the character will distract us from the paucity of directorial invention or comic ingenuity on general show. It pains to say it, but the rest of the film conforms to this basic pattern: sublime moments of character comedy that subsequently have the spark steadily pummelled out of them.

That isn’t to say that Alpha Papa is anything but an extremely funny 90 minutes. The Partidgisms come thick and fast, and are every bit as quotable as anything from Alan’s long and esteemed radio and TV career, but despite AP being firmly built around Coogan, Alan can tend to get a little lost in his own movie.

To clarify: North Norfolk Digital Radio, home of former TV superstar Alan Partridge is in the midst of a takeover by the corporate thugs of Goredale Media. When fellow DJ Pat Farrell (Colm Meaney) is sacrificed to the gods of programming, he goes more than a little off the rails, comes all the way back armed with a shooter and takes the radio station staff hostage. It is time for a Partridge to rise…

And rise he does, but he never quite escapes the stodge of the siege plot that takes up the main body of the film. Reasoning, perhaps, that the meaningless pedantry and self-defeating one-upmanship that swirl within Alan’s heart are not enough to build a movie around (note: they are), the filmmakers have instead reached for an off-the-peg, budget-friendly template with which to frame the humour. It’s an uncomfortable fit.

The siege genre is hardly a one that allows for the kind of meandering, discursive, everyday happenstance — everyday for AP that is — that might, for instance, see a morning meeting with some Irish TV execs morph into an afternoon spent running across fields pursued by a half-naked, worryingly tattooed superfan. The narrative rigidity (oh, how Alan would surely love that term) simply won’t bend that far. Instead Coogan and company have to scale back the whimsy in order to allow room for the creaky dynamics of the plot to work themselves out

The sections that bookend the siege are far more free-flowing and therefore more successful, especially the early scenes which document Alan’s celebrity/financial spiral via some delicious details. Gone, seemingly, is Alan’s self-designed folly Classic House, traded in for a modest detached estate-house complete with Business Centre (read: a converted shed) done out as thrusting modern office (read: decorated with oil paintings of Spitfires). That Alan has been reduced to voicing radio ads for a local discount butcher — “Yesterday’s meat at tomorrow’s prices!” — is equally telling.

Fans of Alan’s previous output will also be pleased to see such familiar faces as Lynn, Michael and Sidekick Simon. Even Alan’s on-air nemesis, physically failing alcoholic shock-jock Dave Clifton, gets a look in, but none of them are given anything especially funny or meaningful to do. Instead they play muted second fiddles to Alan, who himself takes a back seat to the restrictive demands of the rather workaday plot to which — somewhat ironically — his film has been held hostage.

Silver-screen outing for beloved British TV character? It’s usually a recipe for disaster, but surely this is a can’t-miss.

Despite being chock-full of first-rate Partridgiana, the mechanics of the plot overwhelm the comedy a little too often.

A slightly unsatisfying experience, and unlikely to match the re-watch value of Partridge’s sublime TV excursions. 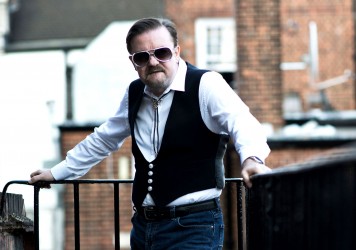 David Brent: Life on the Road

Ricky Gervais revives his most famous – and cringeworthy – comic creation in this lamentable spin-off.