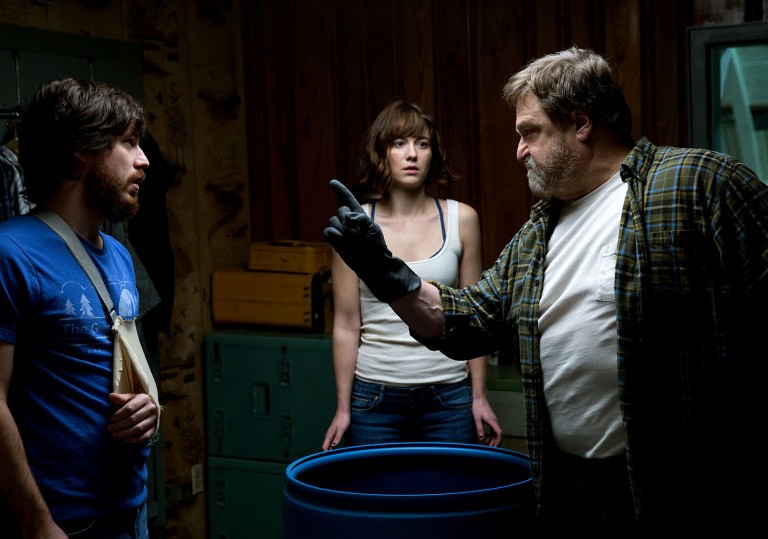 A smart and tense chamber piece that builds suspense carefully.

Back in 2008, Matt Reeves’ New York-set Cloverfield captured the intense panic and chaos that comes with unexpected, large-scale destruction. For the most part it was a whirlwind of unrelenting violence. But in its quieter moments, the film took time to reflect on the loss of human life, all seen through the lens of a hand-held camera. Though packaged within the same franchise, Dan Trachtenberg’s 10 Cloverfield Lane has little in common with its predecessor. It is instead a nerve-wracking and wry stand-alone thriller that mixes elements of sci-fi and horror while evoking a state of extreme paranoia.

We meet Michelle (Mary Elizabeth Winstead) fleeing in a state of panic after an argument with her boyfriend. She packs her things, leaves her engagement ring on the table and high-tails it out of the city, only to be met with further upset when she is involved in a high-speed collision which leaves her bloodied and broken. She wakes up in an underground bunker, a drip attached to her arm, not knowing whether those on the other side of the door are friend or foe.

An imposing and capricious presence lurks around the corner in the form of Howard (John Goodman, on fine form) a farmer and ex-Navy man unhealthily obsessed with conspiracy theories. He is joined by a young guy named Emmett (John Gallagher Jr) who claims he begged to be let in due to a chemical attack that has apparently wiped out the the human race. The question remains: what is the real threat, and where are the monsters?

The mysterious ambience persists throughout as our feelings towards the three leads fluctuate constantly. In a satisfying moment of symmetry, Trachtenberg opens his film in similar style to Reeves’ original by drawing his camera away from the outside world to focus on the interior of Michelle’s apartment. He settles on photographs and possessions until lingering on the abject fear present in Michelle’s face. And fear is what Trachtenberg plays with like a master puppeteer. The screenplay was initially written by newcomers Josh Campbell and Matthew Stuecken and later worked on by Whiplash director Damien Chazelle, and possesses a flair for human drama and a knack for switching between terrifying bursts of anger and quiet composure.

10 Cloverfield Lane maintains its sense of unease by focusing on how we manipulate power for personal gain, with people becoming mere pawns in a battle for psychological supremacy. Howard constantly reminds Michelle of the fact that he saved her life and she should be grateful for sanctuary he has provided. She’s stuck between a rock and a hard place, with the tacky pincers of oppression slowly closing. The film only allows its characters time to relax in short bursts. A happy family-type montage accompanied by ’60s pop music that suggests history is once again repeating itself. It’s a terrifying and suffocating place to be.

A smart and tense chamber piece that builds suspense carefully.