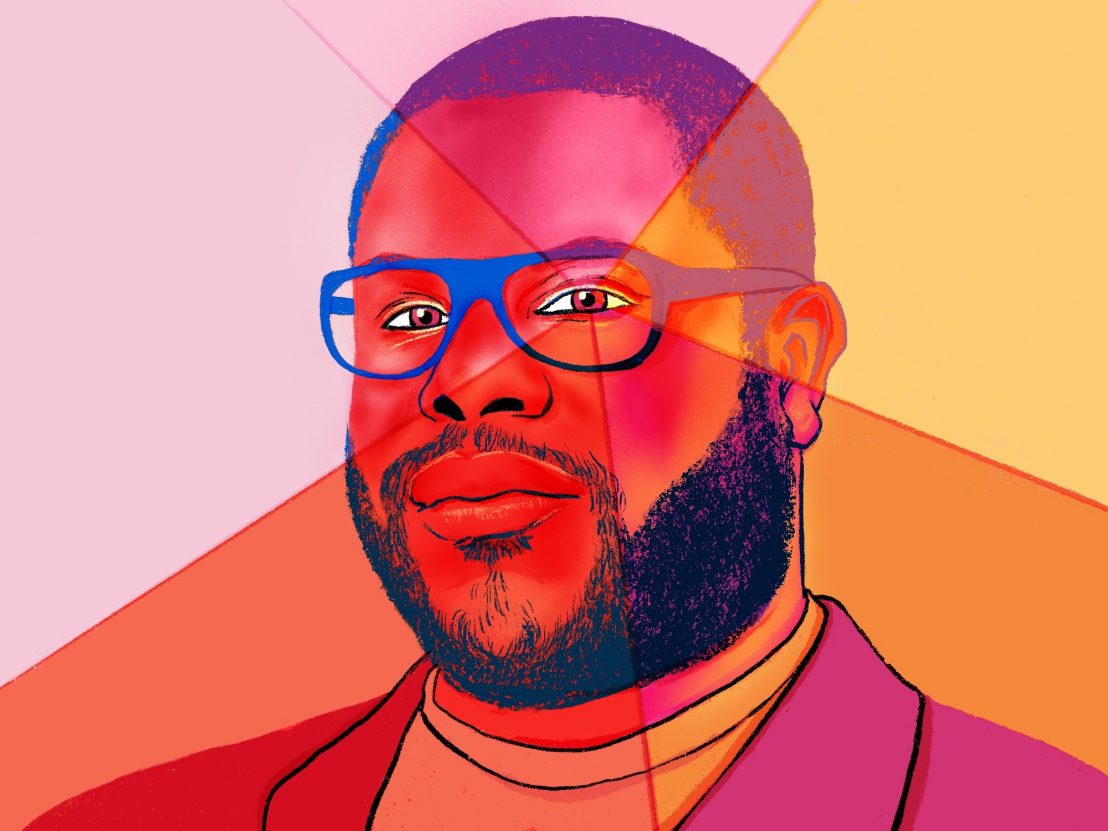 It took 11 years for Steve McQueen to get the green light for his anthology film series Small Axe, which tells five stories centred around London’s West Indian community from 1969 to ’82, ranging from a Dub and Lovers Rock dance party to the trial of the Mangrove Nine.

Set in part against a backdrop of police prejudice and brutality, and arriving in the wake of George Floyd’s murder and this summer’s Black Lives Matter protests, McQueen’s passion project feels even more urgent and necessary. Here, the director speaks about the process of conceiving and shooting his most ambitious and personal undertaking to date.

LWLies: Small Axe was 11 years in planning and six months in the making. What was it like to say goodbye to your crew when you wrapped production?

McQueen: It was difficult because of Covid-19. It was an odd situation not to be able to embrace your colleagues. It’s kind of weird when you’re supposed to arrive at this cathartic moment, or you have a wrap party, but have none of those things. It was a really weird goodbye. At the same time, we’re still finishing it. There are a couple of nips and tucks being done as we speak. So it is what it is.

So you wrapped just before the pandemic hit?

We wrapped production, but there were these eight to 10-day pickups. That was a lovely situation at the end when everyone got together again for those. We were the first crew to shoot on location during lockdown and of course all the measurements and precautions were taken very seriously.

I spoke to [DoP] Shabier Kirchner about Small Axe and he made the distinction that in making these films you’re writing untold stories into history, rather than rewriting history.

It is rewriting history because it’s looking at everything differently. When you plant things into history everything changes, because your perspective on things changes seamlessly. For example, how the majority of the people in the UK looked at the police. For many decades, Black communities have been talking about how the police are not good. For a long time in the UK there was a slogan, ‘The Best Police in the World’. But now everyone’s caught up with the West Indian community, and we’re seeing the police in a very different light. So that changes history, changes the perspective of how our people saw that institution. Now they know what happened to those people, undercover policemen involved with the Stephen Lawrence family and all the dirty tricks with the families involved in protests and so forth. And that’s just the tip of the iceberg.

With Mangrove and Education, they’re almost shot as they would have been in their respective eras.

That also had to do with the colourist Tom Poole. What I was after was how it could have been shot then, because of the Kodachrome. Mangrove has a sort of epic quality to me, it starts off small but ends in the highest court in the land. Frank opens up a café, a hole in the wall in Ladbroke Grove, and ends up in this place that is about the institution of justice, Old Bailey. For this trajectory, it needed to be 35mm – but also, Kodachrome was the photography of that time. Again, it wasn’t actually how it was, but it was what was at hand then. So that was very key to getting us into that world. I was really interested in looking at Gordon Parks’ photography; not necessarily his compositions but the colours within that. And [William] Eggelston as well, from that period.

You shot all five films on a different format.

It was horses for courses. If all five films had to be shot on 35mm or digital, fine, but what we were interested in was the aesthetics of each individual story. For example, Lovers Rock was digital. It was digital because of flow. We wanted to capture things in the flow of sound. Education was 16mm, and it reminded me of a series that was shown on the BBC called Play for Today. I think it was every Thursday evening, they’d have small films that were usually very topical. I remember those films sticking to me. The texture was… I wouldn’t say grainy, but they clung to you. Maybe because the subject matters were very indicative of the time it sort of stayed with you.

So, I knew I definitely wanted to shoot Education on 16mm, and there were a lot of problems with that actually with transmission, but BBC was very accommodating in the end. Alex Wheatle was the Sony Venice. Again, that’s a journey. There’s a speed that we needed with that. Red, White and Blue, there’s an epic quality because there’s a kind of heartbreaking, [Elia] Kazan element to that story. But also it’s very critical and very much about the family too, now that I’m looking at it in that way.

“The fact that we’re talking about what happened to George Floyd and comparing it to Small Axe – this could have come out at any time and it would be timely.”

Was there much downtime in between shooting?

No. This was made for a little bit of money. But one thing I know how to do as a British filmmaker is structure pound. We had to learn how to do that. It’s incredible. When you find out the budget you won’t fucking believe it. How many of the films have you seen?

The three available. Alex Wheatle and Education are still being coloured, right?

Nips and tucks. You’ve only got one chance to see something for the first time, so you should see it as it’s intended to be seen.

How do you think the rapid pace of production informed how the films feel?

All I will say is that people say I’m fast. But I don’t know that I’m fast. I’ve never been on anyone else’s set before. But apparently I’m fast and I don’t know what it means. Just get on with it basically. There has been a meticulous amount of planning. This has been going on for 11 years, working with [executive producer] Tracey Scoffield, having a writers’ room, and that writers’ room evolving and changing, auditioning circumstances, like writers I wanted to work with, which was Courttia Newland, Alistair Siddons and Alex Wheatle to tell his own story. This has been in planning for a long time. There have been over 150 interviews done by Helen Bart and myself in research. It gets to a point when you have all that in your arsenal and it’s time to go. Let’s shoot.

Shabier also told me that, in the climactic scene in Mangrove where Altheia [Letitia Wright] confronts Frank [Shaun Parkes], who is considering giving up, you told him to give the scene entirely to the actors. The environment was lit, but the camera movement was theirs to dictate.

Nothing’s done by chance. Frank sees for the first time what the audience sees for the first time. There’s no construction in planning in what you might see, other than planning what you might see. There’s no situation where it happens and we’re just lucky. There’s no luck that comes involved with it. Structure and meticulous planning comes in, because I don’t know what he’s going to see and neither does the audience. That’s exciting! That’s dynamic! That is what is putting the tension into that discussion and it’s one of the most important scenes in the film. Frank is challenged. Are you with us or are you against us? So you want it to be first-hand.

You’re working with a different crew here and in a different manner than your previous films. Was there a conscious effort to make these films differently?

I don’t know about ‘different’. The subject dictates to me how it wants to be filmed. I don’t come with a stencil and say it has to be done this way. I’m here to service the story. Of course, it’s with my hand, but I have to listen to the story in my own way to understand what the story wants and needs.

The word ‘timely’ is often used in a way that can reduce the issues of a film which happens to feature Black resistance to just the current moment, when in fact it’s a timeless battle that’s been fought for about as long as we can account for.

‘Timeliness’ doesn’t really reduce or is exclusive to Black movies. Any type of film at any point in time can be timely. So it doesn’t put itself exclusively on Black films or Black subject matters at all. The fact that we’re talking about what happened to George Floyd this year and comparing it to Small Axe – this could have come out at any time and it would be timely. Until things change, these stories will always, unfortunately, be timely.

Lovers Rock premiered at the New York Film Festival at a time when we really needed the dopamine.

It’s a celebration of all the senses, sensuality and sexuality in a time of lockdown. For me it just says we take so many things for granted. Lovers Rock came out at NYFF and the response was tremendous, and I’m very grateful for it, but at the same time it must ask us to do a double take. If we haven’t learned anything from this period of time then we’ll never learn. I think we all learned something about what we want to do with our lives. I’m not trying to put some pressure on the film, like everything has to be serious.

Obviously, this is about a party, about people falling in love and being themselves. I suppose for lacking the kinds of sensations we feel in Lovers Rock, being in lockdown, it sort of heightens the senses of what we take for granted. That’s all. We deny we take things for granted until we see how precious it is. Maybe this film has helped people to do that. In any case, I hope it would have done that, and if not that, grown a love for Dub and for Lovers rock.

I imagine you listened to the tracks in Lovers Rock over and over during production. How do you achieve a rhythm when you’ve been exposed to the music for so long?

It’s intoxicating listening to that music. I never get tired of it. And I always find something new in it. It’s not a problem at all, in fact it kind of pins you down in a way. I didn’t have that problem at all. It was a joy. A real joy.

Small Axe is screening on BBC One in the UK weekly on Sundays at 9pm GMT, with each feature-length episode available on iPlayer after. In the US, instalments will be added to Amazon Prime Video beginning Friday 20 November.