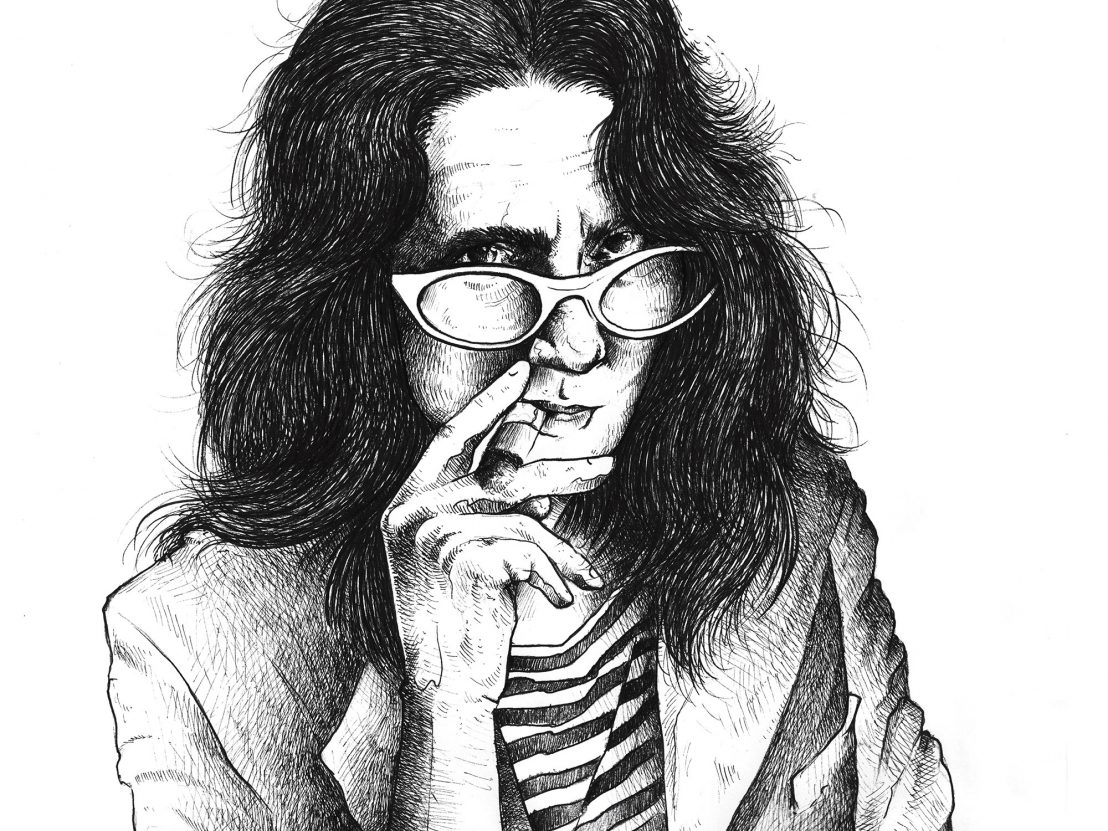 It’s been nine long years since the release of The Headless Woman, the previous feature from one of the leading lights of the new wave of Argentine cinema, Lucrecia Martel. Having spent almost two years on an aborted adaptation of graphic novel, ‘El Eternauta’, she turned her attention to Antonio di Benedetto’s ‘Zama’, one of the key works of mid-century Argentine literature. Following a difficult, protracted production, the film finally premiered at the 2017 Venice Film Festival. To say it’s been worth the wait would be underselling one of the great cinematic achievements of the decade. We sat down with the master filmmaker to talk adaptation, representation and cinema’s moral obligations.

LWLies: What can you tell us about the aborted science fiction film you were working on before Zama?

Martel: The interesting thing about that project was the way that it enabled me to think about time and how best to represent it. Because that film didn’t happen, I had all these ideas about time when I came to read ‘Zama’. I want to say this because I think it’s important for producers to know: when a writer is contracted to write a script, they don’t write it up in periods accorded by money. So someone asks you if you want to make a film, and that very same day you get immersed in the project, then more and more so as each day goes by.

It must be heartbreaking when a project falls apart having spent so long on it. Are you able to be philosophical about such instances?

It was very tough indeed. The conflict in that project was over money, but then it’s never really over money; it was about trust and about the idea. Underneath everything it was finally about a lack of trust from the director in the producer’s work, and a lack of trust from the producer in the director’s work. The script of El Eternauta ended with the survivors of the mission travelling up the Paraná River to Asunción, which is what I did. To escape from El Eternauta, I took a boat upriver – an old wooden boat, wholly inadequate for the journey. I wanted to reach Asunción too, but I didn’t. On that boat, I read ‘Zama’. At the start of the book there’s this image of a monkey coming and going with the ow of the river. It’s an image, I think, that really reflects the writing style of di Benedetto. I don’t know how it is in the English translation, but many times as you’re reading, you find yourself having to go back to re-read passages, so it’s like you’re always going backwards and forwards.

Science fiction seems to have bled into Zama in an abstract sense. It’s historical fiction but also somewhat alien, almost out of time.

If we stop and think about it for a minute, a film about the past is really science fiction. When we think about what science fiction is as a genre, it’s about technological development in the future, but the basis for that technology is in the present. So we imagine a potential future development in sci-fi, but our chances of being right about that are based on where we are right now. It’s the same with the past. The most tangible thing about the past is what we did ourselves, and we know what that was. The present is what is left of our past. If we want to project far back into the past, it’s the same process of imagination as looking into the future.

I would even say that history is more arbitrary than science fiction, because history is written according to what you want it to show. For example, the history of Latin America is written by colonialists, it was written by those who were abusing their power in order to serve their own interests. There’s proof of this today in all Latin American countries. They believe themselves to be modern democracies, and yet not one of them has an indigenous population that isn’t living in abject poverty.

So what’s the process of deciding what you’re going to include, omit or embellish when it comes to your historical research?

What I decided, with a certain degree of common sense, was that it wasn’t possible for the slaves and servants to spend the entire time being submissive. No one, not even in Guantanamo, spends their entire time being submissive. I always thought it was curious that period dramas always showed extremes of submission or extremes of rebellion, there was no in-between. I think there is a state which we see today, where people who are economically and socially repressed lack belief or faith in the power that is oppressing them.

So I applied common sense to it, imagining a people who don’t always comply with this oppression, more like it was a state of conspiracy. That was the idea, and with a few details you can get it across. Given the tone of the film is one of absurd humour – it’s not a serious work about heroes of the past – it was easier to get that across.

Do you think your take on the character of Zama is more sympathetic than di Benedetto’s?

You omitted some of his more diabolical acts from the novel, the rape scene for instance.

That scene was actually going to be in the film, but in the novel there are a number of scenes that work only in relation to each other. That was one, and there was another in which he had to sleep with someone in order to get some money. In the end, we didn’t have the money to include one of those scenes, and if I wasn’t going to include one, then I couldn’t include the other. In any case, I still don’t know how to go about filming a rape scene without humiliating the woman in some way.

Twenty-five times every hour, you hear about a woman who’s been abused or killed by her partner, her ex or her family for sexual reasons. We’re all deeply troubled by this phenomenon of femicide we have in Argentina. I don’t want to see this problem because I don’t want to depict it – you don’t want to turn a blind eye to it – just that if you want to have a serious discussion about it, you have to find a way of doing it without somehow implicitly endorsing it, or satisfying any hidden curiosity to see it.

Do you find that cinema often neglects its moral responsibility when it comes to depicting acts of violence?

It’s one of the most difficult things to talk about in this industry. You get a lot of North American films, right back from the time of the westerns, where they depict a binary split between the forces of good and the forces of evil. Evil depicted as massacring Indians, or Nazis, or Russians. In order to bolster this discourse, these films show images of war that demonstrate how awful they were, with the United States positioning themselves as a benevolent force in pursuit of war for the good of humankind. A discourse against those who wage war then becomes a justification for war. It’s senseless.

Today what we’re getting is a real effort from the West to depict the true enemy as Islamic terrorism, and again we’re going down the wrong path. The answer, the response to violence has become yet more violence. It’s very important to talk about, because today we’re building up this ‘enemy’, who in certain respects consolidates this image through their actions, but I don’t think that after any terrorist attack we have in London, for example, there is any serious thought about all the violence that is exacted upon Eurasia, Asia Minor or Africa. The only thoughts are how to bolster security and level more attacks against them. It’s awful, because we’re building up this huge lie that Islamic terrorism is so awful because it targets innocent civilians, which is almost justifying the idea that if a war is waged between soldiers, and only soldiers are killed in the ring line, then that’s somehow legitimate.

And art is just as culpable as the media in its representation, presumably?

It’s an idea that I think everyone contributes to. We are all responsible for this. I really can’t understand how we can’t see that a terrorist attack is no different from a bombing of terrorists. All of these serve to kill people. It’s the same thing. What we’ve done is create the notion that anyone of Arabic descent or origin is seen in the image of terrorism, the incarnation of terrorism, while if we see a western soldier, the image we have is one of protection, of security. But anything a soldier has on them is they’re only either to kill or protect themselves.

In the West, we’re losing freedom to a certain extent, because now if I walk through London or other touristy places, I feel scared. While in the past, wars would be waged elsewhere, now they’re coming on to home turf. We’re getting a sense of what this feels like. Fear is being brought to us, which was something we previously didn’t have to face. It used to be a feeling exclusively for the lands we went to colonise, but now we’re being forced to face up to it ourselves, and we’re not learning from it.

Do you tackle these questions of representation and responsibility in the filmmaking masterclasses you regularly hold?

What I try to do in those workshops is let people see the limitations of their way of thinking, and to help them find tools to disrupt or subvert these ways of seeing the world that they’ve learned. Many people are numbed by their own perceptions, because it’s actually quite useful for us as people to not be quite so aware of the way we think. I want them to be able to see injustices in the world that are dressed up as something else. Questions of representation are of course an issue, but more so, even, is perception. If you were to sharpen your perception, then representation would become much more interesting. Which is why it’s so important how we choose to represent Islam, for example, because we’re using the same ingredients we’ve always used, the same ingredients that led to the great wars of the past.

Zama is released 25 May. Read the LWLies Recommends review.