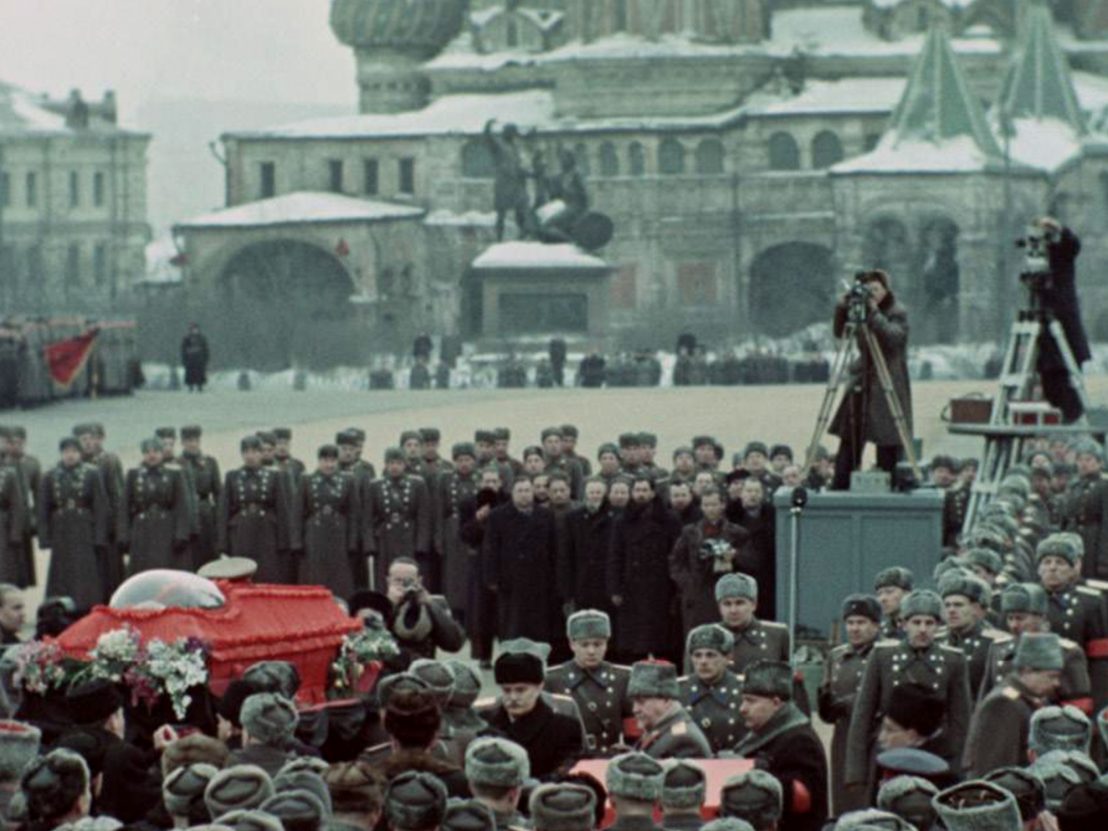 A chilling doc on the bizarre spectacle of the Russian people grieving over the death of Stalin.

Feature-length documentaries have become such a sophisticated art form, filmmakers increasingly have to have something truly extraordinary up their sleeve to win over an audience. If unseen archive proves the greatest treasure of them all, then this uniquely Soviet endeavour surely knocks it out of the park.

Drawing on extraordinary footage, both colour and black and white, which has been beautifully restored, State Funeral is a sobering document of a nation caught in the grip of mass mourning. Stalin remained a remote, vague outline of a figure to millions of Russians and is here clearly marketed by the state as an icon, a tower of strength and self-sacrifice, rather than the tyrant he actually was.

The film begins with Joseph Stalin’s body lying in state, surrounded by an enormous display of flowers that threatens to engulf him at any moment. In a display of blind obedience – with a device that is repeated over and over again in this subtly arresting film – everyday Russians (and later dignitaries) file past to pay their respects. Queues of people line the streets at every turn. The sight of this is staggering, given what we know now about the man and his brutal policies on his own people.

Set against a near-continuous score of classical wonder (Schubert and Tchaikovsky feature, as do others), we travel the length and breadth of the former USSR (or at least, appear to), as rural and urban communities of all shapes and sizes cease their activities to remember their leader. Almost as continuous is the hypnotic, near-monotonous drone of rousing passages of detail read over over public address systems, which list all manner of information about their late leader – including, even more strangely, his medical ailments and official cause of death.

For those not familiar with Sergei Loznitsa’s remarkable body of work (the acclaimed, multi-award-winning filmmaker makes drama and docs in equal measure), discovering a film like this will prove a revelation. Rarely, if ever, have we seen state-sponsored pomp and ceremony on such a breath-taking scale. Given this was a time when communication was more commonly shared via words on a page or a voice on radio rather than on screen, it’s even more alarming when one draws a parallel to today.

It’s not beyond the realms of possibility, for instance, to imagine Putin or, for that matter, Trump concocting an elaborate series of events to officially mark their passing, should they still be in power when their lights go out. The means of communication may well be different today, but the sheer naked ambition to rule with an iron fist and present a concocted narrative of absurdist fiction remains alive and well.

State Funeral is meditative and thoughtful, rather than bombastic and brash – and there isn’t a great pay-off at the tail, either. But as a wry piece of intelligent and measured filmmaking, it leaves an indelible mark, a powerful resonance that proves impossible to shake off.

For those left wondering where the source of all this footage lies, some answers can be found neatly tucked away in the film’s final credits. Ever the political animal, Loznitsa’s follow-up to last year’s The Trial (also at Venice) is everything you could want it to be and more.