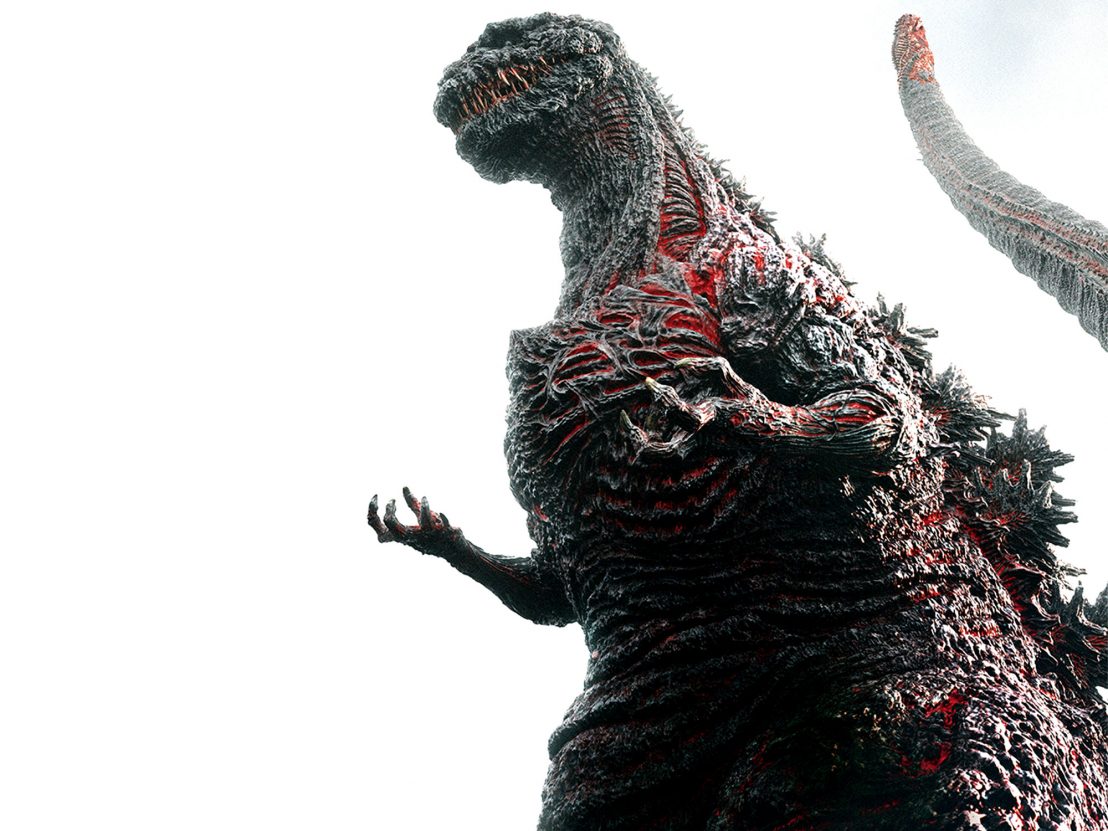 Godzilla first struck Tokyo in Ishiro Honda’s eponymous tokusatsu kaiju eiga (live-action monster movie) from 1954, in which the saurian monster from the ocean’s depths embodied the destruction and aftermath of hydrogen bombs dropped on Hiroshima and Nagasaki by the Americans at the end of World War Two, and Japan’s enduring anxieties over America’s nuclear tests in the Pacific.

Since then, the colossal creature has appeared in 29 films produced by Toho (thus holding the world record for longest continuously running film franchise), as well as having several American incarnations. You might imagine, then, that there can be nothing new about the lumbering lizard king. Yet Hideaki Anno and Shinji Higuchi’s Shin Godzilla (literally ‘New Godzilla’, although the alternative international title is Godzilla Resurgence) works hard to be different, and to evolve the series.

For starters, this reboot (Toho’s third) is set in a contemporary Japan that has never previously encountered Godzilla in any iteration, and that is genuinely taken by surprise when a gigantic aquatic beast surfaces in Tokyo Bay. Godzilla fans may be surprised too, as this particular version of the monster at first looks strikingly different from the creature of canon: smaller, and more inclined to horizontal postures, as it crawls along the Tama River on all fours, sending boats and buildings scattering before its shuffling forward momentum. Yet this irradiated avatar keeps evolving and growing, soon taking on Godzilla’s more familiar form, only with a much larger tail and some awesome new defensive capabilities.

If this film rings the changes on Godzilla, it does much the same for Japan’s 20th and 21st centuries. For while we do at one point glimpse black-and-white photos of a devastated Hiroshima, and hear about the unregulated dumping of nuclear waste on the ocean floor, the later expressly took place “60 years ago”, while the former occurred in the time of one character’s grandmother. Which is to say that the real-life events inspiring the original Godzilla now happened several generations in the past. Meanwhile the mutating dinosaur has come to reflect more recent Japanese disasters: specifically, the 2011 triple whammy of the Tōhoku earthquake, the ensuing tsunami, and the subsequent meltdowns at the Fukushima Daiichi Nuclear Power Plant complex.

Those events are evoked not just by the spectacle of Godzilla emerging explosively from the sea to flood, flatten and irradiate nearby populated areas, but also by the sight of blue-suited government officials inspecting ruins, conducting mass evacuations, and eventually exposing themselves to radiation (like ‘the Fukushima 50’) for the common good. There is also something about the way Shin Godzilla’s story is mediated through rapid cut-ups of found footage, news reports, camera phone video and more ‘objective’ filming that makes it seem very much a product of our own times, even as the creature itself combines old-fashioned puppetry and animatronics with new(ish) CGI.

Godzilla’s strange and ever-changing nature goes some way to compensate for effects that are at times decidedly ropey, much as the relentless pace of the action and editing makes up for some very flat characterisation. Satomi Ishihara’s Japanese-American Presidential envoy Kayoko Ann Paterson is particularly annoying, all chirpy and superficial when those around her exhibit a more appropriate gravity, and uttering some of the film’s dumbest lines.

Hiroki Hasegawa is better served as hero Rando Yaguchi, a maverick yet morose Deputy Chief Cabinet Secretary whose willingness to think outside the box propels a plot that is, despite some monster mayhem, focused for the most part on the human logistics and processes of emergency response. And with the adaptable Godzilla now undergoing constant metamorphosis, sequels could take on all manner of new forms.

Shin Godzilla has its European Premiere on 24 February, as part of the Glasgow FrightFest.