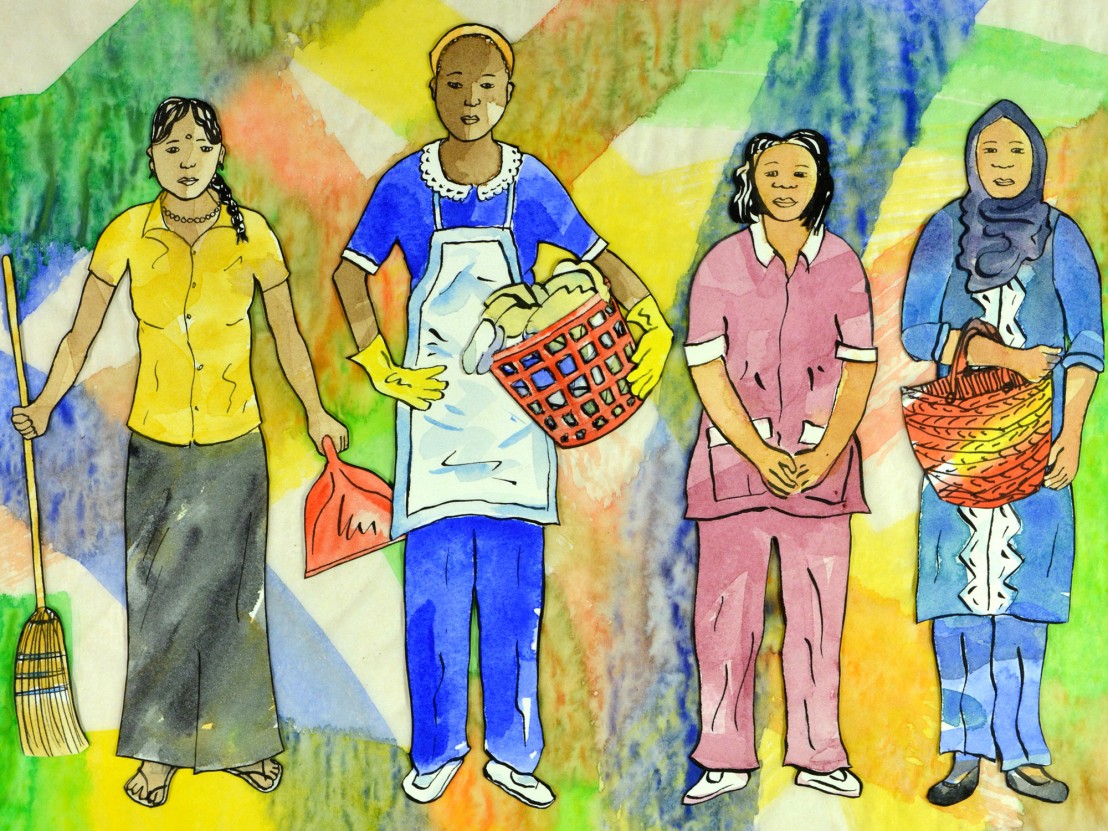 Refugee women from beyond the Middle East made their voices heard at this year’s festival.

The London Feminist Film Festival is on a mission to inspire activism and discussion, to support women directors and to ensure that feminist films are seen by a wider audience. Since the festival was established in 2012 the term “feminism” has evolved – its profile has risen thanks to numerous celebrities and public figures identifying themselves as feminists, including President Obama in a recent magazine profile in Glamour, while growing concern over the lack of gender equality and racial diversity has also affected its image. This year the LFFF showed its keen interest in the latter, devoting screenings and discussion time to those women who are most vulnerable today: migrants and asylum seekers.

Coming at a time when the topic of refugees is hotter than ever and all eyes are on Syria, the LFFF broadened the discussion to African women refugees and the challenges they face at their country of destination. Opening with a 25th anniversary screening of Pratibha Parmar’s 1991 film A Place of Rage – a celebration of African-American women within the context of the civil rights, black power and feminist movements – the programme contrasted this empowered history with later screenings of Priya Sundham’s short animation Set Her Free and the Women’s Resource Centre directed documentary Women Speak Out! Ntombi. These films tell the stories of women refugees who had arrived in the UK only to find themselves detained at Holloway and Yarl’s Wood prisons.

In an lively post-screening panel discussion led by campaigners from the Women’s Resource Centre and Women for Refugee Women, South African dancer, musician and ex-detainee Ntombi underlined the bond between creative self-expression and survival: “Art is my way of breathing. It’s how I escape. When things are difficult I sing or dance my heart out.” Her responses got everyone thinking, questioning and asking how to help, while Melissa Chaplin from the Researching Multilinguality at Borders project reminded of the powerful connection between social justice and film: “film allows people to see through another’s eyes, and can help us to understand.”

The collection of documentaries, short films, and animations also included the European premiere of Magenta Baribeau’s 2015 documentary No Kids for Me, Thanks!. Featuring Western women who decided not to have children, it explores the frequent equating of a women’s worth within society with motherhood. A darker version of ‘Little Red Riding Hood’ in the form of Canadian filmmaker Rebecca Murrell’s The Trees offers a beautiful palette of black, grey and splashes of red in an visual style that will please any fan of silhouette animation. With its welcome look at the clichés and expectations women face today, The Trees adds that visually exciting touch missing from straightforward documentary.

Though the mood is engaged and the subject urgent, this year’s programme also included funny and warm additions. One Thousand and One Teardrops, an award-winning animation by Iranian newcomer Fateme Ahmadi, uses cut-outs and archive footage in a tongue-in-cheek look at the contentiousness of women’s clothing in Iranian history. Credible Likeable Superstar Role Model by Rebecca Brand is a self-described “pop-u-mentary” about an alternative tween role model, and highlights the hyper-sexualised world of marketing to seven to 12-year-old girls. The uplift also stems from something the whole programme, and the experiences of the women involved, have in common: art is a vehicle for freedom when obstacles are structural and entrenched. The LFFF captures that balance well: it is clear about its campaigning agenda, but provides an inclusive weekend for discussion through film and storytelling.