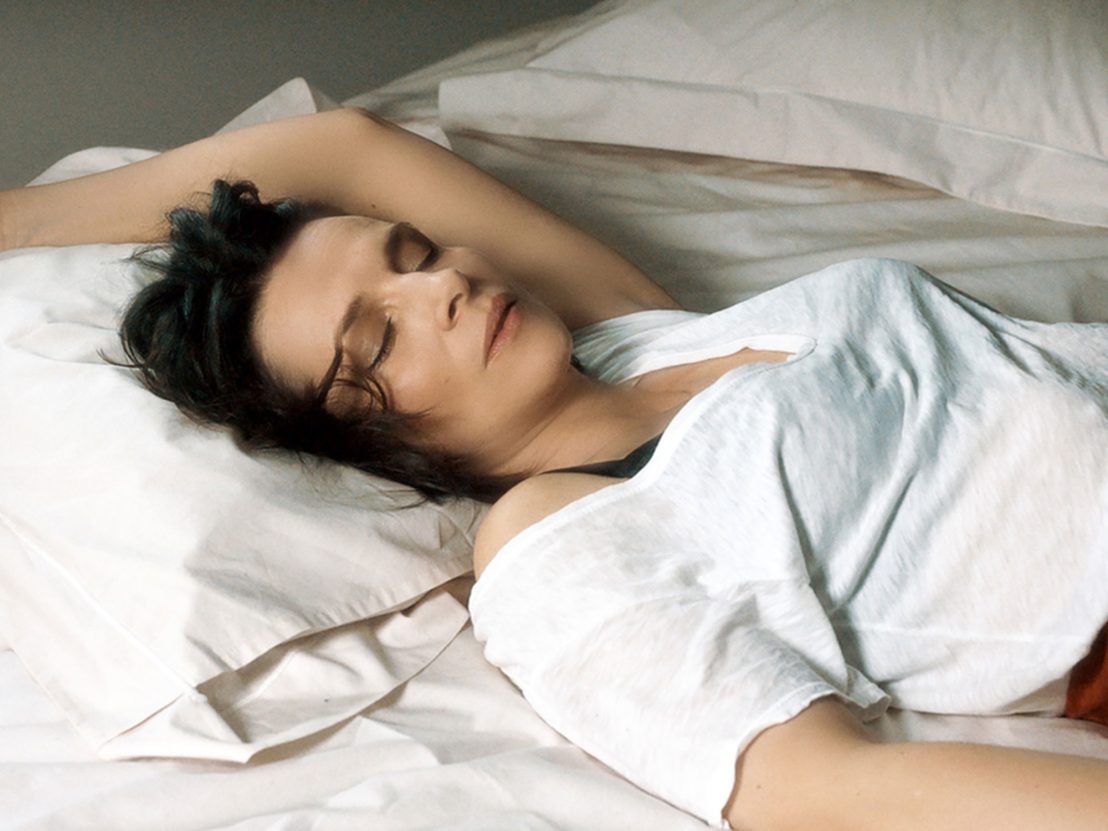 Juliette Binoche’s eyes are the window to the soul of Let The Sunshine In, the twelfth feature film by the French director Claire Denis. Specifically, it’s the way those eyes respond to the words flung at her from a carousel of male companions who appear before her character over the course of this surprise rom-com.

Matters begin with Binoche’s Isabelle lying naked beneath married banker Vincent (Xavier Beauvois), a sexually entitled bear-of-a-man. Later, without prompt, he tells Isabelle that he will never leave his wife for her, because although she is charming, his wife is extraordinary. Isabelle listens to his utterances, and those of many others, with contained absorption. Her liquid brown eyes gaze at her coterie of lovers or would-be paramours with a mysterious brew of vulnerability, scepticism and intrigue.

Conversations unfold with the unpredictable energy of spontaneous life. A recurring dynamic, spiced differently according to the partner, goes like this: he delivers an eccentric spiel hinting at hidden desires, issues and the size of his ego; there is a pause as Isabelle and the audience try to decode what has been said; then she answers in such a way that spins the conversation into a new dimension. Denis directs her actors to find the natural pulse of encounters. Each is made intimate by its specificity, and each made sensual by the possibility of romance.

The second man (of seven) is a foxy and self-involved theatre actor. Isabelle, an artist, is surprised when a meeting to discuss a project begins with him offloading a slew of loaded personal revelations while knocking back beers. Later, in his car outside her apartment, they have a passionately nonsensical debate about whether he should come up. Isabelle’s hand is glued to the car door handle. Even so, she can’t pull it. These two adults have the air of children unable to turn away from a new adventure. In Denis’ sophisticated hands, the done-to-death scenario of characters deciding whether to succumb to sexual magnetism has the chaotic integrity of life itself.

Let The Sunshine In checks in with Isabelle at a time when she is unusually free, having just separated from her adoring husband, François. (He crops up to be the butt of some tragicomic sexual feedback.) Loose from the leash of monogamy, Isabelle explores the intimate scenarios available to her with a gung-ho lack of discernment. Binoche is the gamest dame of French cinema and wears short skirts, cleavage skimming tops and permanent heels as if the chiselled cream of her beauty required the help of seductive clobber.

Co-written by French playwright and novelist Christine Angot (a friend Denis has collaborated with before), the script skewers manipulative men long before Isabelle notices anything other than the immediate heat of the moment. The most transparent example of deviousness is when Isabelle’s curator friend demeans her new working class lover, saying that she needs to be with someone from her own cultural milieu. It’s an ugly and complex scene that simmers with jealousy masquerading as concern.

There have been murmurings of incredulity that Claire Denis – maestro of politically resonant, atmospherically intense dramas – has turned around a chipper romantic farce at time when most were anticipating her Robert-Pattinson-in-space drama, High Life. Yes, the genre trappings are lighter this time, but Let The Sunshine In is far from a reinvention of her usual piercing art. Underlying the hi-jinx is a shrewdly observed depiction of the way goal-oriented sexual conquerors manipulate their more ingenuous mates. Denis, radical as ever, is too worldly to settle her tone around soapboxing over bitterness or disappointment.

This may be a film that wryly notes the wiles of male opportunists, but in its soul it is Isabelle’s film, and she is a profound character who only deepens with each painful ending.