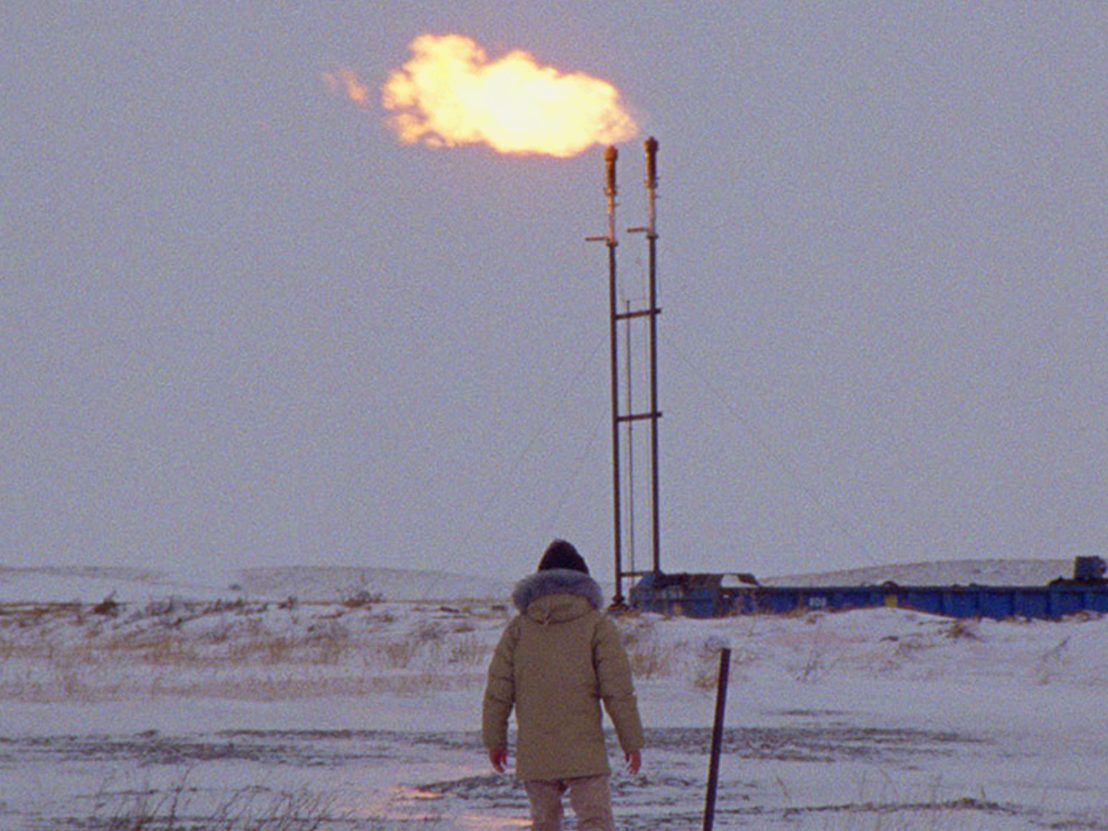 How to Blow Up a Pipeline – first-look review

This summer, The Guardian profiled the loose collective of young activists who, under cover of darkness, don masks, roam the streets of New York City’s wealthiest neighborhoods, and deflate the tires of SUVs, leaving a note on the windshield for the owners to find the next time they get behind the wheel: “Your gas guzzler kills.”

Director Daniel Goldhaber’s eco-terror thriller How to Blow Up a Pipeline channels the urgent fury, righteous impatience, confrontational attitude and pragmatic directness of the rising generation of climate activists, and opens with a similar act of vandalism. Hood up, Xochitl (Ariela Barer, who also cowrote the film) stalks the sidewalk, the camera following her in a slinky tracking shot set to Gavin Brivik’s pulsing score, before she kneels down alongside an extended-cab truck and pulls out a blade. (Goldhaber’s film, as evidenced by its title, is an escalation. The subjects of the Guardian profile jammed lentils into tires’ valves, rather than slashing them.) The choreography of this opening shot consciously echoes Bertrand Bonello’s sexy blackpilled teen-terrorism film Nocturama, but in contrast to Nocturama’s political remoteness and exhilarating nihilism, Goldhaber’s film is in direct discourse with an up-to-the-minute zeitgeist, and does not take it as a given that the levers of power are too remote for its characters to grasp.

The film takes place, predominantly, a few days before Christmas, a time of miracles and consumption and family stock-taking, somewhere in West Texas, where a rainbow coalition of would-be ecoteurs gather in an abandoned desert shack to build, plant, and detonate multiple bombs along an oil pipeline. In long shot, the wide-open vistas of the Permian Basin offer a fantasy of life free from surveillance-state paranoia, an unspoiled modern frontier in ironic echo of the conquered mythic West (a legacy to which Goldhaber nods in a Western-film tableau of his bombers gathered around a campfire).

Usually, film suspense setpieces hinge on defusing a bomb. Here, the opposite is rather the case, as the cohort assembles their matériel and head D.I.Y. bomb-maker Michael (Forrest Goodluck) mutters to himself over recipes cribbed from The Anarchist Cookbook. The film is quite granular about the process of assembling blast caps and placing charges, where to blow and how so there isn’t an oil spill, and the camera lingers suggestively on Michael’s crib sheet, which seems to indicate specific amounts and ratios of various volatile chemicals (in the end-credit crawl, “Anonymous” is credited as “Technical Advisor”). In classic heist-movie fashion, the outlaws ditch phones, arrange alibis, and improvise around unexpected snags in an elliptical editing scheme that alternately exposits and withholds key phases of the plan.

Making a fiction adaptation of a work of political theory by Andreas Malm (that you might want to Google in Incognito Mode) Goldhaber and editor Daniel Garber utilize a flashback structure to alternate between procedural and rhetorical modes, as the process-driven thrust of the present tense is interrupted by character thumbnails that zoom out onto the sociopolitical context (and also drop hints about who, if anyone, is a Fed). The main characters comprise a collage of modern demographic archetypes, each with their own skillset and political compass. Michael is Indigenous, and lives in North Dakota, where fracking flares light up the night sky; Dwayne (Jake Weary) is a dip-spitting Don’t Tread On Me good ole boy whose private property was seized via eminent domain to make way for the pipeline; Rowan (Kristine Froseth) and Logan (Lukas Gage) are Portlandia crusties, one with a trust fund and one without. The character flashbacks, presented one at a time in cliffhanger cutaways, touch on different aspects of the crisis: Xochitl’s mother’s death in a heat wave; Theo’s (Sasha Lane) cancer diagnosis, probably caused by industrial pollution; the campus meeting where Xochitl and Shawn (Marcus Scribner) get a lecture about incremental change. In bed later at night, Shawn doomscrolls through a mocked-up twitter feed; its fluent, bleeding-edge memespeak, and the way the characters argue with each other in half-true, half-frustrating talking points, are the clearest reminder that How to Blow Up a Pipeline comes from the director of 2018’s Cam, which did its own witty subcultural stenography in the form of a sex worker’s chat logs.

Goldhaber has populist storytelling instincts, demonstrated here by his use of Gage, especially, as comic relief, as well as by the very screenwriterly sense of character motivation and stakes. It seems inevitable, both dramatically and sociologically, that Theo’s Black girlfriend and reluctant coconspirator Alisha (Jayme Lawson), who volunteers with local organizations and accuses Theo of taking shortcuts in his activism and risking collateral damage, be the character most imperiled over the course of the plot. Giving characters like Theo and Xochitl personal involvement in the climate crisis, in the form of grief and trauma, risks being reductively psychological—but is also a useful reminder, amid debates about the ethics and efficacy of “peaceful” vs “violent” protests, of the violence that is already done every day by those profiting from catastrophic climate change.

A frequent complaint about the kids deflating SUV tires uptown—or cheering them on on Twitter—is that people performing radical politics are overcompensating for not doing the work in their day-to-day lives. A frankly rousing action movie, and an ultimately quite idealistic political screed, How to Blow Up a Pipeline seems primed to resonate with viewers who feel not just powerless to change the system, but powerless to even meaningfully change their own consumption patterns to live more ethically. This film won’t change the world, but it’s a romantic and hardly outrageous consideration of what it might mean to really try.

Tags: Daniel Goldhaber How to Blow Up a Pipeline Toronto Film Festival