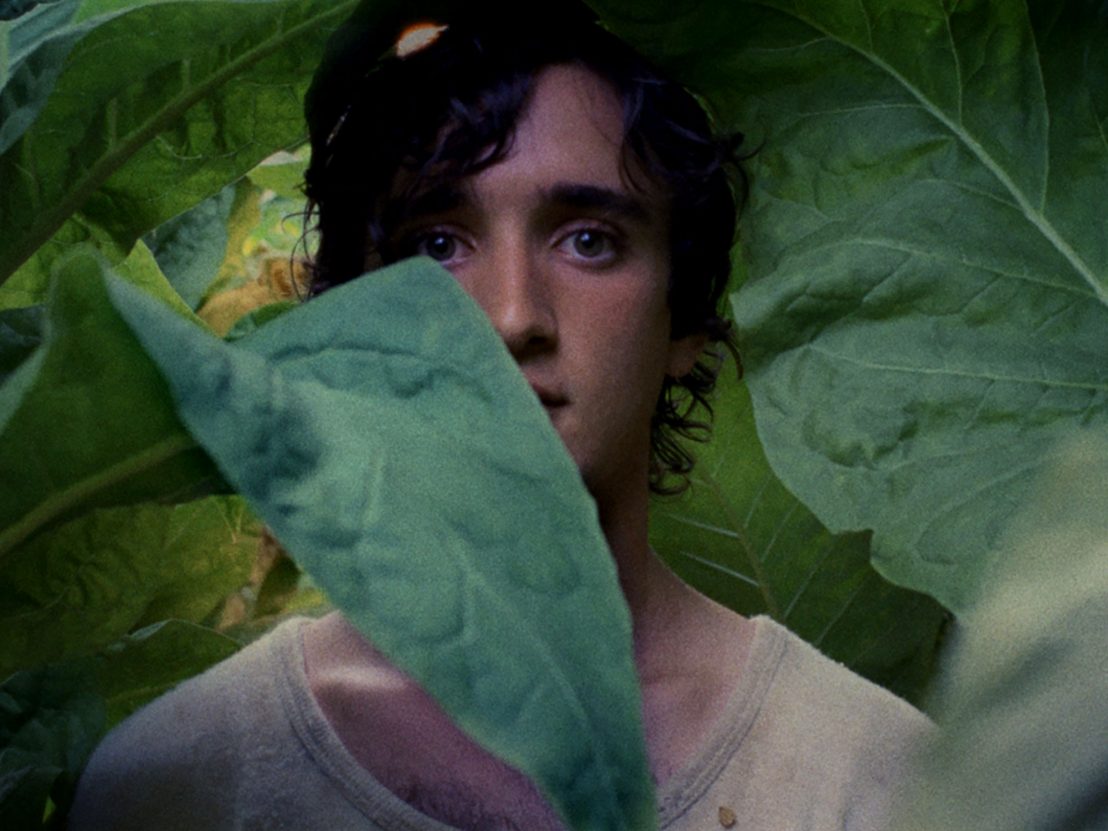 Happy as Lazzaro is best understood as a guided hallucination, or perhaps a moving photographic series contrasting a pastoral haven of peasants picturesquely performing their servitude with an urban hustle where those same folks wear jeans and commit low-level crime for a living. These two worlds conjured by Italian director Alice Rohrwacher in her follow-up to The Wonders are linked by the presence of a pure-hearted young man named Lazzaro (Adriano Tardiolo).

This is a film designed to frustrate narrative reads. For one: there are great crowds of characters, and most are not offered much of an introduction. The audience is positioned like someone drifting up late to a party in full swing, and slinking around the margins trying to find a handle on the atmosphere that so potently exudes itself. Instead of appealing to our rationale, Rohrwacher, aided by cinematographer Hélène Louvart, appeals to our sensuality. The corners of the frame are vignetted like old photographs, setting a tone of nostalgia for a fading world.

The figures in the frame are multiple generations of sharecroppers who are being exploited by the Marchesa Alfonsina De Luna. The setting is Inviolata, a rural Italian village in the 1980s, and unknown to her unpaid labourers, sharecropping has been outlawed. This social fact is presented casually, sans hysteria. Challenged by her peroxide-haired freewheeling son Tancredi, the Marchesa dismisses him with the explanation that everyone is exploiting someone, “It’s a chain reaction,” she says.

Meanwhile the sun traces a golden line around smooth faces, hair is healthy, eyes sparkle, and olive bodies capably tend to animals and the land. The idyllic vision is at odds with the situation. This half of the film has no interest in adding up – it simply unfolds. Then the second half is on us, heralded by helicopter shots over mountains and a voiceover about a wolf.

Happy as Lazzaro is among the most divisive films to have played so far in the official selection, because to even describe what it is or what it does is a confounding task. It’s a socially critical movie with no sense of urgency, it’s a magical world that is stuck on this earth. Alba Rohrwacher shines as Antonia, a character who comes into her own as a con artist with a sense of honour. Adriano Tardiolo as Lazzaro channels an untouchable see-no-evil, hear-no-evil, speak-no-evil type of innocence. There is a tiny dog in a neckcone, an antique cigarette holder, and back in Inviolate the most exquisite tableaux.

This is a film like a siren that beckons you towards it, only to evade your clutches. It is an ironclad mystery that unfolds in softly enveloping waves. Rohrwacher has made a Rorschach Test movie, that will hold any interpretation you care to throw at it.