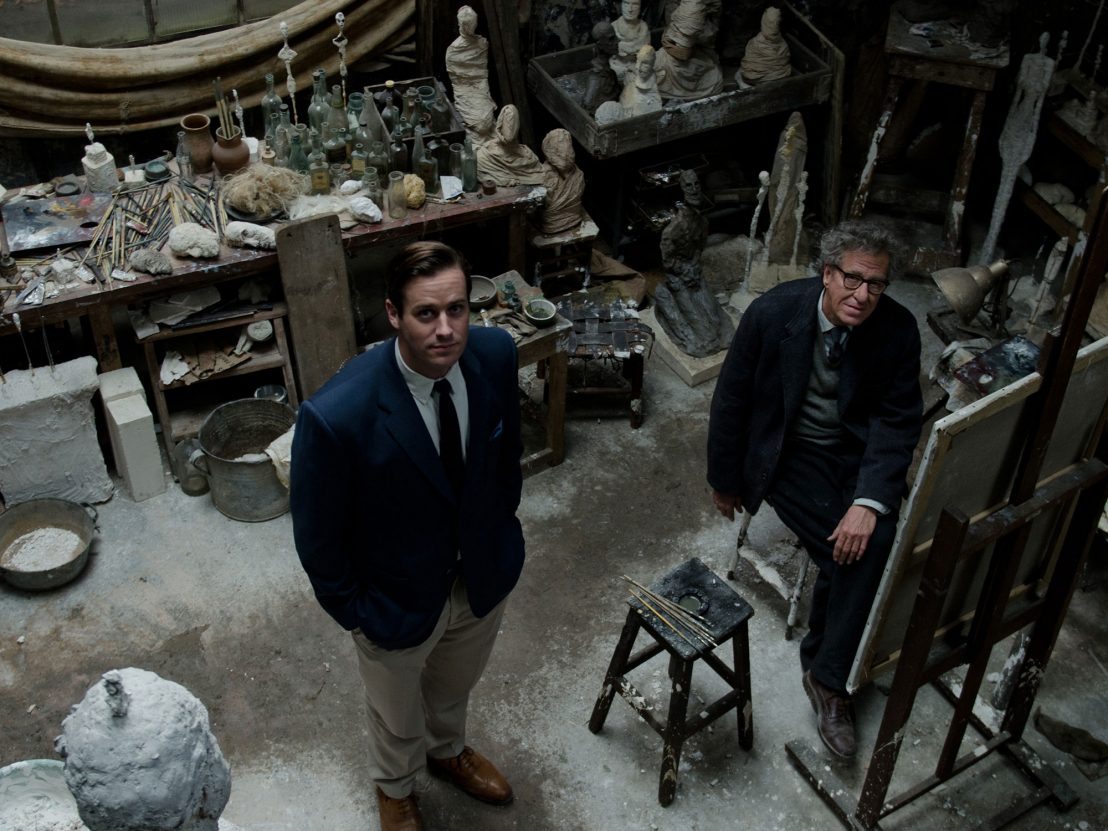 Your enjoyment of Final Portrait is, to a very palpable degree, going to depend just how much ‘Frenchness’ (with a capital F) you can handle in one film. There’s a roundelay of Gallic shrugs, Gauloises dangling from lips, perky Parisian prostitutes, artistic wig-outs, freeform marital arrangements and gallons of vin rouge.

Stanley Tucci’s slight but delightful sketch of artist Alberto Giacometti may occasionally over-egg the pudding, but the reigned-in performances by Geoffrey Rush, Armie Hammer and Tony Shalhoub (Clémence Poésy is another story…) and the director’s lightness of touch keep things from ever tipping over into oignon et baguette territory.

The ever-agreeable Hammer plays American art critic and biographer James Lord. Having gotten pally with Giacometti (Rush) during a sojourn in Paris, Lord accepts the great honour of sitting for a portrait before he jets back to New York. It should only take a few hours, he is assured – half a day at the most. But as soon as he takes his seat in Giacometti’s tumbledown studio, it becomes clear – to us, if not to Lord – that the artistic process is going to take more time, patience and energy than the writer bargained for.

Though revered and financially successful, Giacometti remains unconvinced of his talent. He rages at the canvas, begins the painting from scratch multiple times, comes and goes as his artistic whims will him. The diffident Lord takes it in his stride, with Hammer’s naturally monied, Ivy League self-possession not quite masking Lord’s vanity at sitting for the great man. He poses quietly as a series perfectly fine paintings are scrapped, while Giacometti asserts that no portrait is ever truly finished. The critic in Lord is satisfied with masterpieces, but Giacometti is searching for something unattainable. How long can this go on?

While hardly a masterpiece itself, Final Portrait is exceptionally warm company – it’s curt, focused and doesn’t get bogged down in artistic pretension. Rush plays Giacometti as a bit of an old ham, and the sly Hammer is always ready to give him enough rope, politely goading him into rants on Picasso (a thief) and Chagall (a housepainter) that are regularly deflated by the pithy interjections from his brother Diego (Shalhoub), who’s heard it all before. The result is a sweet, witty chamber piece that, unlike its subject, is a little too reserved to shoot for the moon.