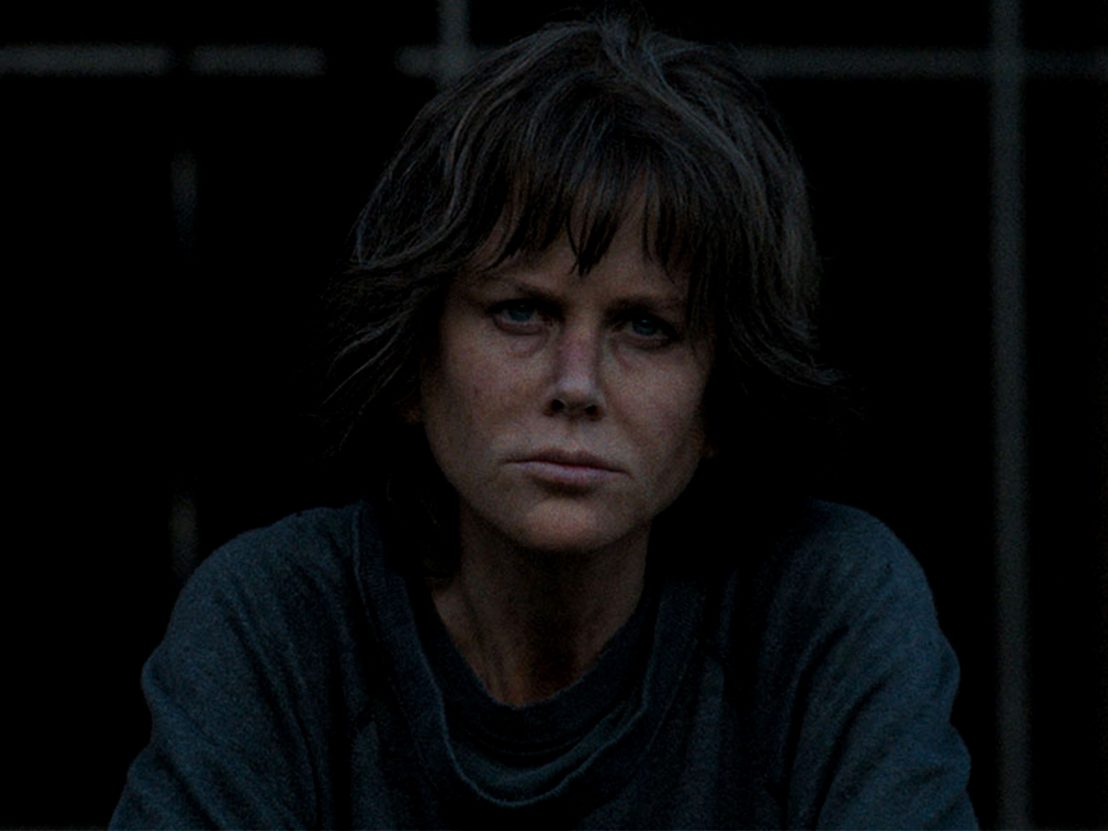 A committed Nicole Kidman slums it in this by-the-book detective noir from director Karyn Kusama.

Nicole Kidman is an unpredictable megawatt talent whose name when attached to a film instantly makes it a compelling proposition, especially when her role is the lead, as in Karyn Kusama’s detective noir Destroyer. Perhaps the kindest thing to say about Kidman’s performance as troubled LAPD enforcer Erin Bell is that it is a committed one.

In Carol Morley’s Out of Blue (which also premiered at this year’s TIFF) Patricia Clarkson essayed a controlled performance of a traumatised detective. Kidman goes in the other direction, dialling up reactions so as to glower, gurn, sneer, shout and (inexplicably) limp her way through the runtime.

Kidman once donned a false nose to play Virginia Woolf in The Hours – the closest she of the porcelain goddess stature came to doing a Charlize Theron in Monster. This transformation has now been eclipsed by Destroyer. Thanks to Bill Corso’s overzealous make-up design, she is aged via baggy, sallow skin which, coupled with her deranged performance and a long black coat lend her a walking dead vibe.

The film starts with the discovery of a dead body in a bleak, concrete, LA nowheresville. He is a John Doe (“no I.D, no idea” wisecracks an officer in what will prove to be the film’s high-watermark of wit). Three black circles are tattooed on the back of his neck. This means something to Bell and she snarls that she knows who did it in a special gruff voice Kidman is trying for the part. Bell is a trainwreck who drinks too much, sleeps in her car, and parents her 16-year-old daughter in maverick fashion which extends to trying to punch her boyfriend.

Life didn’t always look so bleak for Detective Erin Bell. Eighteen years back, she was a sparkly-eyed cop, who looked like Kidman the movie star, and had yet to develop the mysterious limp and deep voice of her future self. In the first of many incrementally revealing flashbacks, we see her and a handsome partner Chris (Sebastian Stan) preparing to go undercover in a gang.

It doesn’t take a genius to realise that something went so badly wrong on this undercover mission that Bell has never gotten over it. The gang-leader is played by Toby Kebbell. He is Silas, a cartoon villain whose idea of fun is forcing an underling to play Russian Roulette and booming with laughter at the outcome. Back in the present, Bell is searching for Silas by doing the rounds on people from her past, acquiring information through violence and on one occasion giving a hand job to a dying man as ceramic owls look on.

The main emotion Destroyer conjures is bafflement. It unfolds like a by-the-book crime film powered by broad-stokes characters with amoral dispositions. Yet it is also besieged by ridiculous flourishes presented in a po-faced fashion. To whit: Silas wears a wavy black wig, often photographed fluttering in the breeze, which he throws on a fire for an unspecified reason during a climactic moment; Bell persuades two officers to rush into a violent fray instead of waiting for back up by growling, “This is a gun fight”. The screenplay by Kusama’s regular collaborators, Phil Hay and Matt Manfredi, seems to have no awareness of its own absurdity, which makes it a departure from their last film together, 2015’s uncanny and absorbing cult thriller The Invitation.

The framework of Destroyer is too prescribed for its stranger aspects to scan as anything other than misfires. Bradley Whitford shows up to bring nasty relish to a crooked lawyer, but elsewhere the film is like a parody made without the director being in on the joke. It says something about how half-baked the rest of the film is that Kidman’s sublimely unconvincing portrayal of an officer of the law remains its chief charm.