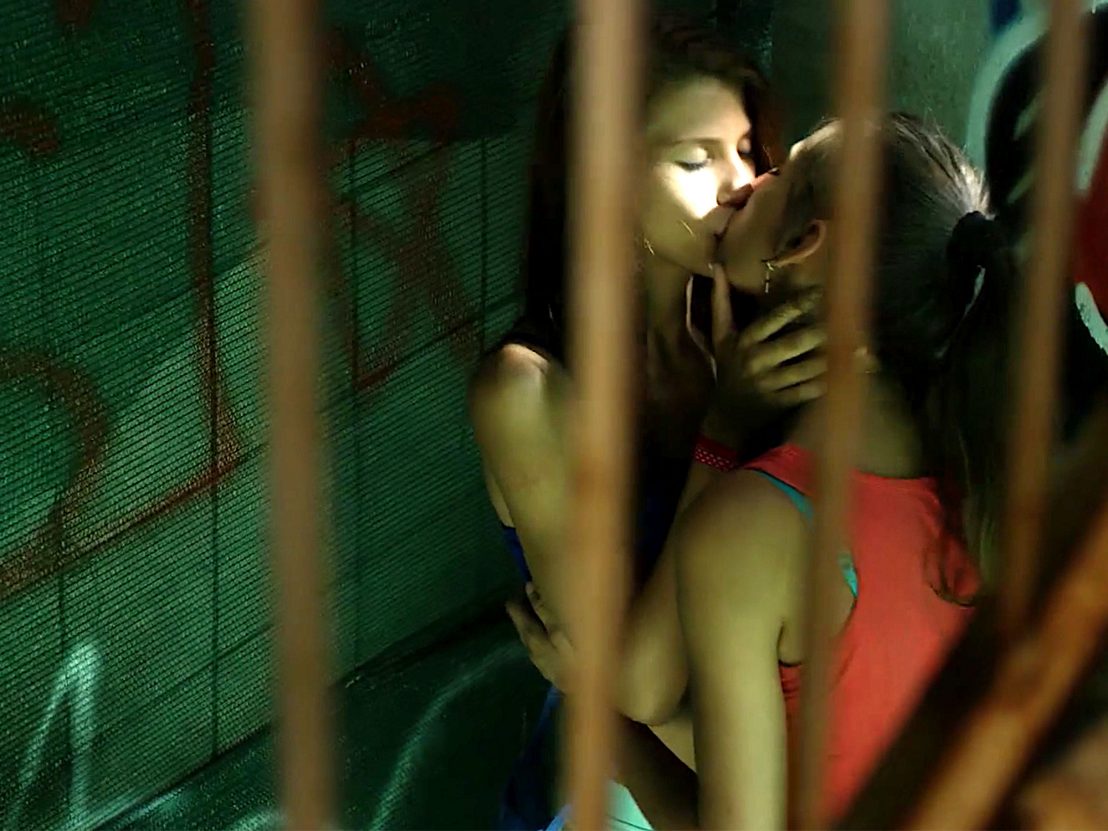 In Carmen and Lola, a young couple challenge the patriarchal and heteronormative attitudes of society.

As the men and women around them clap to a flamenco beat and sing repeatedly “he took her away, the prettiest thing in my home is to be wed,” two teenage girls dance closely together. One is ostentatiously adorned in a bejewelled, figure-hugging dress with a cut-out panel highlighting her toned stomach. She is Carmen, 17 and celebrating her engagement to Rafa, the cousin of her dancing partner, Lola.

Yet poised to threaten her engagement – and both girls’ futures in their Roma community – is the burgeoning attraction between them. While Carmen is less aware of this attraction in the moment, Lola, who privately identifies as a lesbian, is all too conscious of it. The clapping and singing fades out in favour of Nina Aranda’s melancholic score, as close-ups of the girls’ hands and faces convey the intimacy of their touch for a brief moment. Then Rafa returns to dance with Carmen, and the spell is shattered.

Among the film’s strengths is its documentary-like observation of everyday rituals within a Roma community on the the Madrid outskirts. Lola is the only non-“whitey” at her school. She dreams of exploring life outside of her community, getting an education and pursuing her interest in ornithology. Her father, Paco, wants her to work at his market stall, attend the local Evangelical church and find a Romani boy to marry.

Writer/director Arantxa Echevarría approaches the Roma way of life sensitively in her debut feature. One memorable scene in a hair salon highlights the belittlement and persecution this group faces from wider Spanish society. However the script does not hesitate to draw attention to the community’s hugely patriarchal and heteronormative attitudes. When Paco expresses concern about his daughter going out alone, Lola’s younger brother patronisingly promises to watch her. And when their mother lobbies for Lola’s freedom of movement, Paco threatens to hit her. You get the sense from their dialogue that these are common disputes in this family.

The performances, from a cast comprised almost entirely of non-professional actors plucked from the community itself, are raw and naturalistic . In particular Zaira Romero as Lola and Rosy Rodríguez as Carmen are entrancing in their commitment to both their characters and the story. As Echevarría herself has observed of the film, both girls took a huge risk in accepting these roles. “I had to talk with their parents. I wanted to explain that this film is going to be shown in cinemas, all [of their] community are going to see them, and maybe in the future they will not marry, or will have problems with [marrying].”

Echevarría’s inspiration for the film was a news article she read about the first lesbian wedding between two women from Spain’s Roma community. “It was scary because it was a picture of them from the back – you couldn’t see their faces – with fake names,” the director explains. “And the worst thing: no one from the family went to the wedding. So I thought ‘I would love to take this picture, see their faces, and think about their first love’.”

While eager to approach the story specifically as a tale of first love rather than forbidden love, Echevarría’s script nonetheless does not shy away from how the community regards homosexuality as taboo. Carmen’s own initial reaction upon discovering the nature of Lola’s feelings for her is cruel and derogatory – in line with the internalised homophobia that often manifests in queer members of conservative communities – but it’s not long before her intrigue and reciprocal attraction get the better of her.

The pair embark on a secret love affair, shown in tender stolen moments in the more hidden locations of their rundown neighbourhood. “You think that never again you’ll love this way,” Echevarría says of falling in love for the first time. “In that moment you can kill yourself, kill everybody, go to war – you’re so powerful, beautiful.”

Yet for such young women, the tragedy of their situation is that if they wish to love freely, they would have to leave their community, which – despite its heteropatriarchal constraints – is the only safety net they’ve ever had. Only those with the privilege of knowing they have a safe and viable future could think this choice is easy. For Carmen and Lola, to continue to love one another in the face of ostracisation and uncertainty is an act of rebellion and immense bravery.