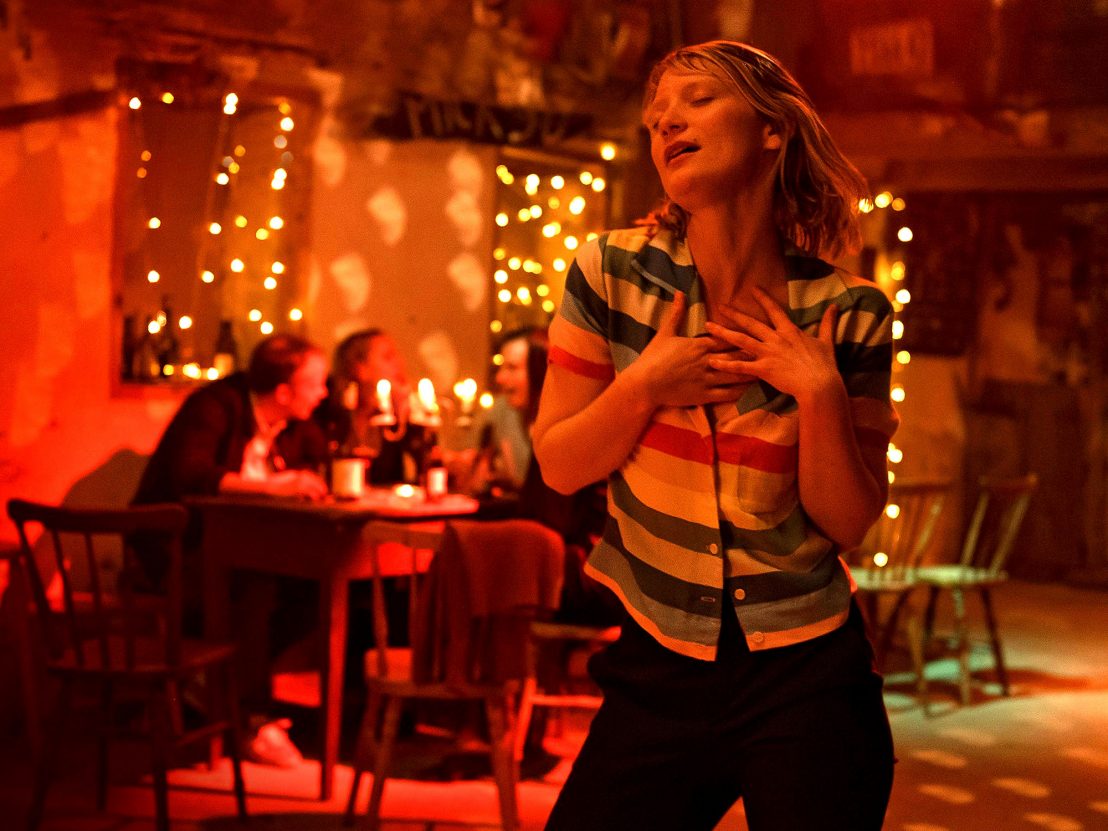 I flew to Paris in 2019 to interview the French filmmaker Mia Hansen-Løve about her autobiographical 2011 film, Goodbye First Love, which covers over a decade in the life of Camille (Lola Créton).

When the film opens she is a 15-year-old schoolgirl obsessively in love with her 19-year-old boyfriend Sullivan (Sebastian Urzendowsky). He loves her but is restless to leave Paris in order to travel around South America, and ends up breaking up with her by letter. Years pass. Camille becomes an architect. She enters a relationship with a very different type of man in his forties, who cherishes her. She cuts her hair short. She lives. Many years later, as if it was the most natural thing in the world, Sullivan returns. Their passion rekindles like dry wood meeting a naked flame. Bliss follows until Sullivan breaks up with her by letter again.

So, I watched the film looking for my answer, which took awhile to rise up out of its docu-realistic set-up. Chris (Vicky Krieps) and Tony (Tim Roth) are a filmmaker couple who travel to Fårö, the Swedish island where Ingmar Bergman lived and shot some of his most famous films: Persona, Through a Glass Darkly, Shame and Scenes From a Marriage. When we meet Chris and Tony they are on the plane that will lead them to a car, that will lead them to a boat, that will take them to Fårö where they are staying as artists in residence. Touches, like Tony giving Chris his sunglasses after she discovers hers are lost, show the tender bond that the couple share.

This bond is tested after they arrive on Bergman Island and are shown around their temporary home which, their host tells them, is where Bergman shot Scenes From a Marriage, a film responsible for “millions of divorces”. The tension introduced by this loaded setting is quickly born out as Chris and Tony are pulled in different directions: he towards public-facing duties at the Bergman Centre where he introduces his films, does panels and generally plays the role of visiting luminary; while she is free to go her own way, accepting an invitation from a young student, Hampus (Hampus Nordenson), to have a personal tour of the island, complete with swigs of local cider. The duo end up having a jellyfish fight in the summer sea in one ludicrously joyful scene.

I have visited Fårö, a serene yet bizarre place where there are more fields than people (population 505 at the time of my visit). Bergman’s ghost hangs over the island – a mildly oppressive presence that jars with the sparkling lakes and picturesque windmills that whizz past as you travel the roads by car or bike. There are rumours of Bergman’s ghost switching on lights. The landscape of the island is inextricably linked to his films, like the pebble beach surrounded by rugged rocks where Liv Ullmann and Bibi Andersson had it out in Persona. 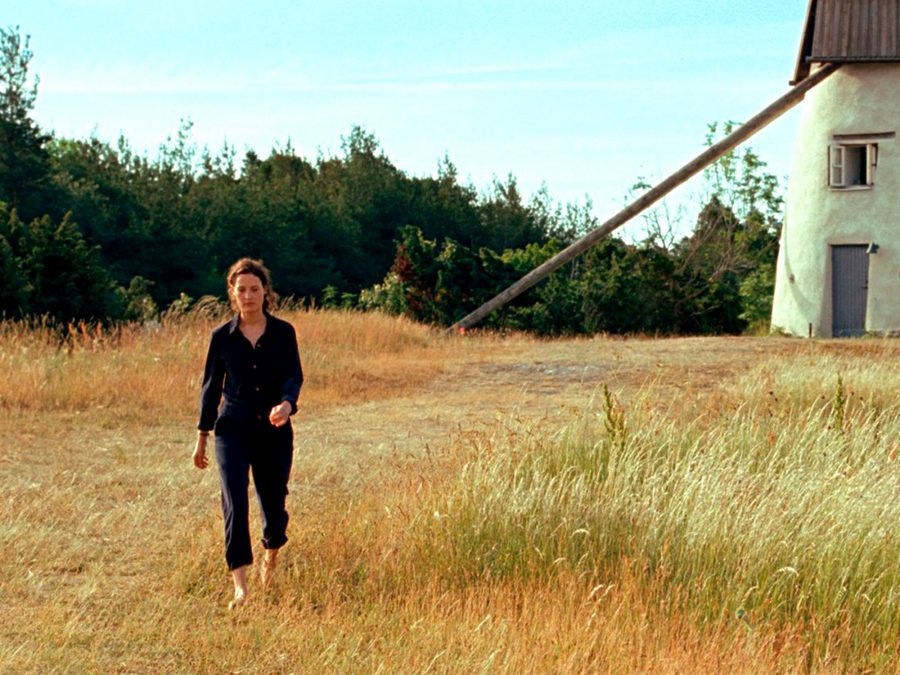 The film tussles with the discrepancy between the reverence afforded to Bergman’s status as an artist and his neglectful domestic conduct. (He had nine children from six women and was not interested in being a father.) This frustrates Chris who likes there to be “coherence” between film and filmmaker and she grills a relatively untroubled Tony. Hansen-Løve threads in an exploration of what it looks like to find meaning in films, and the complexity of our parasocial intimacy with filmmakers whose work moves us.

Krieps is sparky and elegant while Roth is earnest and humorous. Their relationship is presented without exposition. They express themselves bluntly, secure in each other’s maturity, even as notes of discord creep in. Adding to this is the fact that Tony’s scriptwriting is going swimmingly – and he is secretive about its contents – while Chris is stumped by how to end her script and wants to talk it through.

And so we come to the film-within-the-film, the emotional core of this movie and the answer I was seeking. As Chris narrates to Tony, her words come to life enacted by Mia Wasikowska and Anders Danielsen Lie. They are Amy and Joseph, estranged lovers thrown together for three days for a friend’s wedding happening in Fårö. Their backstory is lifted from the events of Goodbye First Love. It has been years since that timeline ended. Both are with new partners. Amy has a young daughter, just like Chris and just like Mia Hansen-Løve.

The way this section hit me was hopelessly personal. I watched the reunion of Amy/Camille/Mia and Joseph/Sullivan/Mr X imagining how I would navigate my own impossible love if we were locked into intimate proximity again. Wasikowska and Danielsen Lie deliver extraordinarily layered performances, channelling the familiarity of people who have already lived a major story together, along with the painful knowledge that this story is done. Yet their chemistry lingers. The closer they get – over dancing and a beach sauna and swimming – the less the hard-won knowledge counts and the more basic instincts take over.

Sexual heat is well-earned after the breezy incidental narrative of Chris and Tony which now takes on a new light and meaning. Bergman Island is to Goodbye First Love what Joanna Hogg’s The Souvenir Part II is to The Souvenir. Both first films were autobiographical odes to unrestrained passion, with all its attendant hurt, while both sequels ring the progression as female filmmakers step into their work, instead over an emotional precipice.

Another question I asked Mia Hansen-Løve in 2019: “Do you think you’re safe from impossible love now?” She answered: “Ha, I don’t know about that! You do change and that’s good because if life was just a repetition of the same thing over and over it would be either boring or make you crazy. I’m not the kind of person who would say definitive things about my future or my feelings. Nobody is really ever. Well, maybe some people are, but I don’t think I will ever be protected against suffering or feeling – and I don’t want to be. But at least I wouldn’t react exactly the same way now, or go into the same dead end.”

At a certain point, Chris worries that she is telling the same story over and over again. Tony says the story may stay the same but her perspective in the telling of it changes. The answer I took in the end is that this is a communication with her Sullivan, but it’s also a communication with cinema history and people like me.

In my favourite scene, Amy dances to ‘The Winner Takes It All’ by Swedish icons ABBA. She dances with a friend but she is dancing for Joseph who she knows is watching. High on the pleasure of moving her body, the uptempo music and the heat of his gaze, the mood is ecstatic until she looks back to the place where he was standing by the bar. The camera cuts to an empty space. Pleasure drains out of the mood. This is exactly how it feels to love someone who doesn’t love you in the right way. I needed to be reminded of that. 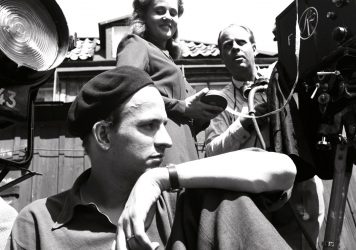