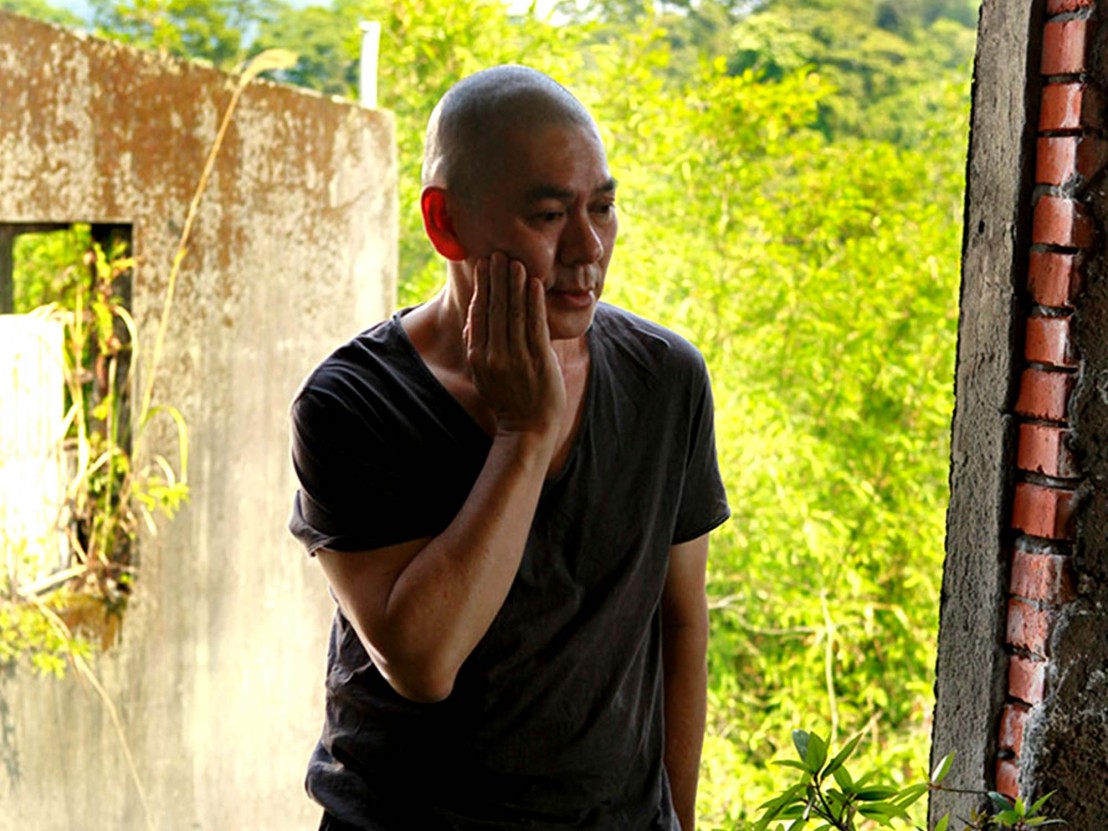 Akin to laying stranded on a paradise island and allowing the warm waves to lap at your toes, Tsai Ming-Liang’s blissful Afternoon is a film which explores death and loneliness in the most serene and poetic way imaginable.

It takes place in a dilapidated room within his own remote house which sits on the side of a mountain, as the director selects a picturesque nook in which to have an extended conversation with his long-time collaborator and leading man, Lee Kang-Sheng. The pair slouch low in leather chairs – colour coordinated to work with the greens of the rural backdrop – and sip water and tea, with Lee chain-smoking on white-tipped cigarettes – a signifier of who dominates the conversation.

Both are sat in front of a wall with an opening which faces out to the surrounding jungle, each with their own far-off horizon in the backdrop. There’s a moment where Tsai picks his toe. And then later he brushes a fly from Lee’s arm. Sometimes, a man’s tartan flat-cap enters into the corner of the frame. This formal inactivity helps to parlay the focus on to these minor details, and works well when juxtaposed with the thematic gravity of the discussion which begins and ends on the subject of mortality.

Yet this is not a depressing film – it’s a joyous ode to a very special kind of working relationship, one that its participants find it almost impossible to define. We learn that Tsai has reached a point in his career where death anxiety consumes his professional life, and this possibly stems from the extreme protectiveness he feels for Lee. It seems unlikely he’ll make another film, but if he does, Lee will be in it and it will, by natural extension, be about him. Their relationship transcends love – the pair live together in this house, Tsai cooking and painting, Lee tending to the garden (internet bloggers are starting to refer to him as a “potato farmer” now) and walking his dogs. Lee doesn’t star in Tsai’s films, Tsai’s films are windows onto Lee’s distinctive process.

What’s initially interesting is that a writer/director who makes films with very little dialogue is himself so relentlessly garrulous. He’s weeping and laughing within the first five minutes. Indeed, there are points that this feels more like an extended therapy session, with Tsai employing Lee as a human wailing wall while he sits, silent, contented, expressionless, as the words flow out of his conflicted master. It’s interesting, though, that both men remain psychologically simpatico, neither goading or searching for acceptance from the other.

Tsai, however, comes across as being far more sensitive to criticism and values his creative independence above all else. Though their relationship has reach a point which transcends conventional norms, Afternoon depicts the men as very different to one another, and there’s no sense that Tsai has moulded Lee into an intellectual plaything or a model for him to manipulate. He loves him for exactly who he is.

From it’s opening gambit of Tsai admitting that he feels like he’s about to die, the film is instantly contextualised as a last will and testament, and that it never slips into maudlin introspection is emblematic of the pair’s hushed perspicacity and the admission that they’ve both feel amply contented their lives thus far. At one point the conversation strays onto the question of whether they plan to meet in their next lives, to which Lee wryly ponders whether he could be the director this time.

Though primarily an attempt to define a relationship (the film is centrally about the impossibility of this task), Afternoon functions also as a brilliant film about working as a director, working as an actor, and how those two worlds converge. It places Tsai’s 2013 film Stray Dogs in a new light, with the pair going into intense detail on how they created the sequence where Lee ravages an entire cabbage.

Later, when we hear of the hardships of making this kind of cinema – Tsai and Lee have long had to physically sell tickets on the street for their movies in order to coax people inside – Stray Dogs’ exploration into the indignity of poverty is suddenly reframed as a film about moviemaking.