Wonder Woman’s appearance in Zack Snyder’s Batman v Superman: Dawn of Justice may have been more fleeting than hoped, but there was an upside to its brevity – it left plenty of her backstory open to explore. Sure enough, DC has dropped a new trailer for her upcoming solo feature that covers her origins in more detail. As readers of the comics will know, it’s pretty badass.

Amid the lush mountains of Themyscira, an Amazonian island nation populated only by women, the young Princess Diana sets her sights on a sword that “only the fiercest” warrior is able to wield. Cue a combat training montage with her aunt Antiope (Robin Wright), which ends with Diana learning how to unleash the power of her wristwear, the awesomely named Bracelets of Submission.

From there, Diana travels to London with an American intelligence officer (Chris Pine) in order to end World War One. The setup promises to be a natural source of fish-out-of-water humour and societal observation, as Wonder Woman adapts to the industrial setting and her status within it.

The film itself is shaping up to be a crowd-pleaser that retains a keen eye on the superhero movies of the past. Director Patty Jenkins (best known for making Charlize Theron into a serial killer in 2003’s Monster) has given Richard Donner’s original Superman as a primary inspiration, along with Indiana Jones and – somewhat more surprisingly – Casablanca.

We’re not sure what to expect from that trio of influences, but this latest trailer has certainly whet our appetite. This has the potential to be an origin story we can get behind. 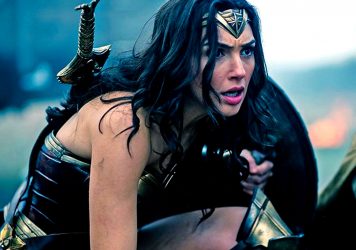 The first trailer for Wonder Woman is here