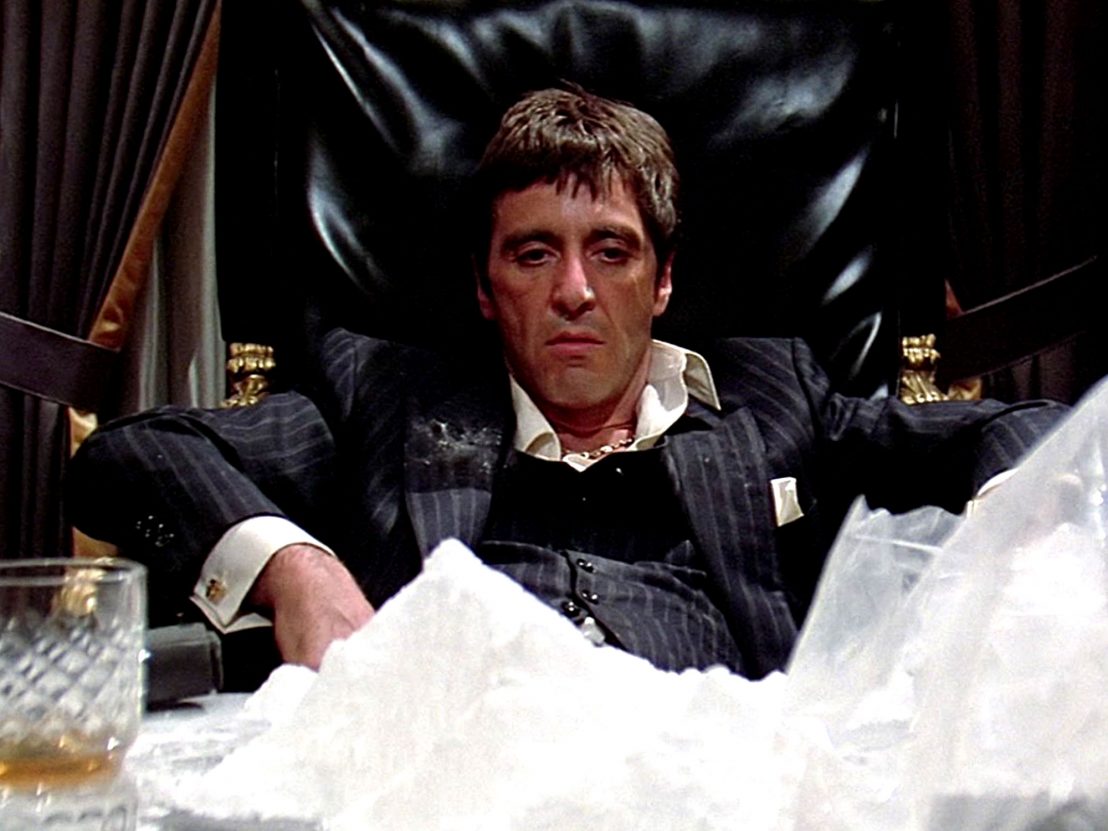 A decade before the Nixon Administration popularised the term “War on Drugs”, the emerging counterculture movement saw more recreational drug use in the United States than ever before. One film that best reflects this is Easy Rider, which centres around two bikers who, after smuggling cocaine across the border and receiving a large sum for it, decide to ride across the country to New Orleans. Peter Fonda and Dennis Hopper became counterculture icons for their portrayal of two free spirits in a film that remains synonymous with nonconformism and drug use.

Easy Rider’s potent anti-establishment message meant that it did not go down so well with everyone, with Vice President Spiro Agnew criticising the film for “playing right into the hands of the drug culture”. This level of disapproval from those in power was a sign of things to come. As Jack Nicholson’s George says in the film, “But they see a free individual, it’s gonna scare ’em.”

Two years after the release of Easy Rider, the so-called War on Drugs officially began, with President Nixon declaring substance abuse “public enemy number one”. Enforcement was stepped up, as was the punishment for those found guilty of taking drugs, while nationwide advertising campaigns such as ‘Just Say No’ sought to discourage children from engaging in recreational substance abuse. With this change, drug users were not seen just as rebellious, free-thinking youths by society, but as outright criminals.

Heroin addiction in particular became a hot-button issue, as depicted in Jerry Schatzberg’s 1971 flm The Panic in Needle Park. It portrays a group of heroin addicts living in New York City, specifically focusing on the downfall of a young woman’s life after she is introduced to the drug and becomes an addict herself. Unlike Easy Rider, it presents drug addiction as highly dangerous and illicit. Throughout the film, Bobby (Al Pacino), a dealer and user, is shown to have been in trouble with the law many times, and ends up being arrested and imprisoned. This harrowing drama reflected the harder stance society was beginning to take.

The inauguration of Ronald Reagan in 1981 marked a new chapter in the War on Drugs, as the President expanded the government’s combative measures like never before. Throughout the 1980s, almost $2bn was allocated to the effort, with the number of incarcerations reaching an all-time high. The public fear of the perceived drug problem was also higher than ever before, with many concerned about overseas influences. Miami in particular gained a reputation as the drug capital of the world, with many supposedly migrating from Latin America to become drug lords there.

Released in 1983, Brian De Palma’s Scarface held a cocaine-smeared mirror to society at the time. The film’s protagonist, Tony Montana (Al Pacino), starts out as a Cuban migrant working as a lowly dishwasher, but, through smuggling and dealing cocaine, he becomes a powerful and violent drug kingpin. As well as Cuban, the film also depicts Bolivian and Colombian drug cartels in Miami, with many of the fictional supporting characters based on real members, emphasising the plight of the city’s officials at the time.

The 1990s saw the US government become more aggressive, often unethically so, in its bid to win the War. At the same time, perhaps due to this, public empathy grew for those in the drug business, as the approval rating for the War plummeted. The first half of the decade also marked the peak of Pablo Escobar and the Colombian drug cartel’s powers. 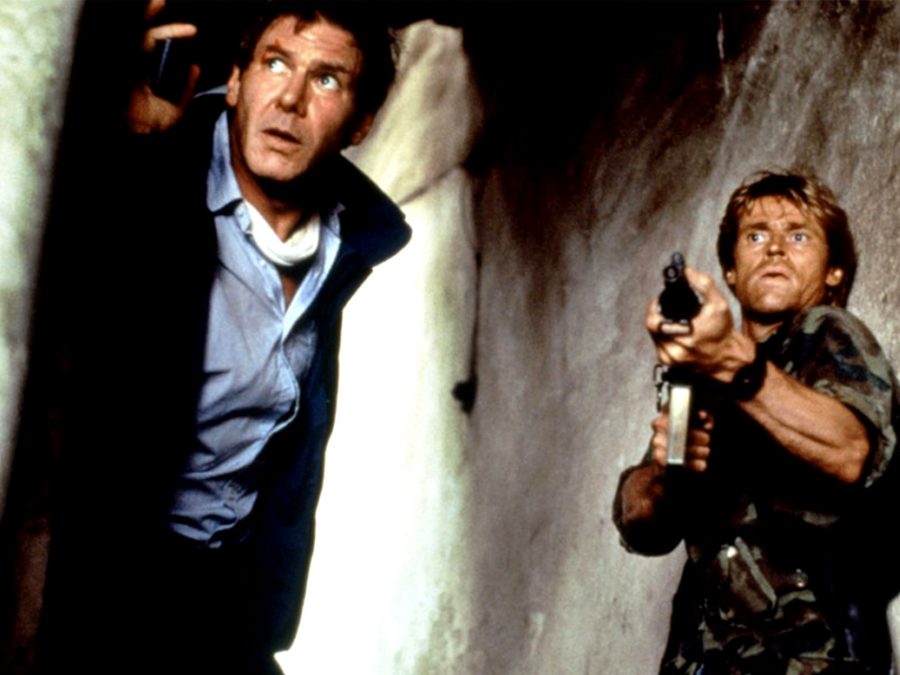 Clear and Present Danger explores both of these issues. In the film, Harrison Ford’s Jack Ryan is appointed CIA Acting Deputy Director and asked to oversee operations in Colombia. However, he soon discovers that the CIA are keeping him in the dark over their covert war against a drug cartel. Eventually it is revealed that the CIA wants to strike a deal, with the cartel agreeing to reduce drug shipments to the US in order to make it look like the drug war is being won. In return, the CIA promises to cease all operations in Colombia, a plot point which reflects the sheer desperation of the US government at the time to finally make the War seem a success for themselves.

Since the start of the 21st century, the common consensus has been that this is a war that can never be won and should no longer be fought. In Denis Villeneuve’s 2015 thriller, Sicario, the War on Drugs is presented as a lawless conflict as opposed to a righteous battle between good and evil. In the film, Emily Blunt plays a straight-laced FBI agent who joins a special unit tasked with apprehending a Mexican drug cartel. Also in her team are Matt (Josh Brolin) and Alejandro (Benicio Del Toro), two agents with comparatively ambiguous morals.

As the story unfolds, it becomes clear that they have lost all hope of winning the War and are instead simply attempting to restore some order to the drug business, rather than shut it down completely, by having one cartel control the entire drug trade in Mexico. As Brolin’s Matt Graver puts it, “Until somebody finds a way to convince 20 per cent of the population to stop snorting and smoking that shit, order’s the best we can hope for.”

The film’s sequel, Sicario 2: Soldado, carries on in much the same cynical yet pragmatic vein. With the War on Drugs seemingly never-ending, it will be interesting to see how Hollywood continues to portray this complex issue in the years and decades ahead. Just what sort of war they’ll be portraying is anybody’s guess. As Del Toro says in the first Sicario film, “You’re asking me how a watch works. For now we’ll just keep an eye on the time.” 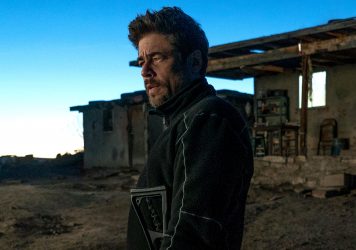 Benicio Del Toro is at his formidable best in this deeply cynical and scattershot cartel saga sequel. 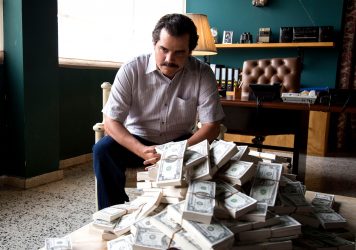 Why are we all so fascinated by the story of this notorious cartel boss?