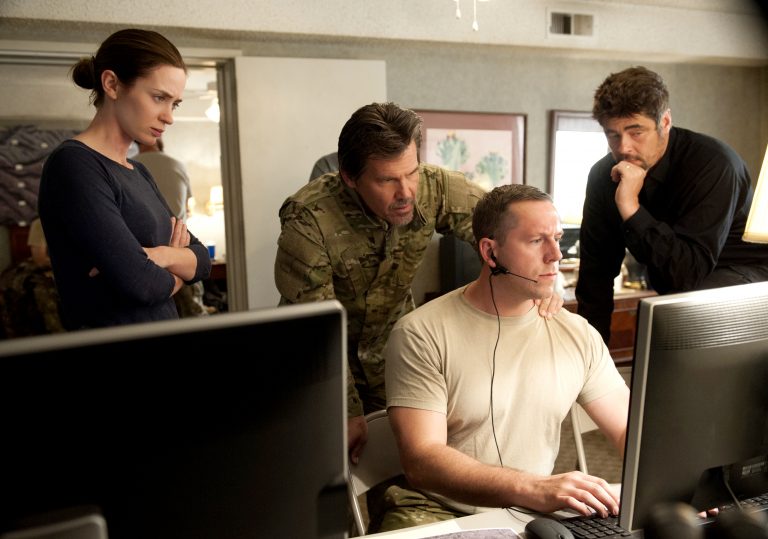 A heady shot of technical pyrotechnics, a triumph of aesthetics over politics.

A visceral, in-the-moment ride-along more than a movie to chew over for any length of time.

Prisoners, Denis Villeneuve’s first collaboration with the great DoP Roger Deakins, showed the Quebecois director could elicit sinister portent from just about any scenario without demonstrating any judgment about whether it was worth filming in the first place.

Sicario, which reteams Villeneuve and Deakins, benefits immensely from not sliding into snakes-and-Satanists silliness, and is accordingly excruciatingly suspenseful for most of its running time. As recently depicted in Gerardo Naranjo’s Miss Bala, Amat Escalante’s Heli and Matthew Heineman’s Cartel Land, the disastrous War on Drugs is understood primarily as a never-ending series of atrocities, most committed by implacably brutal Mexican cartels.

What this presentation – with its emphasis on bodies hanging from bridges, borderland shootouts and other routine eruptions of extreme violence – leaves out is any kind of question as to why this is happening in the first place. It’s not as widely understood as it should be that the unwinnable war on drugs is a terrifically effective way of enriching America’s private prisons, but not good for much else; a film on the drug wars that shies away from any larger examination of the monstrous system behind it is a rather pointless thing.

Sicario doesn’t have much to contribute to political dialogue besides the sentiment, ʻYou probably shouldn’t trust anyone in the CIA,ʼ which should already be staggeringly obvious. This large ideological caveat aside, the film is relentlessly effective at keeping viewer nerves frayed; the ominous slow dollies, zooms, close-ups and other acts of directorial aggression slathered over Prisoners work much better with halfway credible material. The setup is very simple: FBI agent Kate (Emily Blunt) is recruited to join the ambiguously credentialed government agent Matt (Josh Brolin) in a raid on a major drug lord. What is presented as a simple action predictably leads to darker covert ops of dubious legality, offsite torture and all. Essentially a passive character, Kate acts as a viewer surrogate: the only choice she’s given is to remove herself from the situation, but she’s too curious to tear herself away.

With expert support from Brolin and a fully-engaged Benicio Del Toro as another mysteriously credentialed man, Sicario maintains a strong sense of menace in the unlikeliest settings: even a simple shot of Blunt taking a shower alone in her apartment conjures a slasher movieʼs worth of pent-up dread. A shoot-out in the crowded lanes at the border crossing makes expert use of changing traffic between protagonists and potential threat, the moving cars constantly resetting where gunfire might come from to ratchet the tension.

A heady shot of technical pyrotechnics, a triumph of aesthetics over politics.

A visceral, in-the-moment ride-along more than a movie to chew over for any length of time.