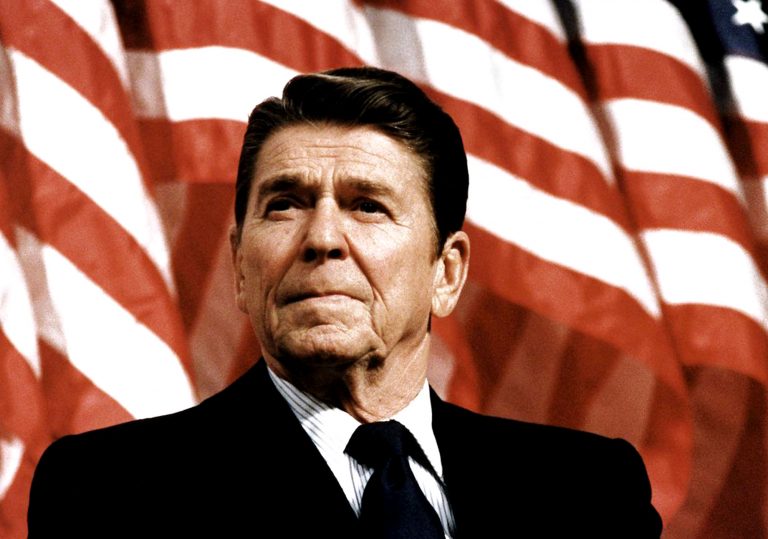 American politics and fear of human extinction is so hot right now.

Nice little montage of news footage which allows the images to do the talking.

Some interesting insights, but nothing a cursory scan through Wikipedia would't offer.

Even from beyond the grave, a hoary gaggle of history’s most vile tyrants are likely looking at the current political situation in America and chuckling to themselves as, day by day, their reputations are, if not salvaged, then at least softened. Though Ronald Reagan might be earmarked as the guy who blazed a trail for light entertainers wanting to enter high office, what this new documentary suggests is that he at least played the part of ‘Leader of the Free World #40’. Even if it wasn’t quite and award-worthy turn.

His Hollywood bona fides served to enhance his personality and made the “Gipper” appear as a wipe-clean scion of flinty, oil-slicked affability, even if some believed that he didn’t really have the bus fare up top to be wrangling with the duplicitous pinkos of the Evil Empire. The image he portrayed was one of extended family stability, and his was a watch where PR fire fights occurred before any sparks had started to fly. Pacho Velez and Sierra Pettengill’s film suggests that Reagan oversaw the first media presidency, where television became not only a tool for mass communication, but a way to build a rocksteady persona for those voters who perhaps didn’t pore over the pages of the daily broadsheets.

Comprised entirely of TV camera and news footage ranging across his entire presidency, the film doesn’t employ talking heads and there are only a few captions to guide the way. There’s no contemporary commentary on top of the images. Instead, political wags from the day analyse the meetings, addresses and speeches and offer hints that, even then, most saw through the White House’s “everything is fine” tactics.

Interestingly, the latter years of the Cold War became key to Reagan’s time in office, and its ironic to see the reserved, constantly on-script commander in chief delivering behind-the-scenes barbs at the expense of his Communist soon-to-be-almost-allies. He chides them for state-sponsored manipulation of truth, while he indulges in exactly the same tactic on home turf.

The Reagan Show pretty much gives away its entire thesis in its title, but it’s fun to trawl through these archive images and it allows us to ponder whether we’ll ever really be able to claw through the protective layers of spin. Plus, the film depicts an an era where empty provocation and nuclear brinksmanship took the world to the edge – it was the years of reparations afterwards which sealed Reagan’s image as some kind of homespun saviour of humanity. You have to threaten humanity to reap the benefit of saving it.

American politics and fear of human extinction is so hot right now.

Nice little montage of news footage which allows the images to do the talking.

Some interesting insights, but nothing a cursory scan through Wikipedia would't offer.