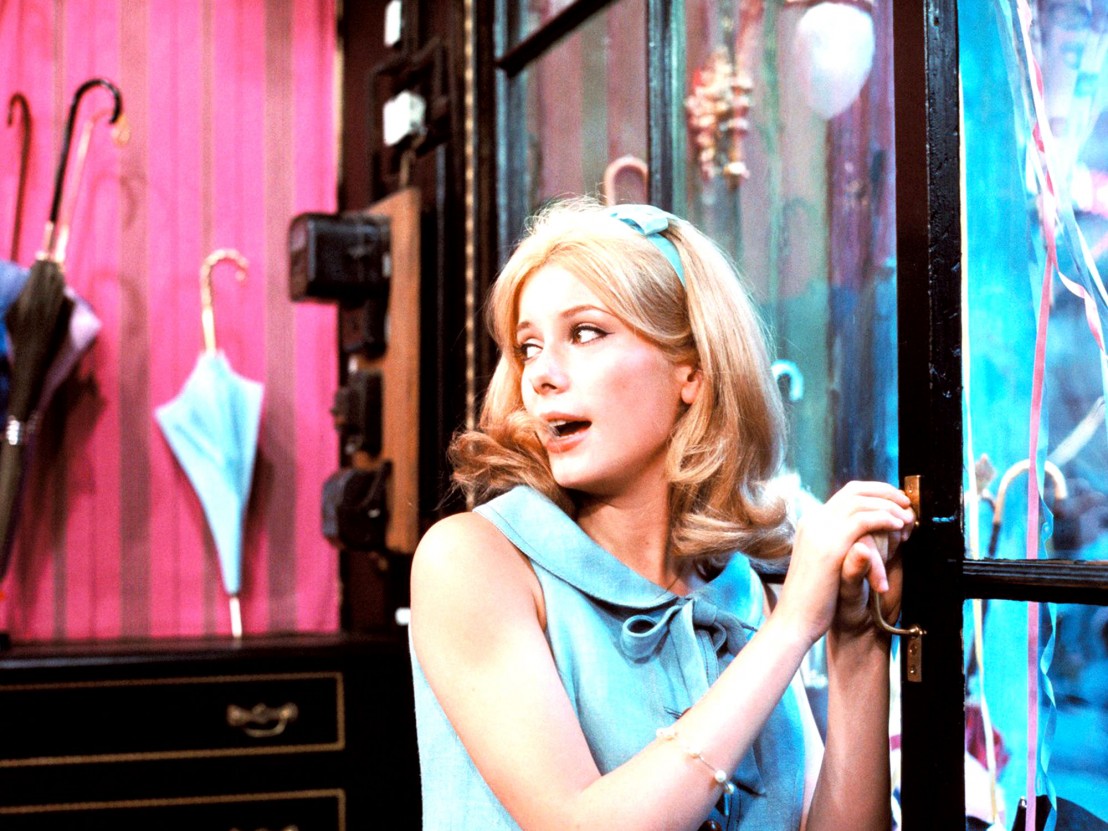 From its use of bright primary colours, to its whimsical tone and briefly glimpsed dance set-pieces, the first trailer for La La Land suggests that director Damien Chazelle has been gorging on MGM musicals. Yet the film it most evokes is not from classic era Hollywood – in fact, it’s not even American. Rather, the trailer seems to channel Jacques Demy’s social realist operetta from 1964, The Umbrellas of Cherbourg.

One of the key figures of the “Left Bank” group of filmmakers who worked and existed concurrently with the “young Turks” of the French New Wave, Demy’s film is a flamboyant,  colourful musical set in the coastal town of Cherbourg, and stars Catherine Deneuve and Nino Castelnuovo as star-crossed lovers Genevieve and Guy whose affair abruptly comes to a close when he is drafted to fight in the Algerian war. What it’s known for is the fact that the all the dialogue – no matter how mundane – is sung rather than spoken, all set to Michel Legrand’s magnificent and iconic score.

Itself influenced by Hollywood’s golden age of technicolour musicals, it’s easy to see how the similarities with this film and the trailer for La La Land might stem for a shared common source. But Chazelle has explicitly singled out The Umbrellas of Cherbourg as an influence, and, based on the trailer, there is one key aspect that sets it and Demy’s film apart from classic Hollywood song and dance films – its tone, set by the pensive song performed by Gosling that plays over it.

The anxious, longing lyrics could easily be describing the feelings of Guy, the lowly mechanic whose dreams of marrying his lover are thwarted when he’s sent off to war: ‘Who knows? Is this the start of something wonderful / or just another dream I cannot make true?’ The melody is similarly downbeat with an air of melancholy hanging over it, bearing a passing resemblance to ‘I Will Wait For You’, the impassioned central theme from The Umbrellas of Cherbourg. It’s certainly not a song to which you can perform a merry tap dance, inferring that La La Land will not be just a well-choreographed piece of light hearted escapism.

‘I Will Wait For You’ marks a moment of searing devastation in Demy’s film. As Guy boards the train, off to fulfil his military duty, the camera tracks back at the same pace as the train, adopting his point of view as the figure of his beloved Genevieve becomes smaller and smaller, before finally almost disappearing into the background. It’s an inspired take on the railway station farewell set-up. It demonstrates all the chutzpah of a classic Hollywood musical and all the weepy romance of a classic Hollywood melodrama.

The way in which Demy evolves MGM’s extraordinary style is infused with some of the more pessimistic realities of ordinary, working class life. This is what makes The Umbrellas of Cherbourg such a profound cinematic experience. Though we experience the film through stylish shots like this, and the vision of a romantically heightened world where everybody sings and even the dingiest streets emit a glow of rich, shimmering colour, the actual content of the plot is grounded in the pragmatic compromises of real life.

While Guy is away, Catherine loses heart due to his lack of correspondence and, pregnant with his child, reluctantly decides to marry another suitor. There is no melodramatic romantic reunion and Hollywood happily-ever-after ending between the tragic lovers – he, too, later settles down with a middle-class woman and starts a family of his own. The former lovers’ blissful romance is thus diminished to just a nostalgic shared memory.

Given all this, as well as how his previous film Whiplash defied obvious generic classification and a clear overriding moral message, here’s hope that Chazelle’s La La Land shows similar emotional complexity rather than being a more technically cold musical pastiche.