Discover the sly social critique of this Reagan-era teen thriller 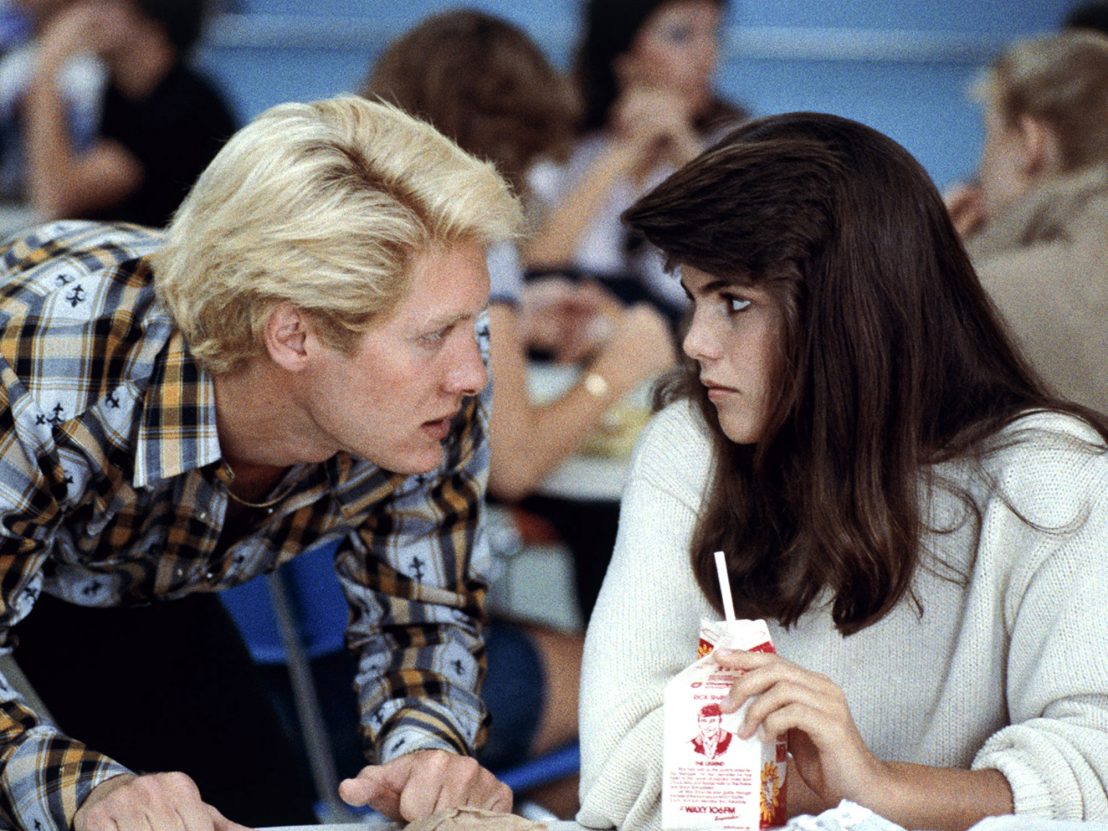 “You’re gonna make it, kids. You’ve gotta be strong.” This is Colonel “Mac” MacWilliams in the opening sequence of The New Kids, giving his teenaged children Loren (Shannon Presby) and Abby (Lori Loughlin) a pep talk about life after having woken them at the crack of dawn and taken them outside for a gruelling outdoor fitness routine/combat training.

These adolescents have been lovingly reared by Mac to be tough, resourceful and self-reliant members of society. After his pep talk is over, all three will recite together, “It’s a jungle out there”, an expression which shows that Mac has brought his extensive experience as a Special Forces commander back home with him from his multiple tours in the more literal jungles of Vietnam.

Even as a television news report tells us of Mac’s 75 missions against terrorism, and of the special commendation that he is receiving from the President for having “single-handedly subdued five plane hijackers on a Boeing 747”, the call comes in that this American hero and his wife have just been killed in a car accident. Now orphaned, Loren and Abby move to Glenby, Florida to live with their uncle Charlie (Eddie Jones) and his wife Fay (Lucy Martin), who run a gas station and run-down amusement park that Charlie has purchased with the last of his life’s savings.

Smart, hard-working and good-natured, the two teens will make the best of their new circumstances. But Loren finds himself drawn into his own Vietnam as a gang of five local high-school delinquents, led by the psychopathic Dutra (James Spader), will make both kids’ lives hell in a rapidly escalating campaign of terror. All Mac’s imparted lessons about strength and survival are about to be put posthumously to the test.

Freshly arrived in this small town, Loren and Abby are ‘the new kids’ of the title, but hovering around the centre of this film is another pair of siblings, ‘the old kids’ Charlie and Mac. “Your father and I, we were very close when we were boys, did he ever tell you that?” Charlie asks his niece and nephew at Mac’s military funeral, in words that tell of brothers who have grown apart and become estranged since childhood.

At first the contrasts between the brothers seem obvious: Mac had gone from one success to another, whereas Charlie’s life has been a series of entrepreneurial failures (with his recently purchased ‘Santa Funland’ looking set to be just the latest of these). Mac’s home was decidedly middle class, where the children had their own separate rooms, while Charlie’s house is much further down the socioeconomic scale, with Loren and Abby having to share a messy corrugated barn. The two brothers are politically divided too.

Mac has risen through the ranks of the military, and his final proud achievement before his untimely death was to receive a medal from the incumbent President (i.e. Reagan), whereas Charlie believes “1960 was the prime year of our country”, chiefly because that was when “Kennedy was elected”. Yet despite these differences, Charlie is as patriotic as Mac (he raises the Stars and Stripes over Santa Funland every morning), and ultimately proves as brave too. 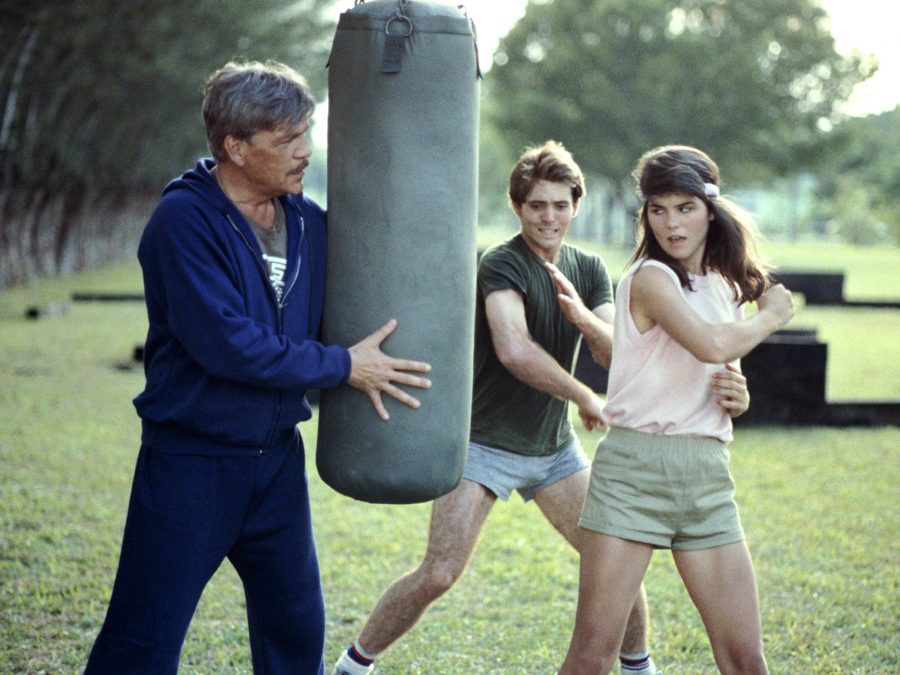 Loren and Abby must navigate these changes, not only adjusting to life in a new high school, but also helping Charlie realise his (American) dreams for the shabby amusement park. As military brats, they are used to constantly moving home and adapting to new circumstances – and they have soon befriended studious Mark (Eric Stoiltz) and the Sheriff’s daughter Karen (Paige Price), earned a more general popularity, and transformed Santa Funland into a working concern.

Yet the brother and sister’s assimilation to their new environs faces a far greater challenge from Dutra, a malicious, predatory, drug-dealing bully who feels threatened by Abby’s unyielding rejection and Loren’s fearless defiance, and who unleashes his boys like fighting dogs against the MacWilliams siblings. Still at the beginning of his career, Spader plays Dutra with unhinged menace – even if, as evidence of his versatility as an actor, he himself played the ‘new kid’ in Fritz Kiersch’s Tuff Turf (another juvenile delinquent film which came out in the same year).

As the gang executes Dutra’s jealous vendetta, amping up from wilful destruction of property to full-blown violent assaults on persons, and as Loren – a chip off the old block – carries out his own misguided Special Ops mission vainly designed to put a stop to the madness, it starts to become clear why Sean S Cunningham, who had famously produced Wes Craven’s The Last House on the Left and helmed Friday the 13th, was in charge of directing this film.

The New Kids never quite becomes a horror film, but it certainly plays with horror tropes. There is a shower scene clearly inspired by Alfred Hitchcock’s Psycho, and the scene ends with a ‘bunny boiler’ moment that anticipates Adrian Lyne’s Fatal Attraction by two years. The setting in an amusement park of the film’s climactic culling evokes genre films like Christopher Freeth’s Malatesta’s Carnival of Blood and Tobe Hooper’s The Funhouse – as well as the noirish hall of mirrors in Orson Welles’ The Lady From Shanghai – and is expressly characterised as a ‘bloodbath’ in a sensational (but not inaccurate) headline from the local newspaper.

In the end, Loren takes on five assailants who are determined to conduct a reign of terror – a feat which shows him assuming the heroic mantle of his father (who was recognised precisely for thwarting five terrorists). Yet while Abby may, in a moment of vulnerability, flirt with the idea of leaving Charlie and Fay and returning to the comfortable bourgeois lifestyle that Mac had afforded them, Loren sees both that Dutra’s super-heightened sense of entitlement has not in any way been tempered by his middle-class upbringing, and that in his way Charlie is as much of a hero as Mac. These realisations – about decency transcending class – represent the siblings’ true coming-of-age.

In many ways these ‘new kids’, with their clean-cut ways and just-say-no attitudes to drugs and sex, embody the values of the Reagan era, and the transfer of their own modest inheritance for investment in Charlie’s small (re)start-up business represents something akin to Reagan’s trickle-down economics. And yet Loren and Abby’s final, decidedly downwardly-mobile decision (in a decade that favoured the upwardly mobile) to stay with Charlie in preference to a ‘better’ (which is to say wealthier) lifestyle is simultaneously a commitment to family, and to a Democratic outlook at odds with their own father’s Republican allegiances.

Contrast this with Dutra, another affluent Reaganite kid from a comfortable, suburban background not unlike the MacWilliams’. Yet he is happy to prey on people like Charlie, and to exploit his much poorer friends for his own personal gain. Remember that Dutra’s persecution of Abby and her brother begins with a monetary bet that he will prove psychotically unwilling to lose, and that dehumanises anyone who stands in the way of his manic, murderous drive for profit.

Scripted by Stephen Gyllenhaal (with some input from Brian Taggert), and scored by Lalo Schifrin, The New Kids occupies a peculiar place for a studio quickie: on the one hand it is well-written and well-acted, with rounded characters and often witty dialogue; on the other, it becomes a violent survivalist exploitation flick not so very far removed in theme and tone from Mark L Lester’s reactionary high-school revenger Class of 1984.

That odd merger of high and low arguably represents a much greater tension in the film than any carnivalesque cat and mouse, and will leave hardened horror hounds and more ‘respectable’ viewers feeling equally, if differently, disappointed by whatever material in the film fails to conform to their specific desires. This is not necessarily a bad thing, as these clashes – both tonal and ideological – reflect the contradictions of the times, when Reaganomics were aspirational model for some, and nightmare for others.

The New Kids was originally released on VHS in the UK under the title Striking Back, with 54 seconds cut at the insistence of the BBFC. The New Kids is available on Blu-ray on 101 Films’ Black Label from 29 June.