Whether cheap trick or clever gimmick, the use of stereoscopic techniques has constantly pushed the boundaries of the medium. 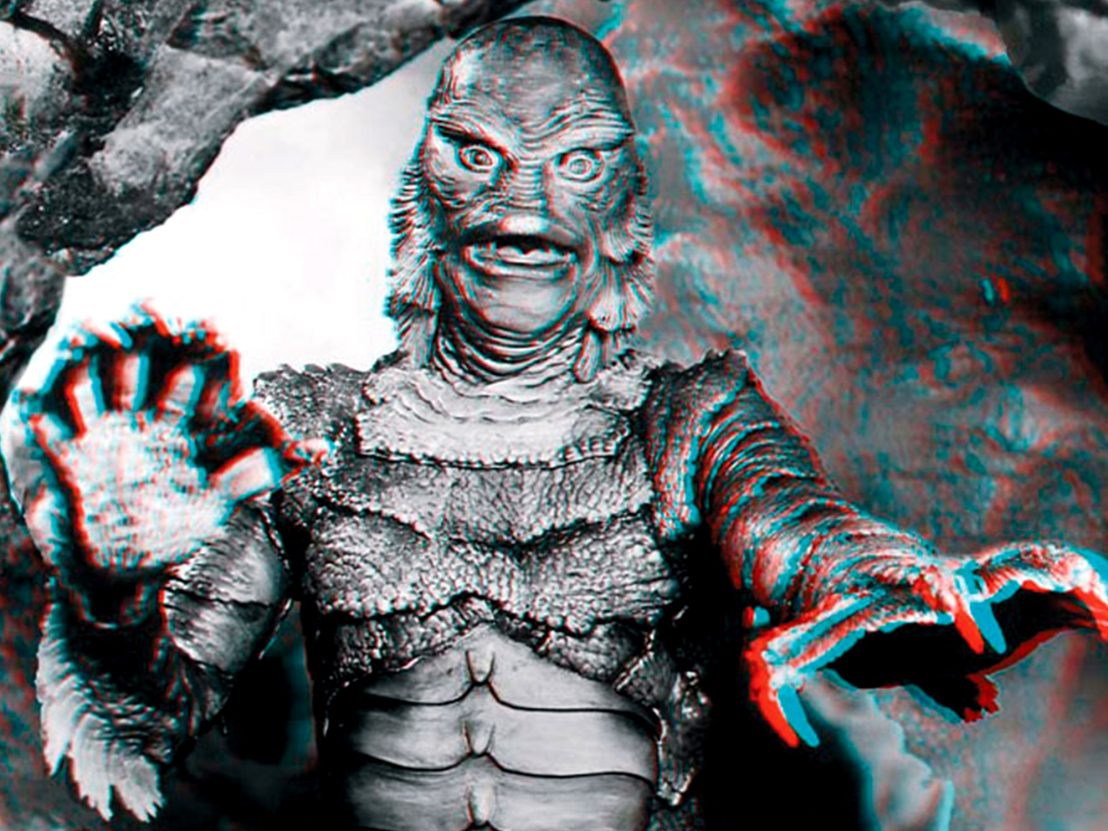 From virtually the beginning of cinema’s history, filmmakers have found new ways to push the boundaries of the medium. While recent thinking often resists the presumption that images should be a certain height and width, housed with the square or rectangular containers they’ve become contained to, much early experimentation fought in the other direction: against the flatness of the frame, and towards depth – towards 3D. Why should the world’s three dimensions, through capture, be reduced to just two?

Indeed, one of the most well known works of early cinema, the Lumière brothers’ L’arrivée d’un train en gare de La Ciotat has a 3D equivalent. Reshot with a stereoscopic camera, L’arrivée du Train is believed to have been first presented at the Paris World Fair in a single-viewer stereoscopic booth, and then later shown in a cinema alongside other 3D Lumière experiments at a meeting of the French Academy of Sciences in 1935.

Although experimentation continued throughout the decades that followed —notably in the form of ‘novelty’ shorts such as EW Hammons’ Plastigrams, a series of shortform exercises exploring extra-dimensionality, Jacob F Leventhal and John A Norling’s Audioscopiks, a metatextual exercise that explained stereoscopic technology while demonstrating it, and John Norlings’ New Dimensions, a three-colour 3D stop-motion Chrysler commercial – it wasn’t until the 1950s that 3D became more widely popular.

Faced with falling audience figures and the advent of television, US studio executives turned, alongside other technologies such as CinemaScope and Cinerama, to 3D in the hope of tempting viewers back to the big screen. Arch Oboler’s Bwana Devil – produced using a new production method (Natural Vision 3D) and and featuring full colour and sound – kickstarted a craze in mass market 3D. Marketed with the tagline ‘A lion in your lap! A lover in your arms!’, the film made $2.5m at the US box office upon its release in 1952.

Among more than 50 productions released within a two-year spell, one of the more renowned titles is Andre De Toth’s Vincent Price-starring House of Wax, a stereoscopic film made by a director who, ironically, only had one eye. Other highlights included Jack Arnold’s It Came from Outer Space, a sci-fi romp based on a Ray Bradbury treatment, Roy Ward Baker’s crime noir Inferno and George Sidney’s musical Kiss Me Kate.

Even Alfred Hitchcock succumbed to studio pressure, releasing Dial M For Murder in 3D. Now regarded as one of the most creative examples of the format, with the story unfolding within a single apartment, the film fully renders the uneasy contours of that confined space through the extra visual space afforded. That film arrived around the same time as Arnold’s follow-up success, Creature from the Black Lagoon, a monster flick that spawned a quickly and cynically produced sequel, Revenge of the Creature, which signalled the end of the 1950s 3D epoch. 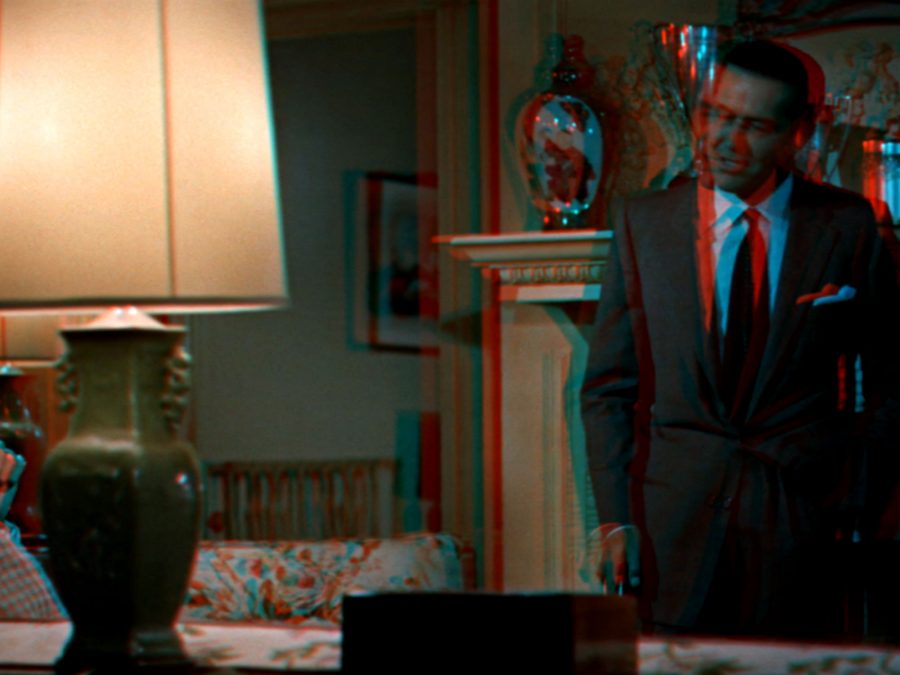 IMAX 3D was developed parallel to this, and the company’s co-founder Roman Croitor directed We Are Born of Stars, while Colin Low and Tony Ianzelo made Transitions – both pioneering if forgettable 3D offerings featuring computer animation. A year later, in 1986, Disney released Francis Ford Coppola’s Captain EO, a Michael Jackson vehicle made specifically to be installed in their theme parks, with all manner of lasers, water jets, fog and hydraulic apparatus attached. By this point 3D was less an experiment than an attraction.

In theme parks, to name just a few examples, there was Jim Henson’s Muppet*Vision 3-D, Randal Kleiser’s Honey, I Shrunk the Audience and James Cameron, John Bruno and Stan Winston’s T-2 3D: Battle Across Time, big budget installations which stayed on site for years. In theatres, Brett Leonard’s T-Rex: Back to the Cretaceous and Ben Stassen’s Haunted Castle linger in memory, as does Colin Davies and Elaine Despins’ Cyberworld, an omnibus oddity that featured post-converted 3D segments from The Simpsons and Antz alongside a Pet Shop Boys music video.

Meanwhile, the appearance of digital production and projection began to see 3D reincorporated into the regular theatregoing experience, offering stereoscopy at scale. James Cameron’s Ghosts of the Abyss, a documentary about an expedition to the wreck of the RMS Titanic, was shot in 3D with a specially built digital camera. The same equipment was also used for Robert Rodriguez’s Spy Kids 3: Game Over and The Adventures of Shark Boy and Lava Girl 3-D.

Robert Zemeckis’ The Polar Express, a computer animated motion-capture feature released simultaneously in 2D and IMAX 3D, took more than $300m at the box office, with the 3D version constituting a majority of that figure. This seemed high until Cameron released Avatar, which grossed in excess of $2.75bn, surpassing the director’s own record for the highest grossing film of all time (previously held by Titanic). Unsurprisingly, this led to many more studio films being made and released in 3D, with countless others lazily post-converted from 2D.

There is, however a different side to the story of 3D cinema, with smaller-scale stereoscopic practitioners continuing the technology’s tradition of experimentation over the years. Early computer animation pioneer Lillian F Schwartz made numerous films that could be viewed either in 2D, or in 3D with chromadepth glasses, including Pixellation, Mutations and UFO. Hyper-prolific experimentalist Ken Jacobs played continually with glasses-free stereoscopy, making many films that produce three dimensional effects such as Capitalism: Child Labor, Gift of Fire or Seeking the Monkey King, alongside his ‘magic lantern’ shadow performances.

Two recent experimental 3D features also stand as touchstones. Jean-Luc Godard, having delved into the third dimension on several past occasions, made the tactile, mutable Goodbye to Language in 2014, a 3D film that contains a single stereoscopic trick-shot so incomprehensible and beguiling that it has inspired devotion since unlike few other cinematic moments, in any dimension. Made by a self-proclaimed fan of Godard’s film, Blake Williams’ Prototype is a mind-boggling development of the filmmaker’s obsession with 3D, taking the devastating 1900 hurricane of Galveston Texas as a starting point for a warped, wild trip through the history of technology, stereoscopy and more.

These are but few examples from an expansive alternate history; films which, while certifiably niche, have been collected and appraised in 3D experimental film showcases such as BAMcinématek’s ‘3D in the 21st Century’ series, Oberhausen’s theme programme ‘The Third Image – 3D Cinema as Experiment’ or Big Ears Festival’s recent ‘Stereo Visions’ season. Ever vilified, the hostility directed towards stereoscopic technology over the years has always been met with a similarly intense passion from practitioners and proponents. Appearing in basements, theme parks, galleries and theatres, over more than a century of fascination – both popular and subcultural – 3D refuses to disappear.

Blake Williams’ Prototype premieres in the UK on 19 June at London’s Genesis Cinema, screening alongside two of the director’s other 3D films. 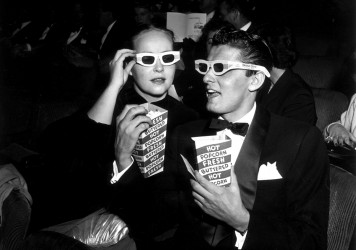