Watch the blistering first trailer for The Dark Tower

Adapting Stephen King’s ‘The Dark Tower’ for the big screen was never going to be an easy task – not when his acclaimed series of eight books contains stylistic elements and narrative themes from multiple genres, namely fantasy, science fiction, horror and western.

But judging by this first official trailer it looks as though writer/director Nikolaj Arcel and screenwriters Akiva Goldsman, Jeff Pinkner and Anders Thomas Jensen have pulled it off, even if the film appears to strike a slightly different tone to King’s source material.

Idris Elba stars as Roland Deschain aka The Gunslinger, who relentlessly pursues Matthew McConaughey’s mysterious Man in Black across a barren landscape which evokes America’s Old West. The Gunslinger is simultaneously searching for the titular Dark Tower, which may hold the secret to restoring his dying world.

This trailer effectively sets up the story without giving to much away. Promisingly, it also doesn’t skimp on the action, and any use of an old Ennio Morricone score is always going to get a big tick from us. Check it out and let us know your thoughts @LWLies

The Dark Tower is released 4 August. 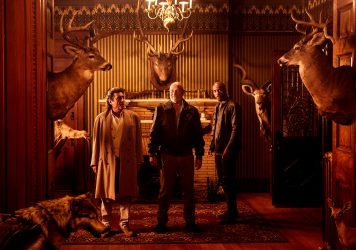