We’ve been eagerly awaiting a first look at James Ponsoldt’s adaptation of Dave Eggers’ tech industry satire ‘The Circle’, and judging by this first trailer the director hasn’t disappointed. Tom Hanks sports a Steve Jobs-style turtleneck as the CEO of the world’s largest internet company, delivering some compelling spiel about his firm’s belief in the perfectibility of human beings. The eerie accompanying piano music immediately sets the dystopian tone, suggesting the film will be faithful to the source material.

We also get to glimpse Emma Watson as Mae Holland, who grows increasingly concerned throughout this teaser over the insidious spectre of modern technology. And, off the back of his breakout performance in 2015’s The Force Awakens, John Boyega stars as another rogue who seems to be unravelling the truth at the heart of the eponymous Orwellian organisation. This trailer hints at something darker too, with drone crashes and shrill screams preceding the haunting “watching you” that comes at the end. Watch it above and let us know what you think @LWLies 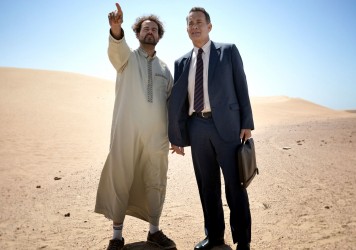