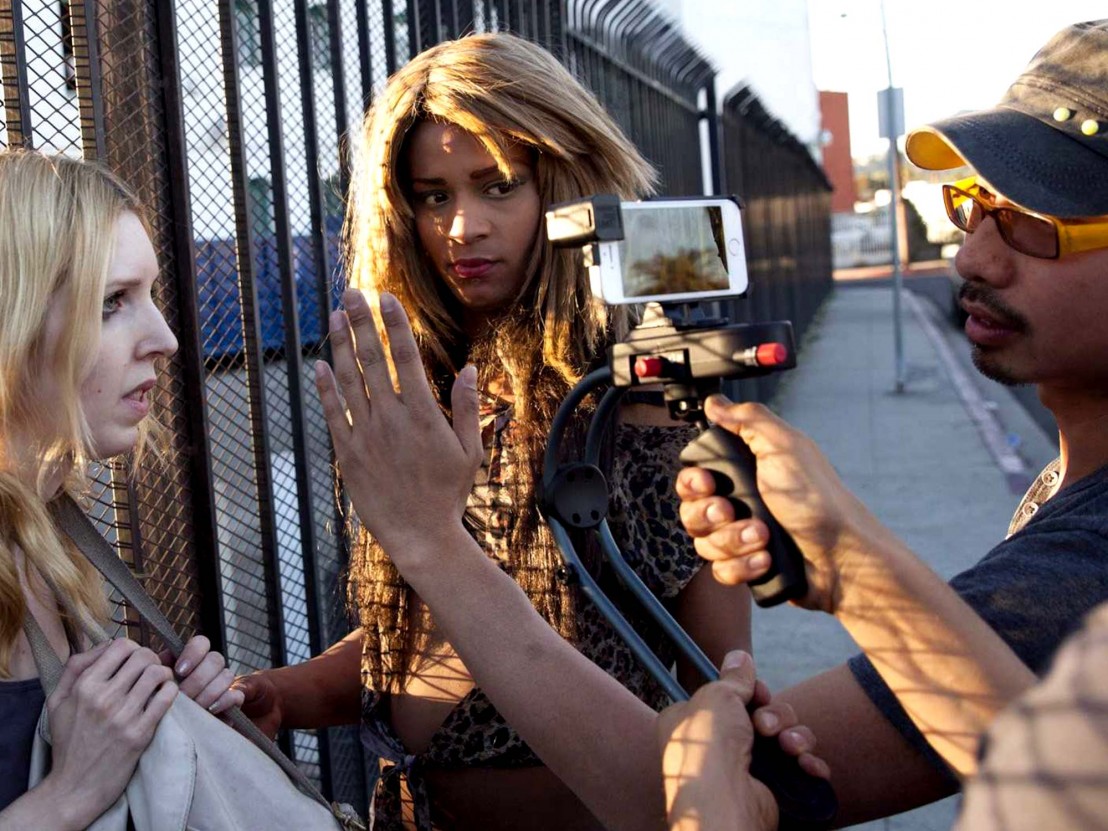 Making a fictional feature film using the camera on a mobile phone is a crazy thing to do. You can’t refocus or adjust the exposure in the middle of a shot. Nothing is quite sharp, but nothing recedes softly into the background either. You’re always the same distance from your subject. You can put the phone on a stabiliser to stop the inevitable shaking, use an app to lock the frame rate and manually adjust the colour temperature, reformat the image for widescreen with an adapter, pump up the saturation in post, and you’d still get better looking footage with the video function on an entry level DSLR.

So what was Sean Baker thinking when he decided to shoot Tangerine, an 88-minute movie about a trans sex worker on the war path, on an iPhone 5s? The film, which takes place in Los Angeles on Christmas Eve, premiered at Sundance back in January, and critics weren’t told that it was shot on a smart phone until the credits rolled. Since then, press interviews with Baker have been dominated by a handful of recurring questions: How did you do it? Why? And what does this mean for the future of movies?

He kept repeating variations on the same answers. There were budgetary constraints; he’s made four previous features but none of them were commercial hits. Shooting on a phone allowed him to capture the grime and neon glow of Hollywood without attracting crowds, and it put his performers at ease. The film’s two stars, Kitana Kiki Rodriguez and Mya Taylor, whom Baker met through an LGBT community centre, had no previous acting experience, and it’s true that their performances are fantastic, full of warring charisma and vulnerability. Baker has also spoken about the way that the cameras allowed his crew to shoot easily in cars, circle and track the actors on a bicycle, or chase them as they careened down Santa Monica Boulevard.

There’s certainly an intoxicating energy that’s captured in the film (thanks also to a trap soundtrack featuring the relatively unknown New Jersey teenager DJ Lightup) but all of the above would still be possible if Baker had kept his crew minimal and shot quickly on a small, cheap video camera – like a Blackmagic Micro, which fits in one hand, is only a hundred bucks more expensive than a brand new iPhone, and isn’t primarily designed for texting, snapchatting and hailing an Uber.

After all, this was a microbudget film, but it wasn’t made for nothing. Filmmakers Mark and Jay Duplass, referred to by Wired earlier this year as an “unlikely Hollywood juggernaut”, are credited as executive producers. The professional sound department and audio equipment consumed a big chunk of the $100,000-ish budget and DoP Radium Cheung had previously directed episodes of FX TV series The Americans. As a cinematographer, he said, he had to be sold on the idea: “This is the last thing we would want to do,” he told IndieWire, “to shoot a movie with telephones.” 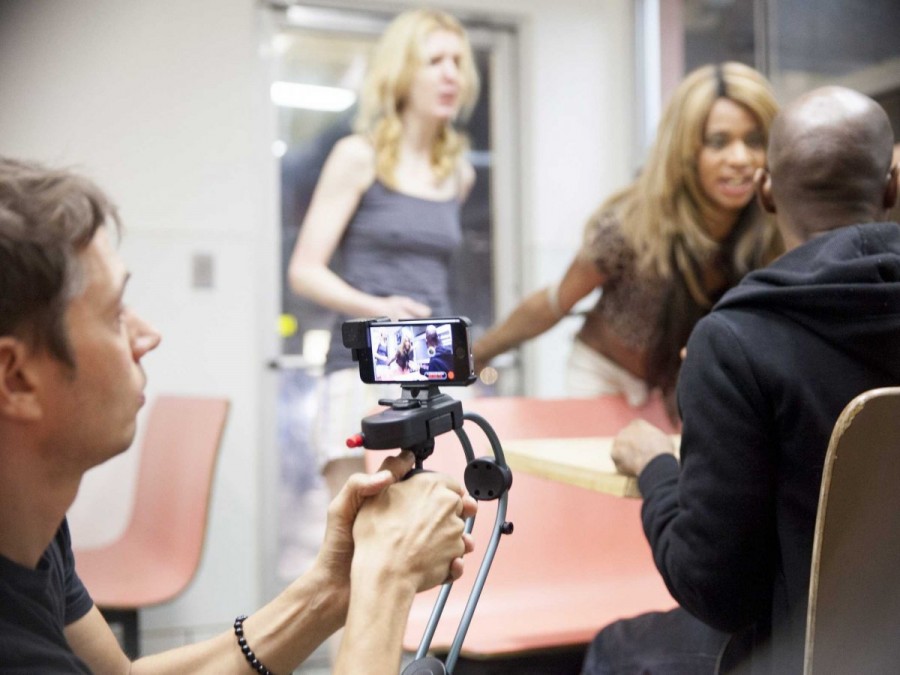 You don’t make an iPhone movie to save money, and you don’t make it just so your stars adjust a little quicker to being on set. You do it for the same reasons artists have been doing crazy shit forever: to see if you can, and to find out what might happen in the attempt.

Which isn’t to say this kind of thing hasn’t been tried before. Ruben Kazantsev, who has been running the iPhone Film Festival since 2010, tells LWLies that a short film called Happenstance was made on a hacked iPhone 3G in 2009. Oldboy director Park Chan-wook made an award-winning short called Night Fishing on an iPhone 4 in 2011, which was paid for by South Korea’s only iPhone distributor at the time. A movie called Olive, which was made with a Nokia N8 for $500,000, billed itself as “the very first full-length feature film shot 100 per cent on a cellphone” when it hit festivals in 2011. Later, both This Is Not A Film, made by Iranian auteur Jafar Panahi while he was under house arrest, and the 2012 documentary Searching for Sugar Man were completed using cellphone footage for pragmatic reasons.

Tangerine is a step forward. It seems to be the only film whose unusual production technique was motivated first and foremost by a kind of playful, creative showmanship: that gadget you have in your pocket – just see what I can do with it.
“That’s how innovation happens,” says Sonja Schenk, a multimedia artist and author of the The Digital Filmmaking Handbook. “People see potential that no one else realised before and stake out new territory.” Joseph Ernst, who has made one film using a 100-year-old hand-cranked camera and another one entirely inside a human mouth, says that “having some sort of parameters as a filmmaker does help” – forcing you to think outside of the usual conventions in order to solve a problem. “If you have zero parameters in which to work, it can be quite debilitating.”

Carlton Evans, who has been running the Disposable Film Festival, which champions films made using non-professional equipment, in San Francisco since 2007, says that while he watches a lot of movies, “most of the films we’ve featured in the last few years, I haven’t seen anything like it. There are techniques to telling a story that you never see otherwise.” This marks an evolution from the early “punk rock” days of the festival.“It’s like, what happens if we take a cheap camera and attach it to a helium balloon and have it float across Berlin? Will I be able to recover it? What will the footage look like?”

There’s some of that anarchy in Tangerine’s DNA – “Let’s do this man, it’s like punk rock,” is what Mark Duplass told Baker on hearing the idea, according to a Vice interview. In reality the film’s stylised aesthetic has been executed with a great deal of care and precision, from the first shot of a sprinkles-covered doughnut on a canary-yellow plastic table to the last, quiet moment in a fluorescent-lit laundromat. And in fact, whether this was planned or the kind of happy accident that often comes from experimenting, the best thing about the combination of imperfect image quality and pumped-up colour saturation is that it serves as a visual metaphor for the story itself.

Baker’s characters are broke, lonely and hurting, but they talk themselves into their own grand narratives, improvising drama, comedy, glamour, power and creativity from the raw materials life has thrown their way. Shooting on the most basic equipment possible, and using it to create something beautiful and exciting makes a certain kind of sense. “If I had the budget I would’ve shot this on film,” Baker told US radio host Terry Gross in July, “but sometimes you just have to make the most of what you have.”

Tangerine is out in the UK on 13 November. Read the LWLies Recommends review.