Come to this exhibition inspired by hand-painted Bollywood 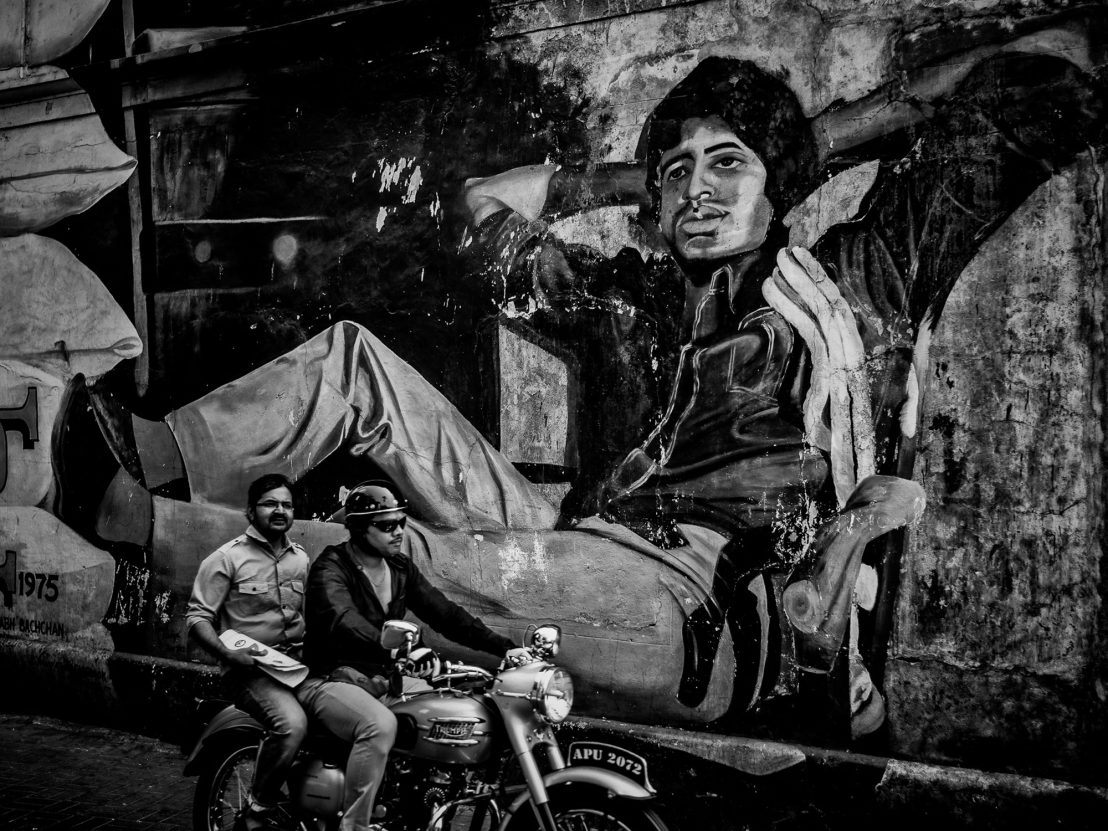 Bollywood is one of the world’s largest film production centres, creating nearly 2,000 films a year. But what fascinated photographer Philippe Lopez, who lived in India from 2002-2005, was that despite its size and glamour, hand-painted billboards were an important way to bestow status on a Bollywood release.

This illustrated and handcrafted side of Bollywood fascinated Lopez. After winning the World Press Photography Award for his painterly image of a procession of survivors after Typhoon Taiyuan in 2013, he returned to India to document the disappearing art of Bollywood sign painters and look more widely at the role of handcrafted images in Indian urban life.

The result is ‘Resonance: Screen to Street in India,’ his first solo exhibition, which opens in London on 7 November. He spoke to LWLies about a few of his favourite images from the exhibition. 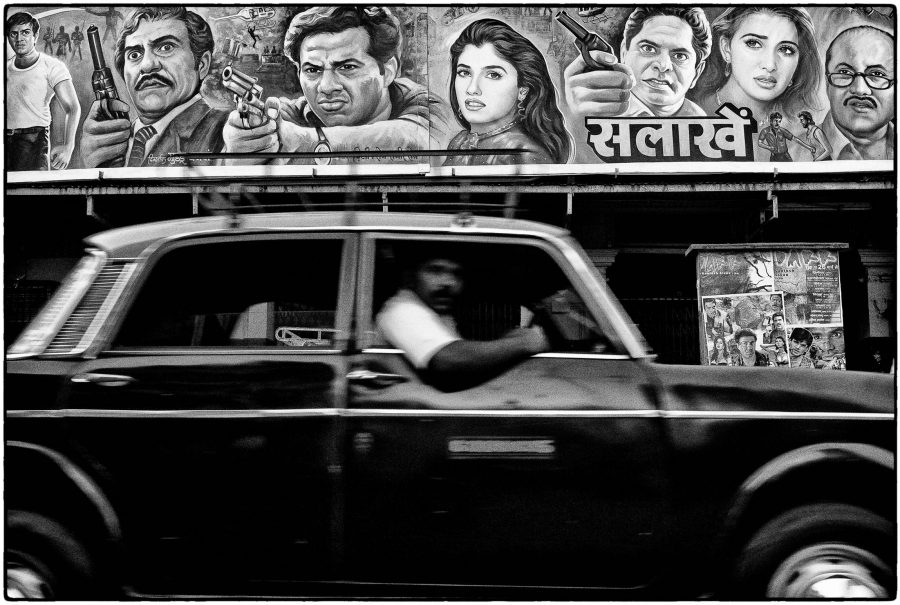 The hand-painted billboards are rapidly being replaced by offset printing, but one of the most prominent surviving examples is outside Mumbai’s iconic Alfred Talkies cinema.

“What’s interesting in these Bollywood paintings is they have this perspective where the gun is a little bit bigger than the head,” Lopez says. “It’s like these ’80s movie posters in the Western world – very exaggerated. It’s an alternate reality. Often, it’s not even what’s in the movie, it’s something else – a medium in itself. You have the movie and then you have the painting.”

The hand-painted Bollywood billboard-style has influenced other marketing from Coca-Cola to politics. Politicians often hire sign painters to create Bollywood-style street art. “The way it’s painted – the lighting of the face – you have all the codes of the movies. These politicians – they could be actors.” 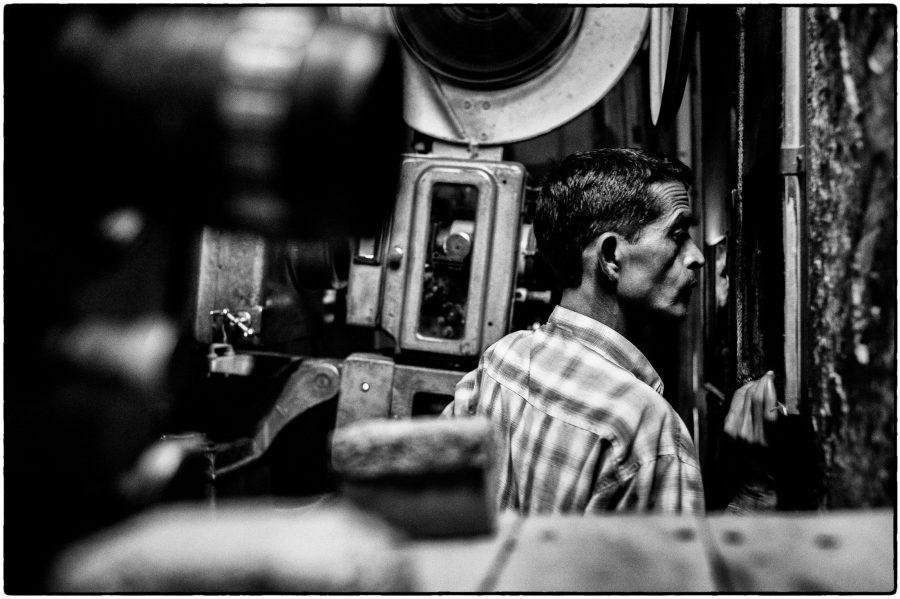 In the darkened projection room in a cinema Shekhawati, Rajasthan, the projectionist’s assistant eyes the screen in the next room as his left hand adjusts the focus ring on a vintage 1950 projector.

“It’s intense and I can relate to that from when you focus with a manual camera. There’s resonance because he’s focusing and I am too. It’s very dark. I was trying to get the focus on his face,” Lopez says. 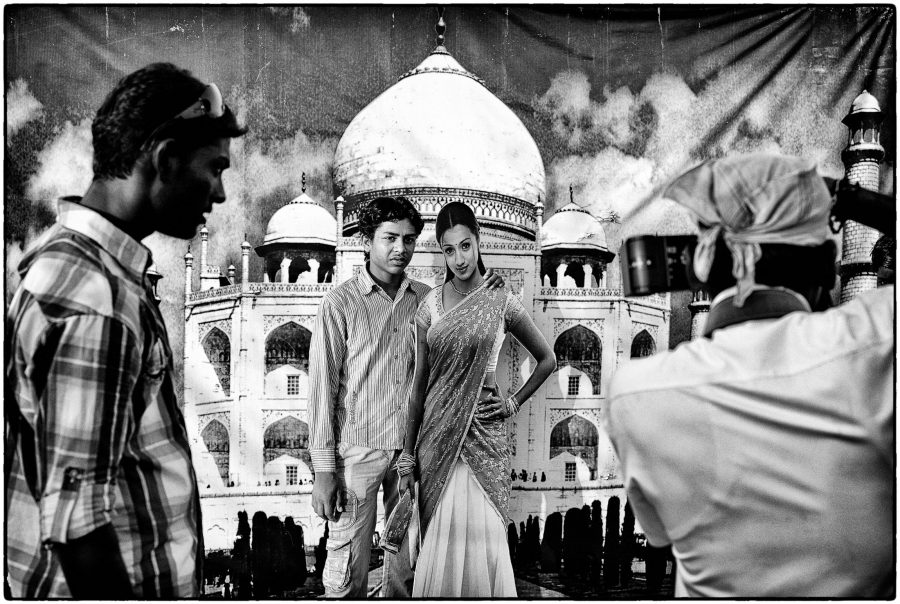 On a beach in Chenai, a photographer had set up a photography booth where visitors could have their portrait taken with life-size cutouts of Bollywood Stars against iconic India backdrops, like the Taj Mahal.

“I really love the ‘location’, the unreal aspect of the location is given away by the top right corner of the frame because you can see it’s fabric. It’s almost like you’re seeing the glitch in the Matrix. You can see it’s not real but you don’t see it right away.”

“It’s funny but it’s also sweet. His hand on the shoulder, you know it’s not feeling a real shoulder, it’s a piece of wood, but it’s there’s also a new reality in the way you might look at the picture.” 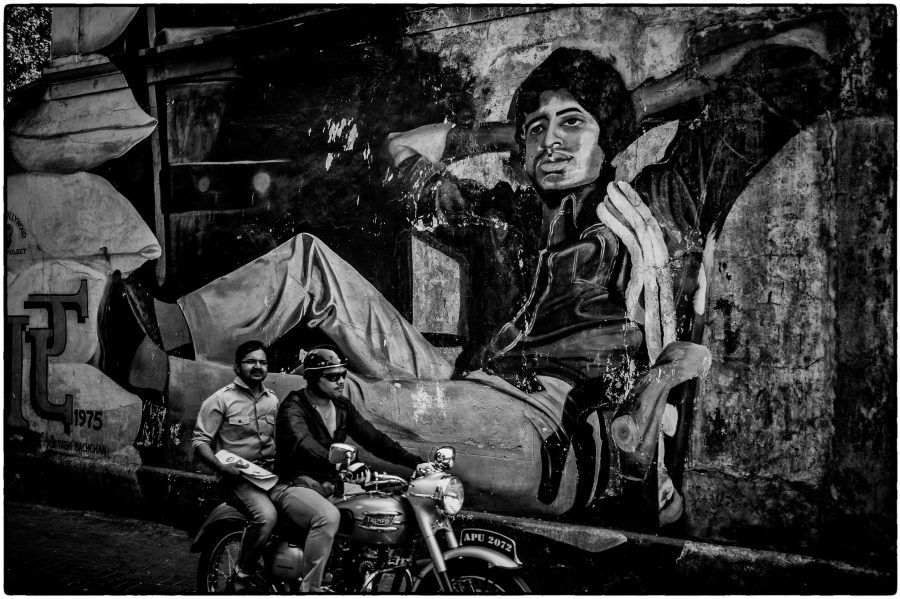 Amitabh Bachchan, Bollywood’s most iconic star, gained a reputation as India’s “angry young man” for a series of roles – including 1975’s Dewaar – he played in the 1970s that made him a superstar. This street art mural in Mumbai is part of a series of murals created in 2012 to celebrate a century of Indian cinema.

“I like the fact it’s a modern mural on a very old wall and you have this modern street art representing an old movie. New paint on an old wall used to replicate an exact frame from a scene in the movie.”

“I also love the different scale between this huge guy sitting on the chair and then these two people, much smaller, and they’re riding an old Triumph motorbike, which is probably as old as the movie. But it’s mainly about the mural – already decaying – paying tribute to India’s most famous actor.”