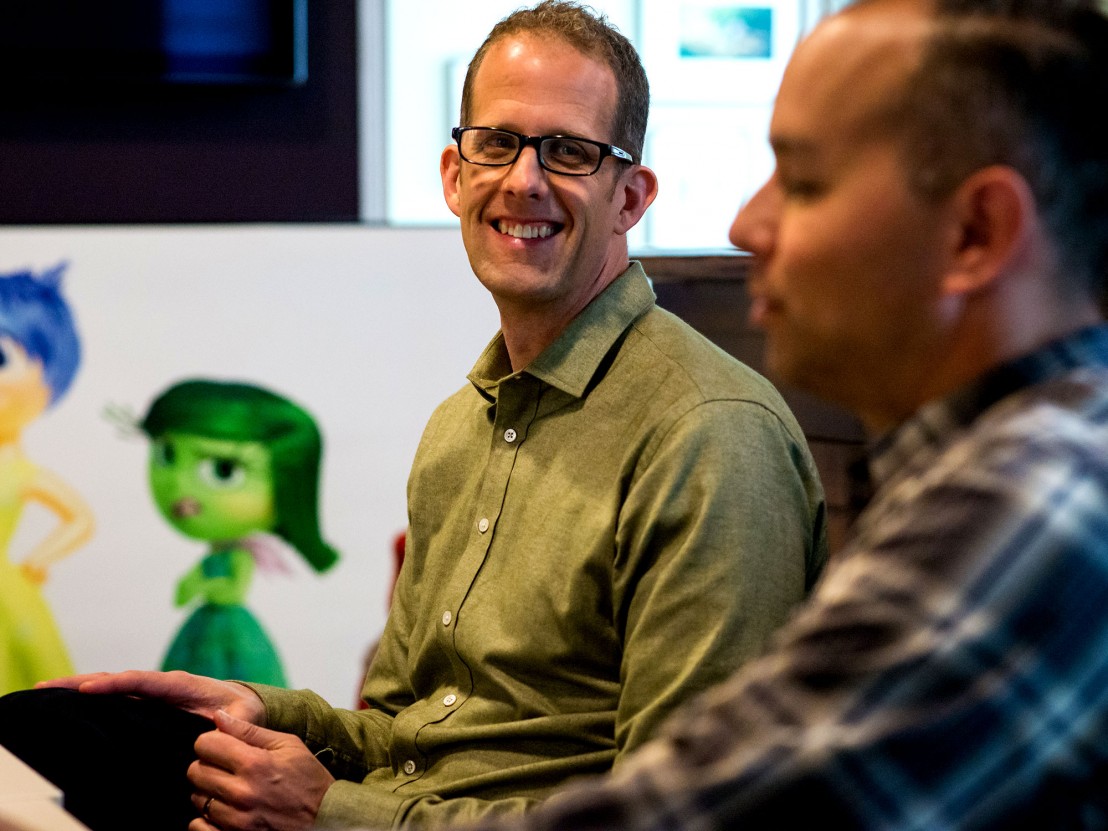 A couple of months back we began hosting a regular movie pub quiz night at one of our favourite north London haunts, the June edition of which was themed around all things Disney to coincide with the release of our Tomorrowland A World Beyond issue.

With Disney/Pixar’s latest triumph, Inside Out, hitting cinemas 24 July, we took the opportunity to pose the Pixar round from said quiz to director Pete Docter and producer Jonas Rivera, offering them the chance to team up and pit their wits against our resident quizmaster. Here’s how they got on…

Question 2: In Toy Story, on which foot does Woody have the word ‘Andy’ inscribed?

JR: You animated him… I think it’s his left foot.

PD: Really? I’m trying to think of the scene where he’s under the crate and he lifts it up to look at the inscription…

JR: Maybe it’s just ’cause I’m left-handed and that’s how I think.

PD: If I were to act it out I’d say right, but it really depends on the camera. Let’s go right.

Correct. Question 3: In Finding Nemo, what is the name and address of the dentist who takes Nemo?

PD: It’s definitely Wallaby Way. I can’t get the groove for where it goes. Can we pass?

JR: Okay, let’s come back to that.

Question 4: Actor John Ratzenberger has been described as Pixar’s lucky charm, having voiced a character in every one of the studio’s feature films. But what was the name of his character in the long-running TV sitcom that made him famous?

Correct. Easy one now… Question 5: Brad Bird directed The Incredibles and which other Pixar film?

Correct. Question 6: In Monsters, Inc what is the name of the restaurant that Mike Wazowski takes his girlfriend Celia to for her birthday?

PD: Ray, who we actually got to meet a couple of times.

Correct. Question 7: In A Bug’s Life, what is Francis the Ladybird’s circus act?

PD: There was Slim, Heimlich, Rosie…

PD: Officially? According to who?

PD: Ha, well I guess he/she has an issue with that in the film so okay, I can accept that.

Question 8: Up was the second animated feature to receive a Best Picture nomination at the Academy Awards. What was the first film?

JR: Beauty and the Beast.

PD: And the third one was Toy Story 3.

Correct. Question 9: What is the name of the classic Hollywood musical Wall-E is shown watching, and for an extra point, who directed it?

Incorrect. It was Hello, Dolly! Bonus point is still up for grabs…

PD: Oh man… I’m not going to be able to tell you that. Jonas?

JR: I got nothing…

It was Gene Kelly.

JR: Really? I knew he did Singin’ in the Rain… Here’s some trivia for you: when Andrew [Stanton] was cutting his reels [for Wall-E] I was the one that gave him the scratch track, because I had it from Disneyland, Main Street.

PD: There were a number of people who were willing to kill him because they couldn’t get that song out of their heads. It echoed through the halls for months.

Final question: Billy Crystal was offered the role of Mike in Monsters, Inc after previously turning down which iconic Pixar character?

PD: He’s thinks it’s Woody, I’ve heard him say that in a couple of interviews before.

Do you guys remember his audition?

PD: Oh sure. We were all excited because he has a very specific voice and sense of character and he nailed the audition but for whatever reason he decided not to go any further with it. He said later, when we worked with him on Monsters, ‘I had a very bad ex-agent,’ who I guess advised him to pass on it. But you know, in his defence it was the first one…

PD: In the long run I guess we would have just made Buzz a completely different character.

JR: Yeah, and Tim Allen playing him so deluded ended up working so well.

PD: The first session we had with him was actually kind of a disaster in my mind. I had a very specific idea of what I thought that character should be. I always imagined someone doing it with a Gary Owens/Space Ghost kinda superhero cadence, almost melodramatic. But Tim didn’t do that at all. I remember talking to Stanton about it and he’d already decided we were going to have to rewrite the character to fit what Tim was doing. In the end, of course, that made it way better.

JR: You’re gonna have to help us out here…

PD: P Sherman! It’s funny, my only perception of Sydney was from that movie and I went there a couple of months ago and it’s very different.

JR: You only really see the dentist’s office in the movie though…