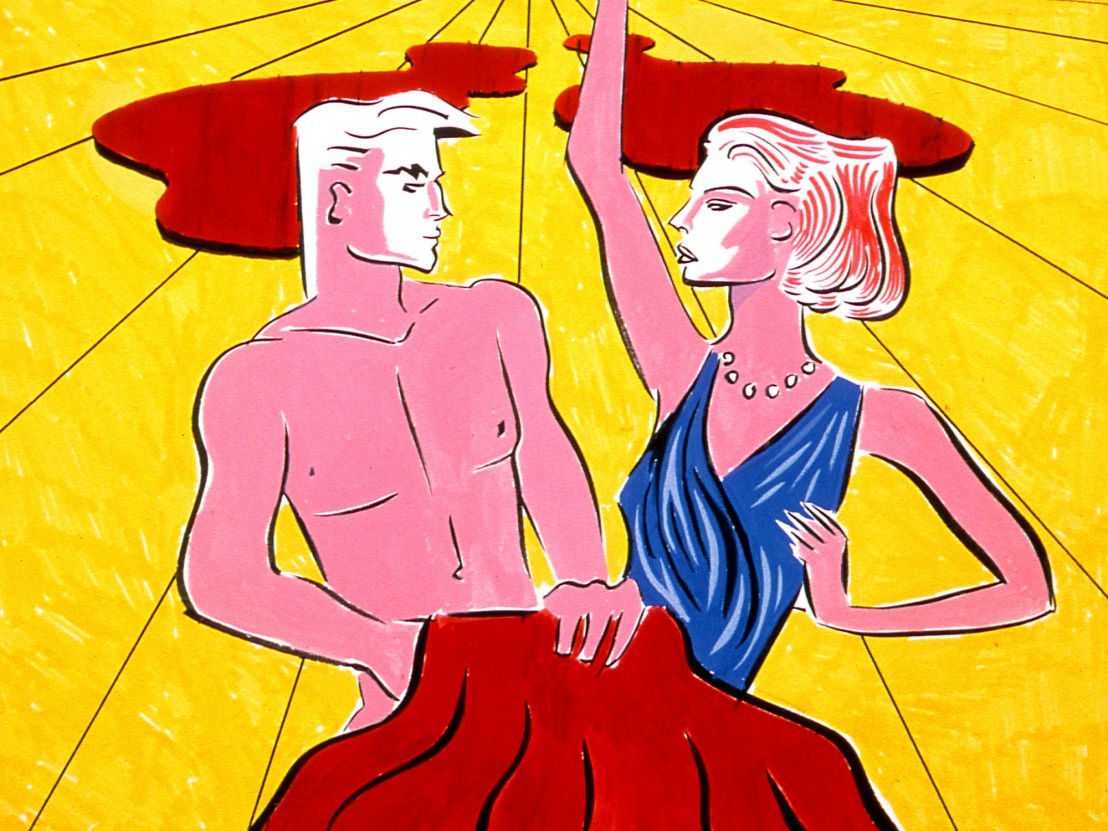 It would seem that the art of modern movie poster design is to make a film appear less radical, less daring, and as cosily generic as possible. Using this key marketing tool as a way to scream about a film’s potentially idiosyncratic content is generally frowned upon – movie posters must promise a uniform experience, not an unknown one. They are a device used to connect films to other, possibly more successful films. If you liked that, you’ll like this.

In this domain, Spanish director Pedro Almodóvar is an island unto himself, his long-time production company El Deseo commissioning posters that offer a bracingly honest reflection of any given film’s tone and content. Here are 10 of his most eye-popping creations… 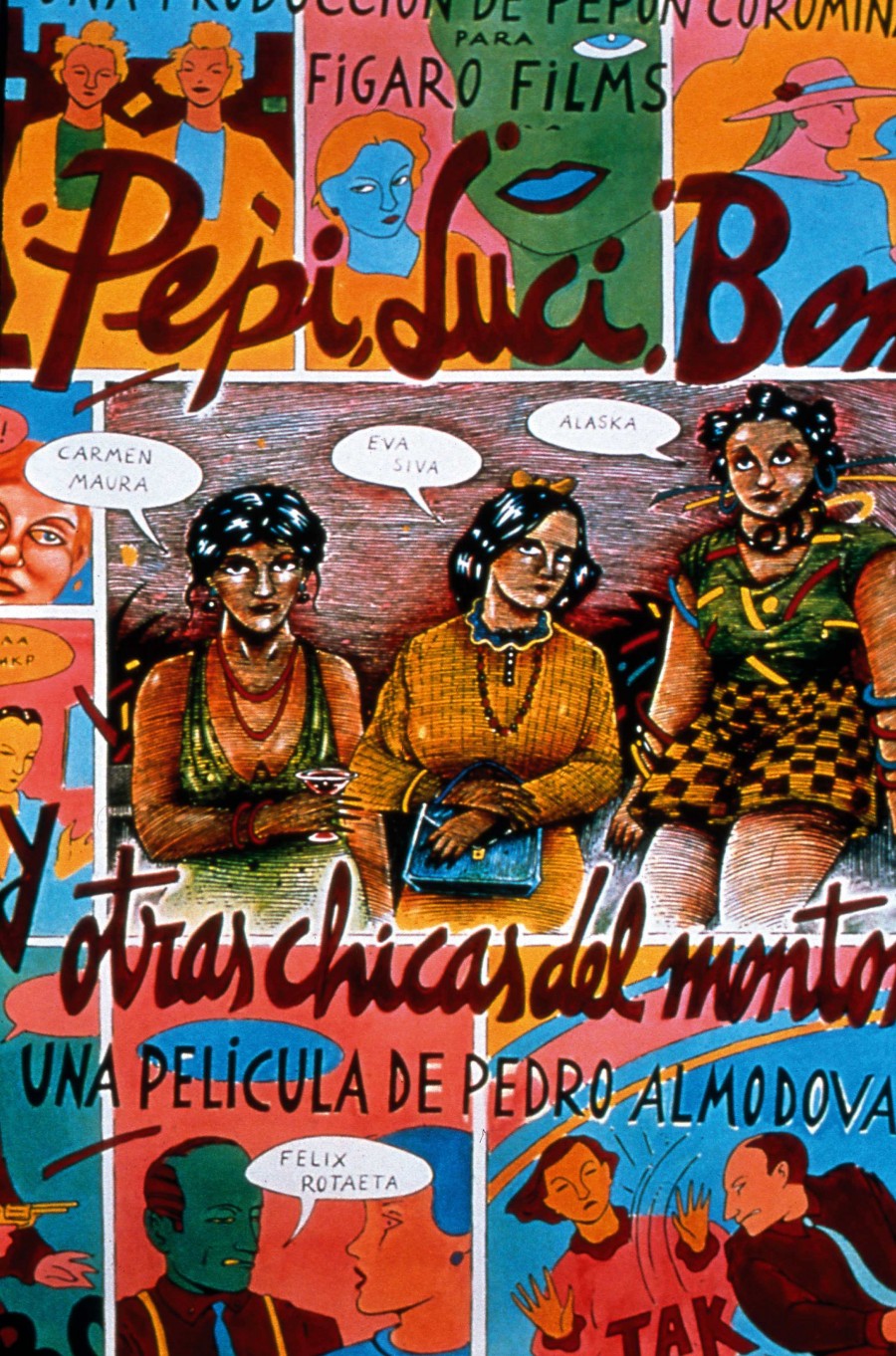 Almodóvar had spend much of the 1970s, since the death of General Franco in fact, developing his voice and producing numerous short films. It wasn’t until 1980 that he delivered his first feature work, the shambling, rambling post-punk opus, Pepi, Luci, Bom. In many ways, the film remains a blueprint for a director obsessed with celebrating empowered, sexualised, and romantic women, and this poster by cult Spanish illustrator Ceesepe (aka Carlos Sánchez Pérez) perfectly encapsulates its handmade, ugly-beautiful vibe. 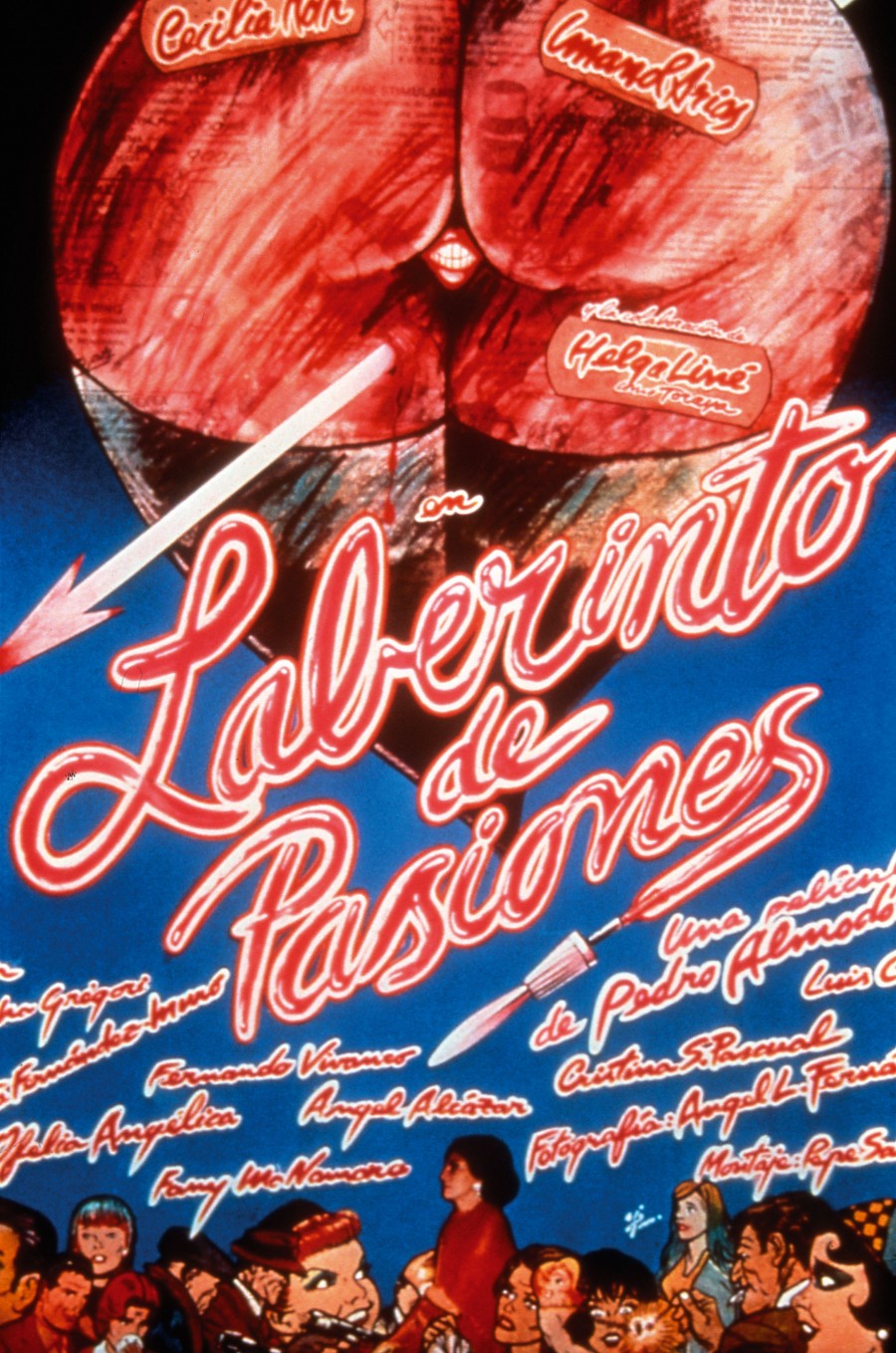 The director’s second featured capitalised on the outrages of his debut and gave us the story set in the underground punk scene and a runaway’s dealings with an S&M nympho goddess known as Sexilia. This scrappy poster, which resembles a gaudy gig flyer, was designed by Ivan Zulueta, a director in his own right who retreated from filmmaking in the 1980s due to his heroin addiction. 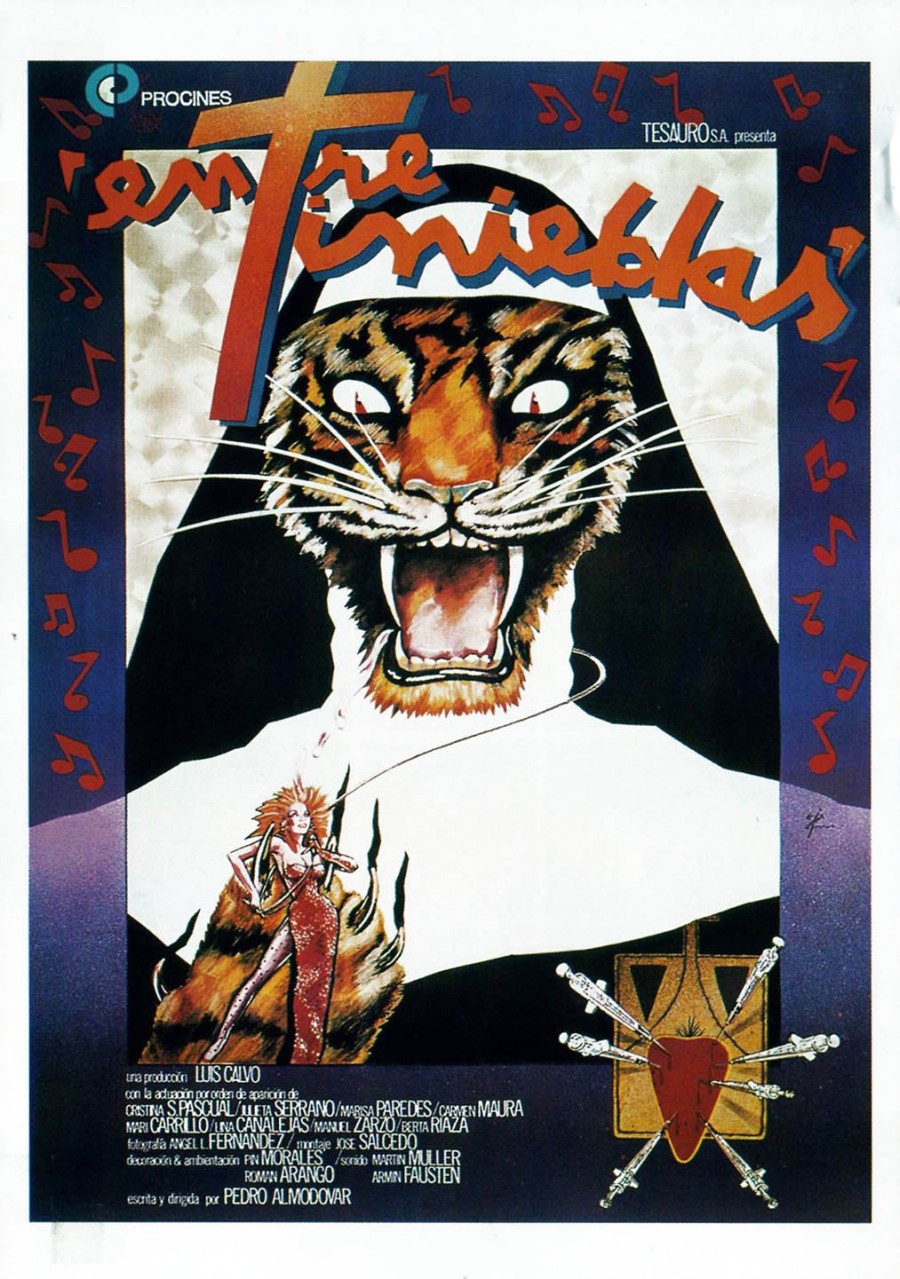 The poster for 1983’s Dark Habits is another Ivan Zulueta job, expressing the film’s core conceit of nuns going wild with sex and heroin. Following years of deep conservatism and censorship, it seemed that Almodóvar was on a mission to release all his pent up frustrations and push the envelope of decency as far as humanly possible. 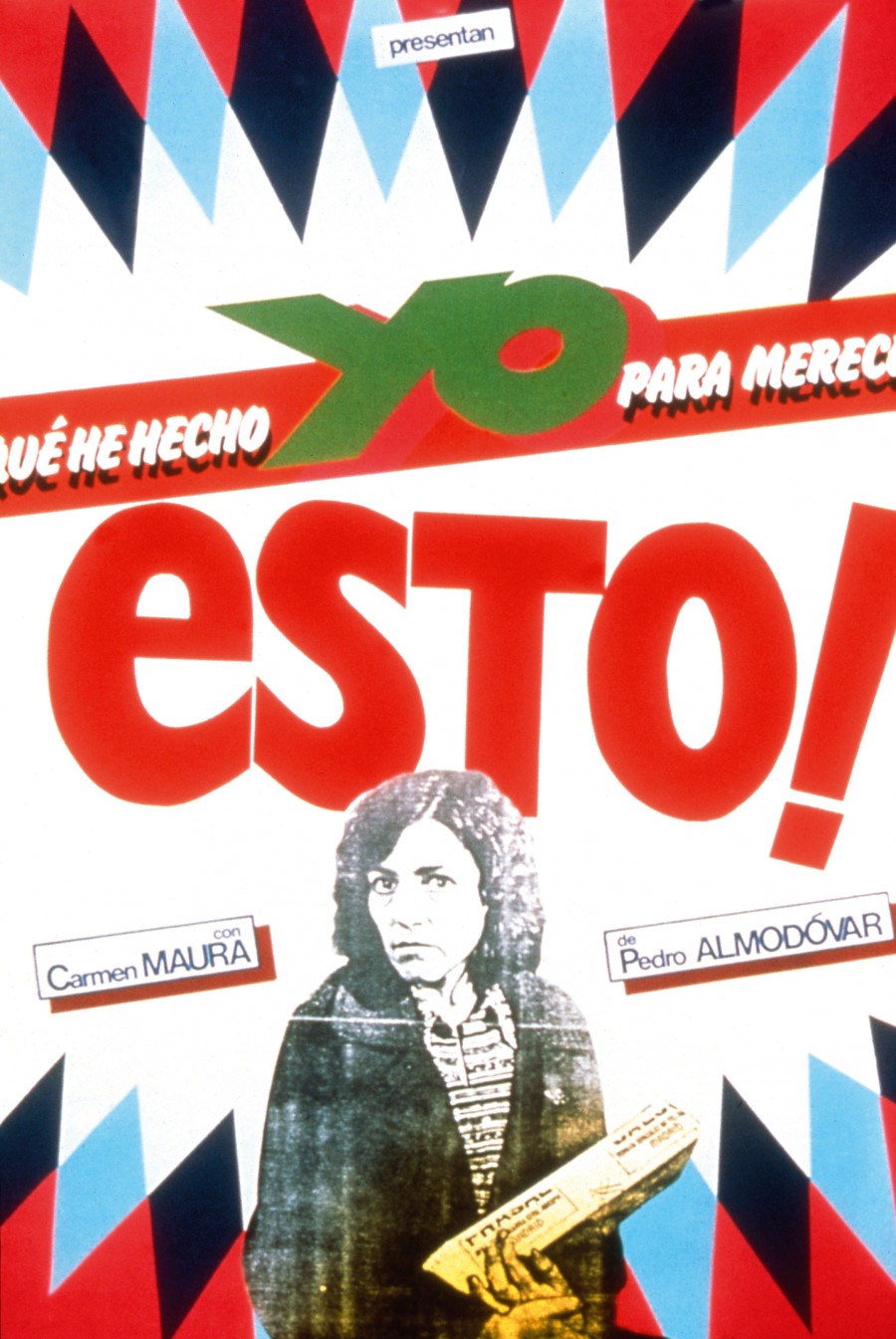 4. What Have I Done to Deserve This?

Though she had starred in all of his features to this point, it wasn’t until 1984’s What Have I Done To Deserve This? that actor Carmen Maura cemented her reputation as Almodóvar’s key early muse. The film is like a dark comic riff on noir classic Mildred Pierce, as Maura’s Gloria must suffer the daily indignities that come with being a housewife. Poster art is, again, from Ivan Zulueta. 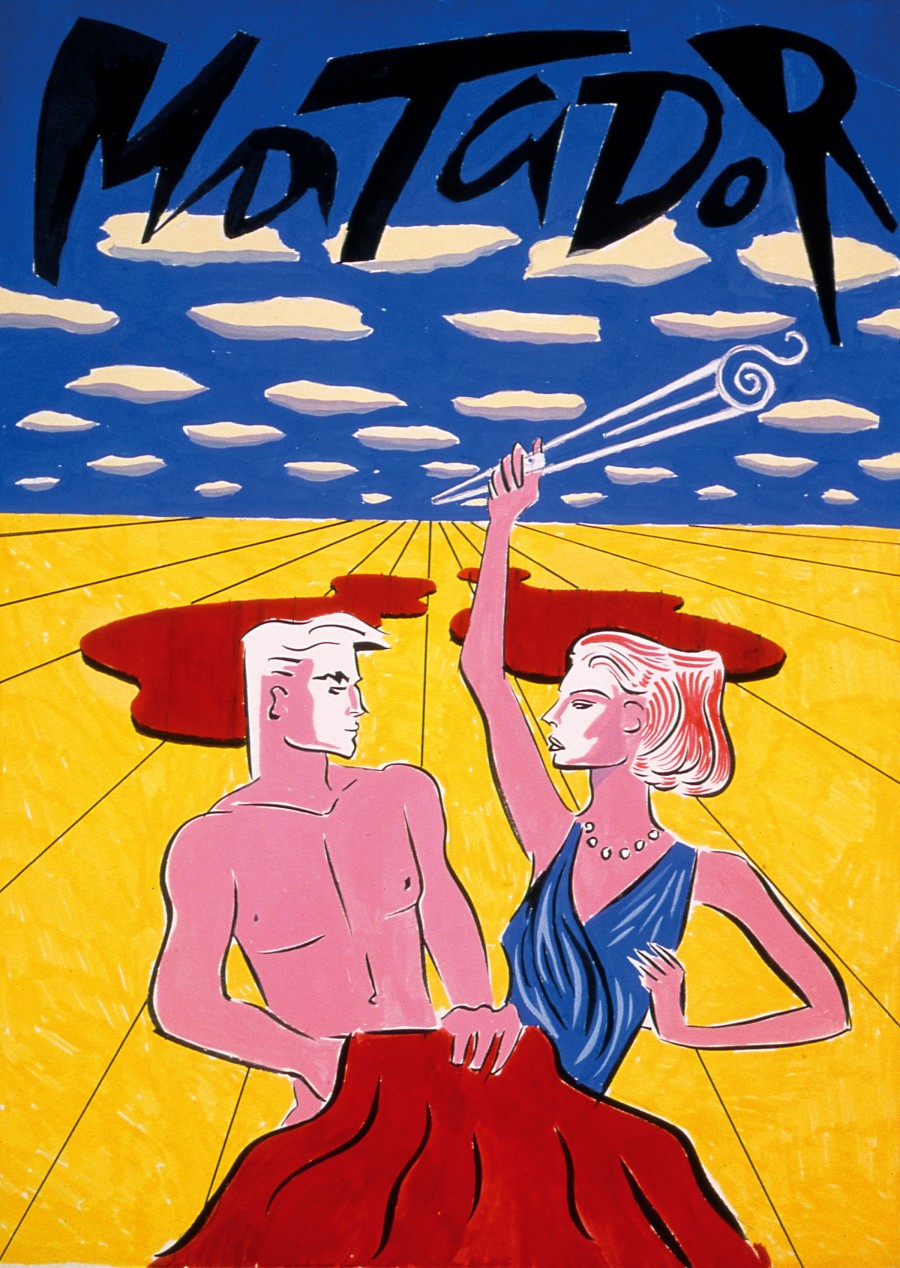 1986’s Matador marked the first occasion when the prolific writer-director embraced some kind of romantic sincerity, whisking up a dazzling, dramatic fugue which cross-processed the sacrificial violence of that Spanish perennial, bullfighting, with sadomasochistic sex. The poster, by Carlos Berlanga, combines French Vogue fashion sketch styling with the intense colour blotches of the De Stijl movement. 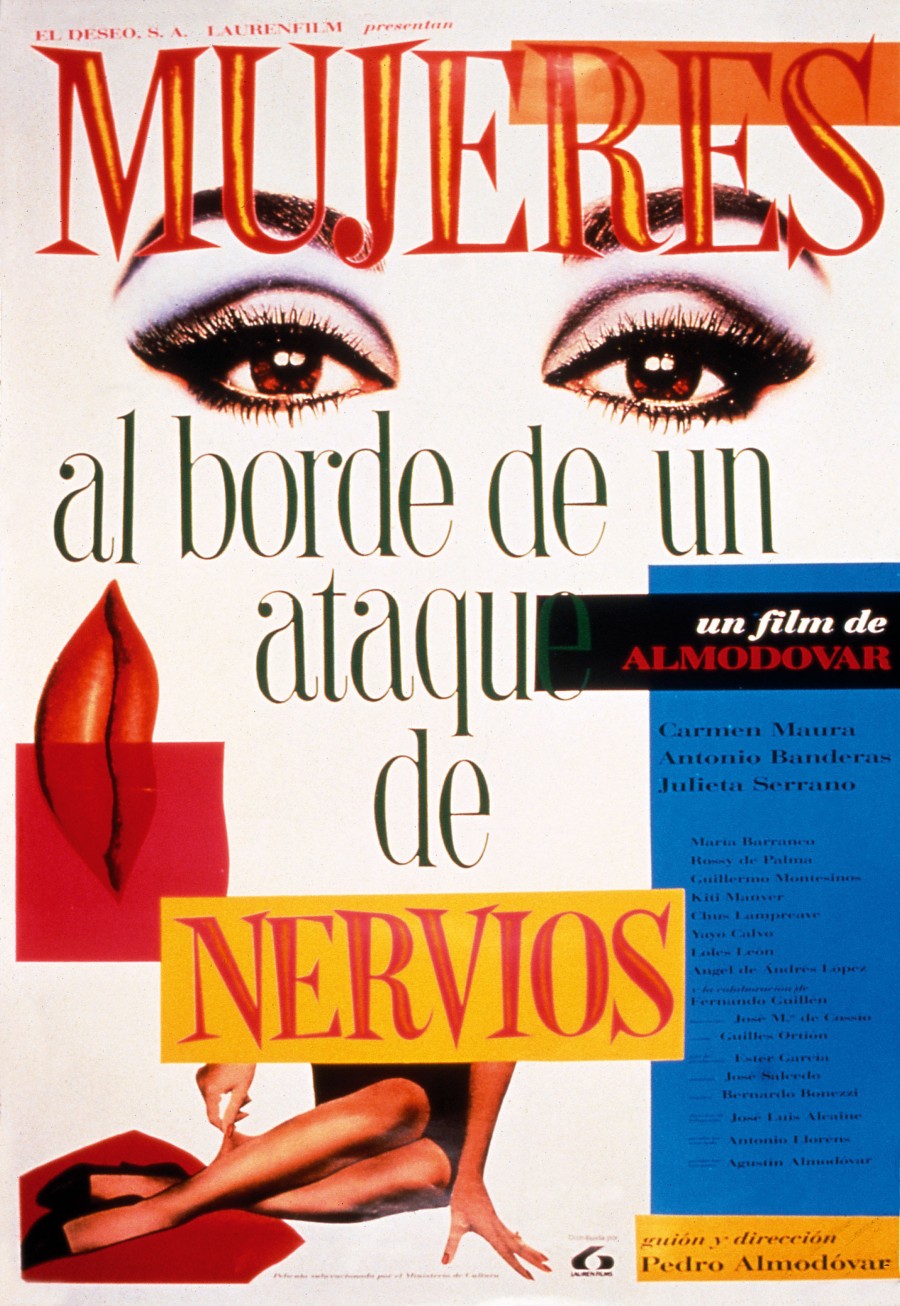 6. Women On the Verge of a Nervous Breakdown

Following nearly decade of setting himself up as an unrepentant scuzz artist, Almodóvar found that he could channel his niche interests into movies with mass potential, and 1988’s colourful, camp theatrical farce, Women on the Verge of a Nervous Breakdown, became his first major hit. With this new, more respectful and nuanced phase of his career came a new poster artist: Argentine Juan Gatti who had risen to prominence designing local rock album covers. 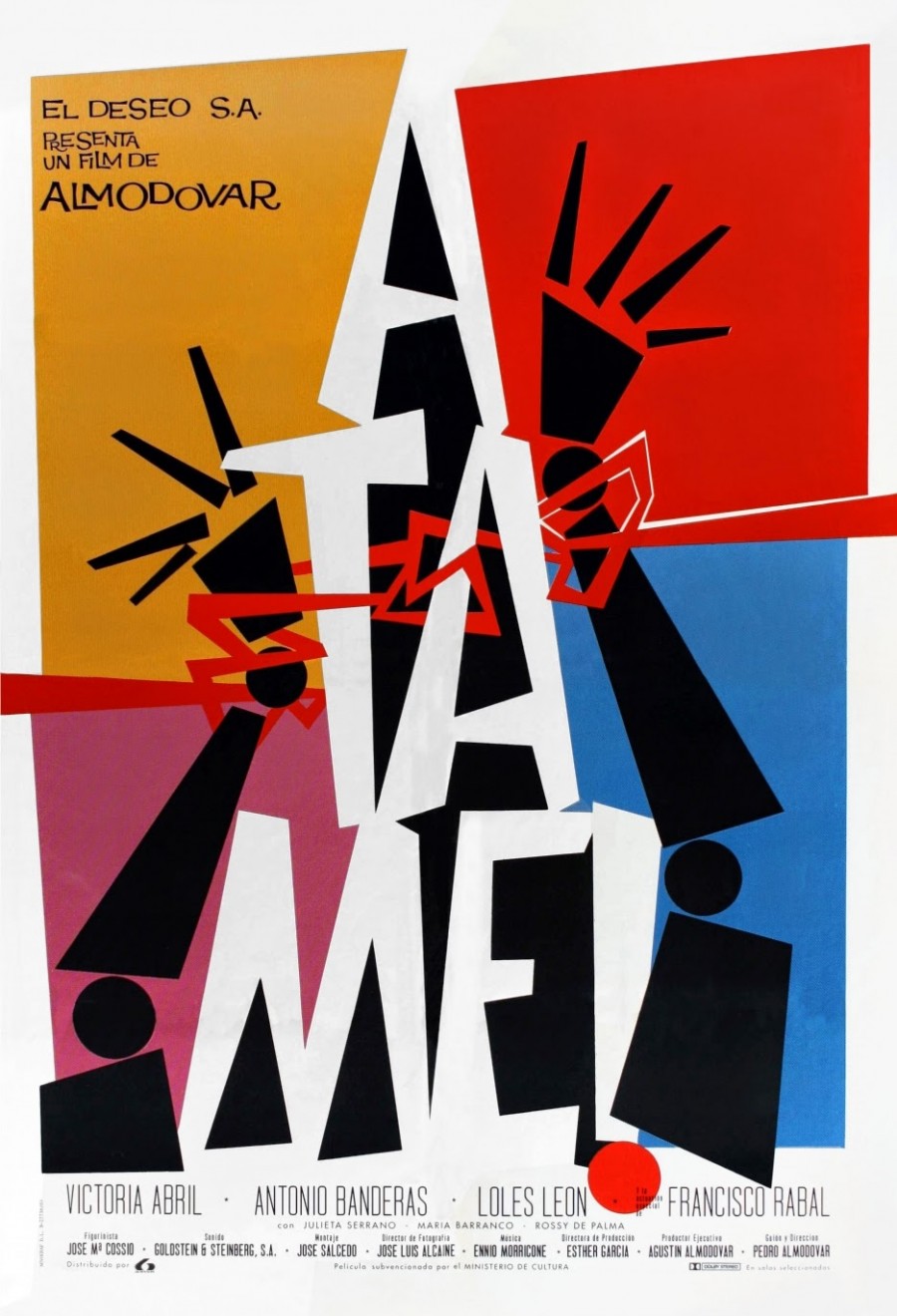 Now with the liberal coffee-table set under his thumb, Almodóvar returned with a kinky sex farce which, while maybe not as good as Women on the Verge…, did much to cement his brand as an arch provocateur. Yet, it perhaps did result in his most iconic poster design, a beautifully composed and dynamic lithograph by his old pal Juan Gatti. 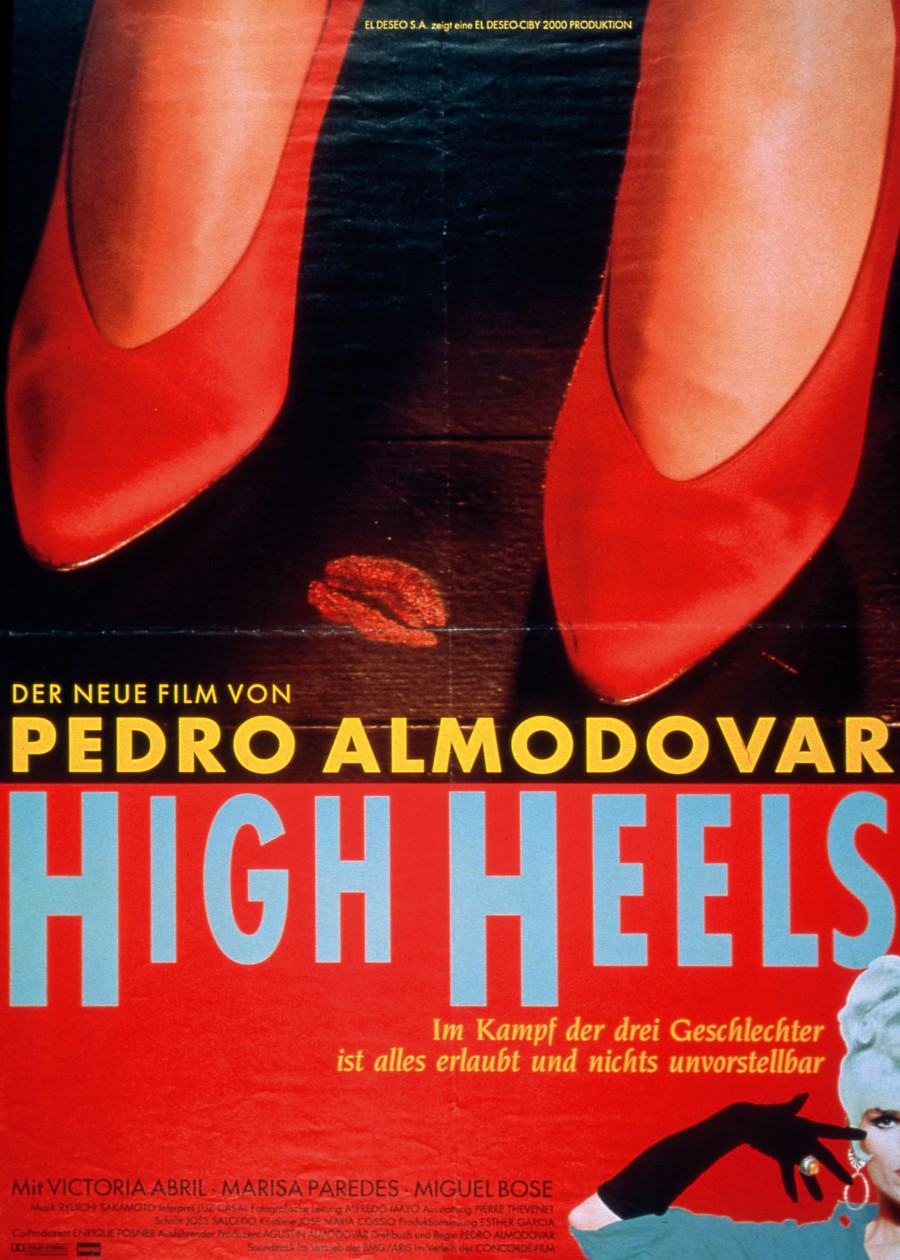 This is Juan Gatti’s German poster for 1991’s High Heels, a film which saw Almodóvar opt to switch up his female muses. The star here is Victoria Abril, playing a trash TV presenter who shacks up with her mother’s ex-husband. This is perhaps the first sign of the director’s interest in exploring tragic mother-daughter relationships on screen, and even though it brought together his usual mix of high camp capering and boisterous melodrama, it stands up now as one of his lesser-loved titles. 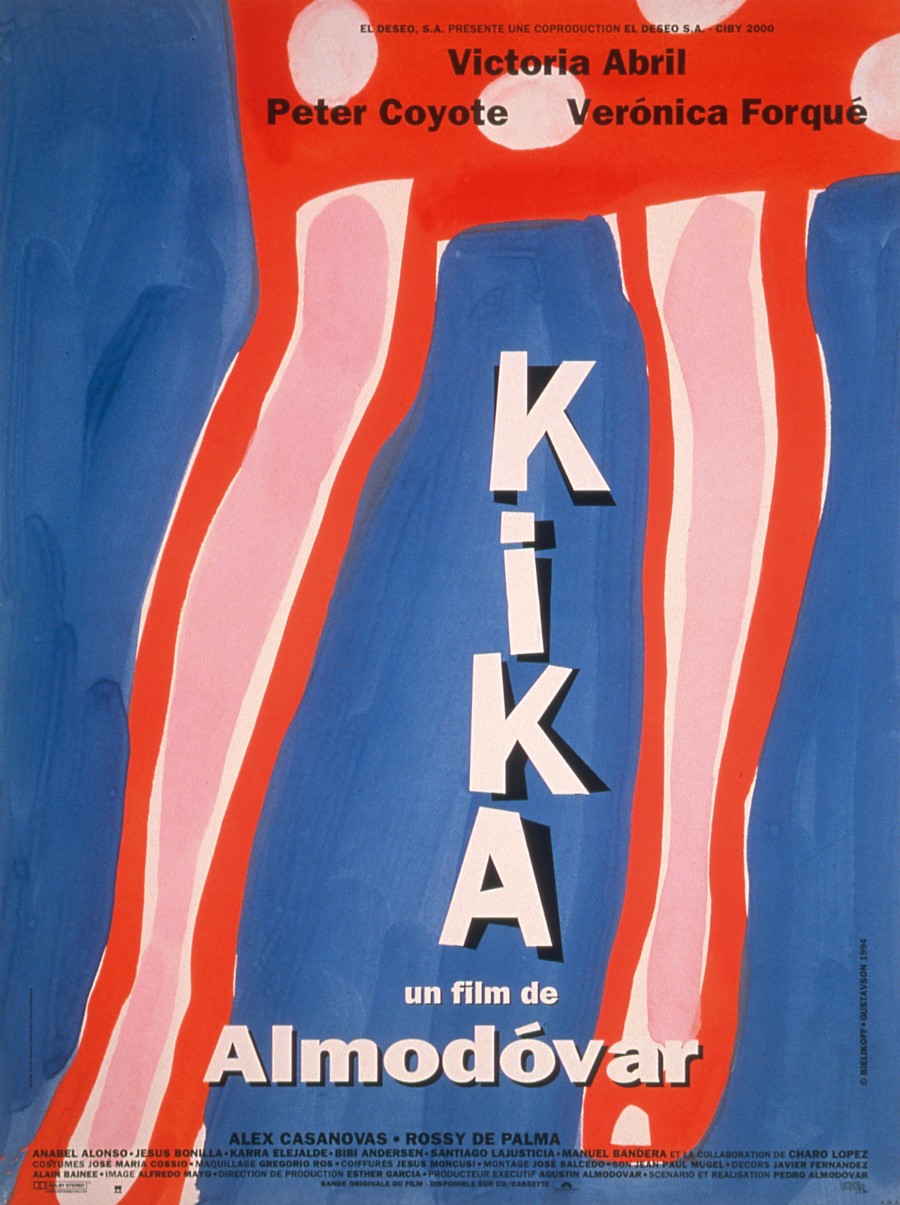 Kitsch overload occurred in 1993’s Kika, which delivers one of the director’s most complex and contrived plots all wrapped in an oversized pink bow. If there were an award for the Almodóvar film with the best costumes, then this one would have it wrapped up, though you don’t really get a feel for the film’s full extravagance from Juan Gatti’s more muted French poster design. 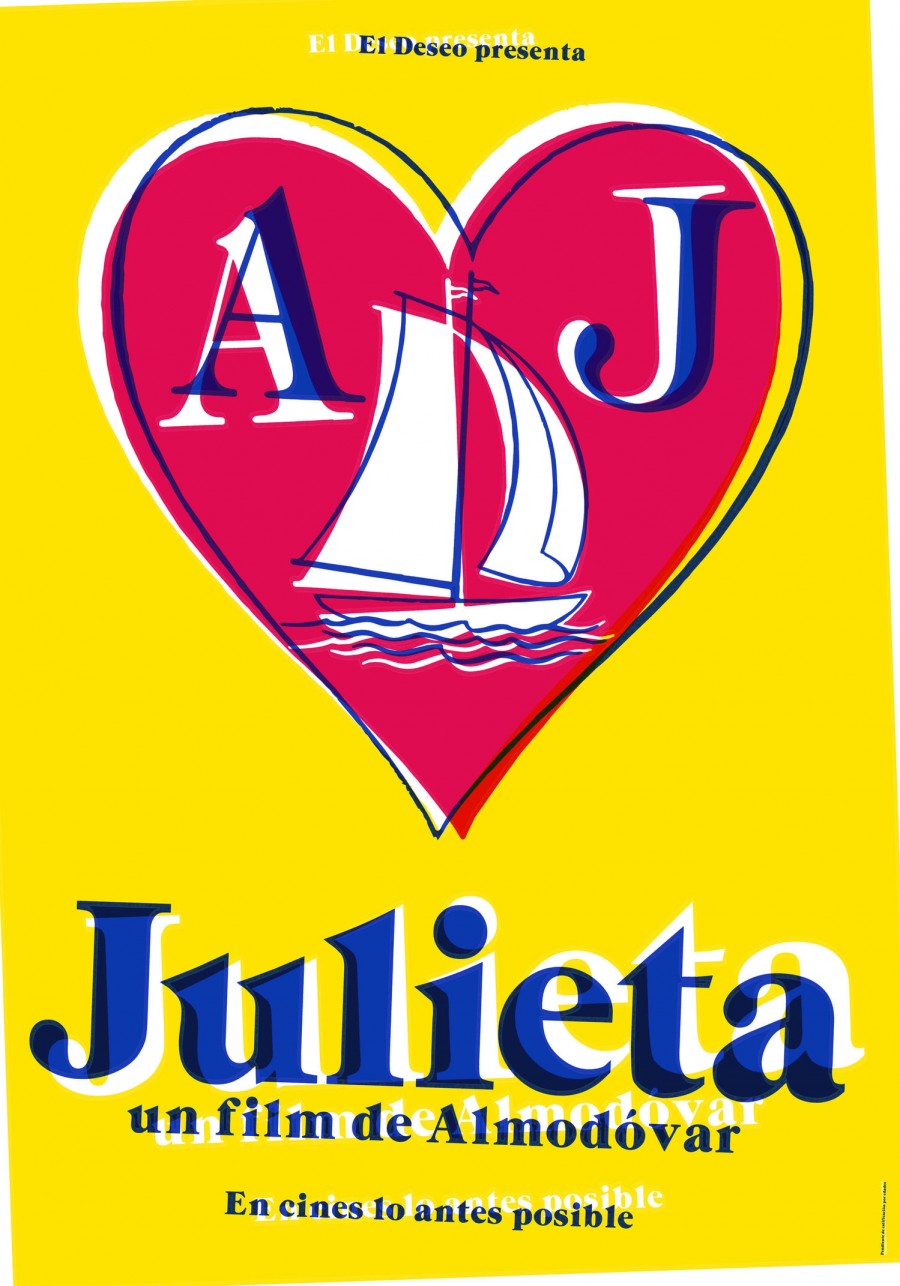 We’re hopscotching across the director classic period from All About My Mother to date so we can laud one of his greatest late poster designs, the one for his most recent film, Julieta. The tattoo-inspired motif marks an important part of the film itself, and this original Spanish design was by company call Bar Futura, based on an idea was from Almodóvar himself. 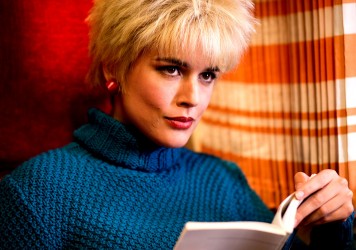 The latest from the Spanish master is a complex, brilliantly made tale of estrangement and grief.