On Location: The title sequence from Jacques Tati’s Mon Oncle

The Parisian town of Joinville provides the backdrop to the French director’s 1958 masterpiece. 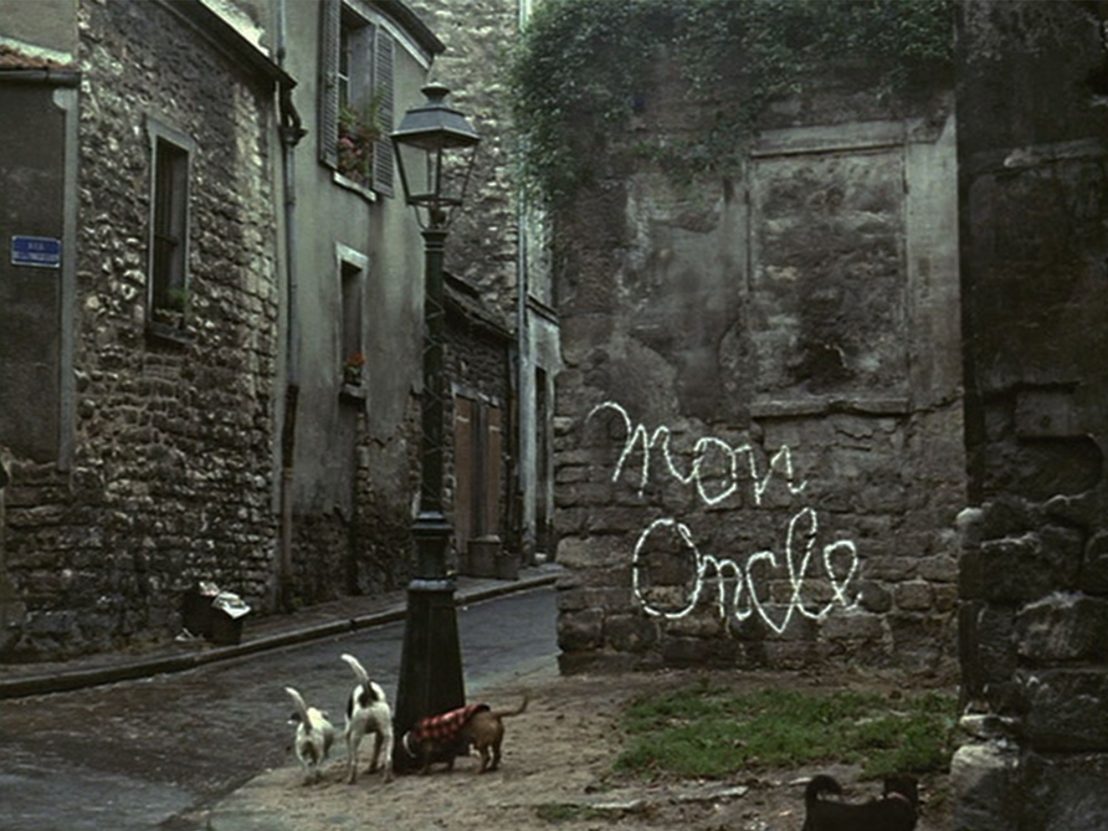 Jacques Tati understood space as much as comedy. Not content with perfecting poetic laughs and visual witticisms, the director arguably also defined the evolution of postwar architecture, examining its innovations and problems as much as any individual architect.

Tati was subtly critical of some of Modernism’s designs and buildings, finding humour in how people either accepted or struggled against the changes necessary in adapting to such calculated spaces. For Tati, these buildings sought to tidy up humanity, streamlining their lives and denying their wanderings.

The relationship between old and new worlds is perfectly contrasted in 1958’s Mon Oncle, which, unlike Tati’s other films, goes to great pains to accentuate this collision rather than simply focus on the modern. Mon Oncle is less about a linear narrative and more about a journey into the small everyday details of a constructed world. It follows Tati’s comic persona, Monsieur Hulot, as he navigates the changing town around him.

He lives in a chaotic brick building, rides his bike around the town and visits his nephew (Alain Bécourt) who lives in the automated world of the Arpel family; a world that is slowly spreading through the town. Hulot’s exploits largely come from trying to adjust to this world and often failing. He causes dismay at the factory owned by his brother-in-law (Jean-Pierre Zola), he accidentally partakes in the practical jokes of the local boys, and struggles with the changes as the cobbled roads are smothered with tarmac for cars. Most of all Hulot shows how this new age of architecture plays into the facade of keeping up appearances.

Even though the buildings of his films are mostly designed and built especially to highlight the fallacies in the architecture, some of his locations are of course real. In Mon Oncle, Tati relies on the illusions of buildings, whether it be the wonderful ramshackle house we see him walking through via windows on each level, or the strict lines of the Villa Arpel and its absurd water fountain shaped like a fish.

However, it was the real-life Parisian suburb of Joinville where Tati took inspiration for the old world feel of the streets of Mon Oncle and indeed they make up a large chunk of the location filming when the film isn’t shooting fake buildings. Monsieur Hulot’s house, for example, was still constructed and filmed in the suburb even if ultimately an illusion.

Joinville is notable for its cinematic history. It housed a successful film studio where a number of French and American films were produced from 1910 all of the way to 1987 when it eventually closed. Alongside this film heritage, Joinville eventually housed ‘Tativille’ in the director’s next film, Playtime, a huge metropolis of skyscrapers and blocks created solely by design which took longer to construct than the actual film itself.

The town is, however, most present in Mon Oncle and indeed opens the film; the rustic old French streets deliberately shown in stark contrast to the building sites of the new suburbs. As Tati famously once said, “Geometric lines do not produce likeable people.” It was the real Joinville where he found a warm, genuine humanity. 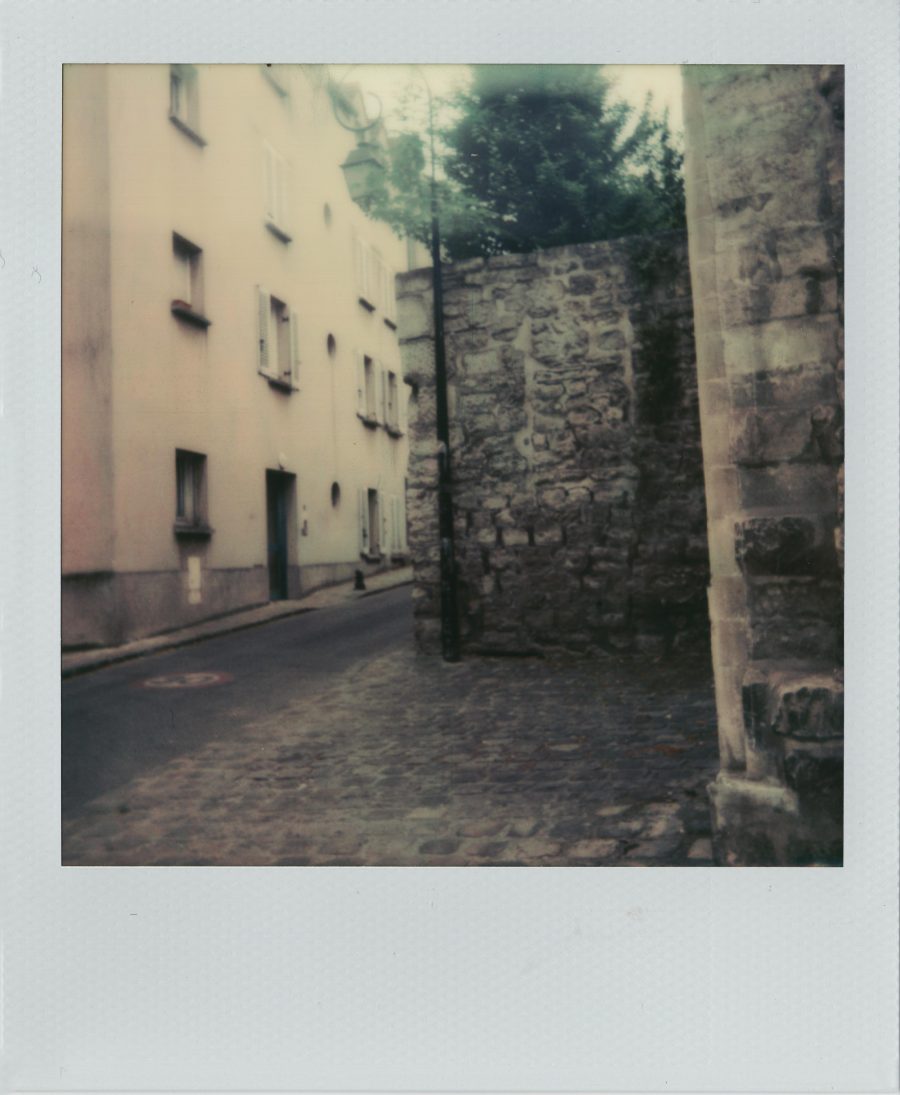 Though much of the film was shot at La Victorine studios in Nice, the film’s title – scrawled in chalk on an old brick wall – is was shot the Joinville area. After the credits have appeared on building site signs, we cut to a pack of dogs led by the sausage dog that lives in Villa Arpel. He runs throughout with the loose pack, from the older roads and scrublands to the straight streets of concrete walls, enjoying the derelict space in between and the area’s many archaic lampposts. Tellingly, the pack of dogs were largely unplanned and built into the film, Tati becoming so attached to them during recording that he later found them homes once the filming had concluded.

Travelling to the suburb on a lonely winter’s day, I went in search of this very particular wall. It stands at the intersection of a quiet street not far from Joinville-le-Pont station. Walking from there, the street stretches out, travelling alongside the water of the Marne. The new buildings along the high street almost knowingly mimic Playtime designs. The area cannot shake his vision and I later visited the road further along named after him Allée Jacques Tati, as well as the statue that now commemorates his film further up the street.

The old brick wall has survived, as has an old lamp post though since moved and of a design slightly younger than that seen in the film. The wall stands between Rue de Paris and Rue de la Procession, and it’s not difficult to imagine Monsieur Hulot suddenly zooming around the corner on his VéloSoleX. The building which once stood next to the wall has been demolished and replaced with a plain new build. Tativille and its straight lines was always going to win in the end though it’s pleasing to find a few of the old walls still standing in quiet rebellion just as Monsieur Hulot would have wanted. 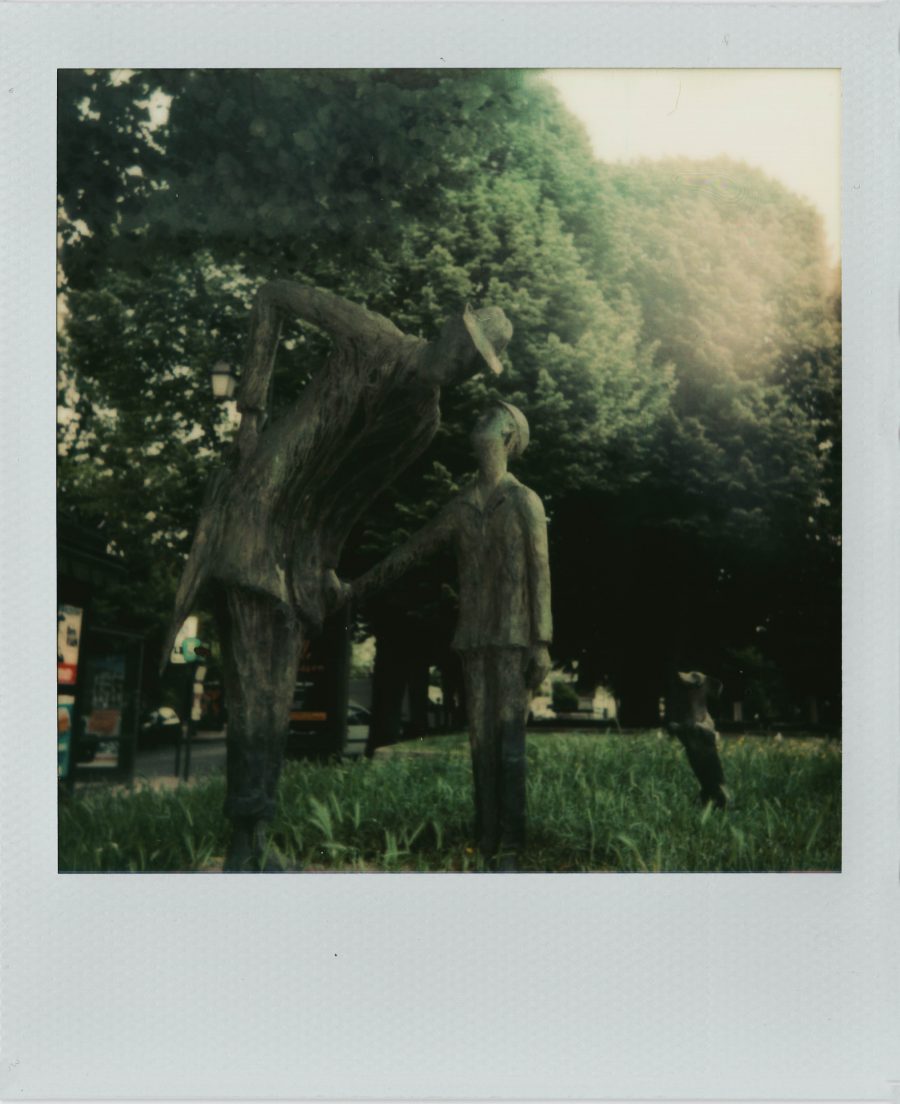 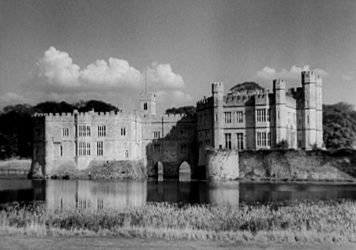 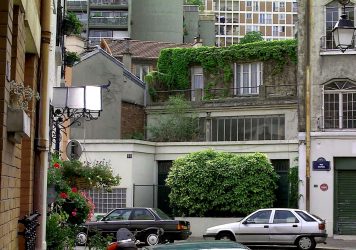