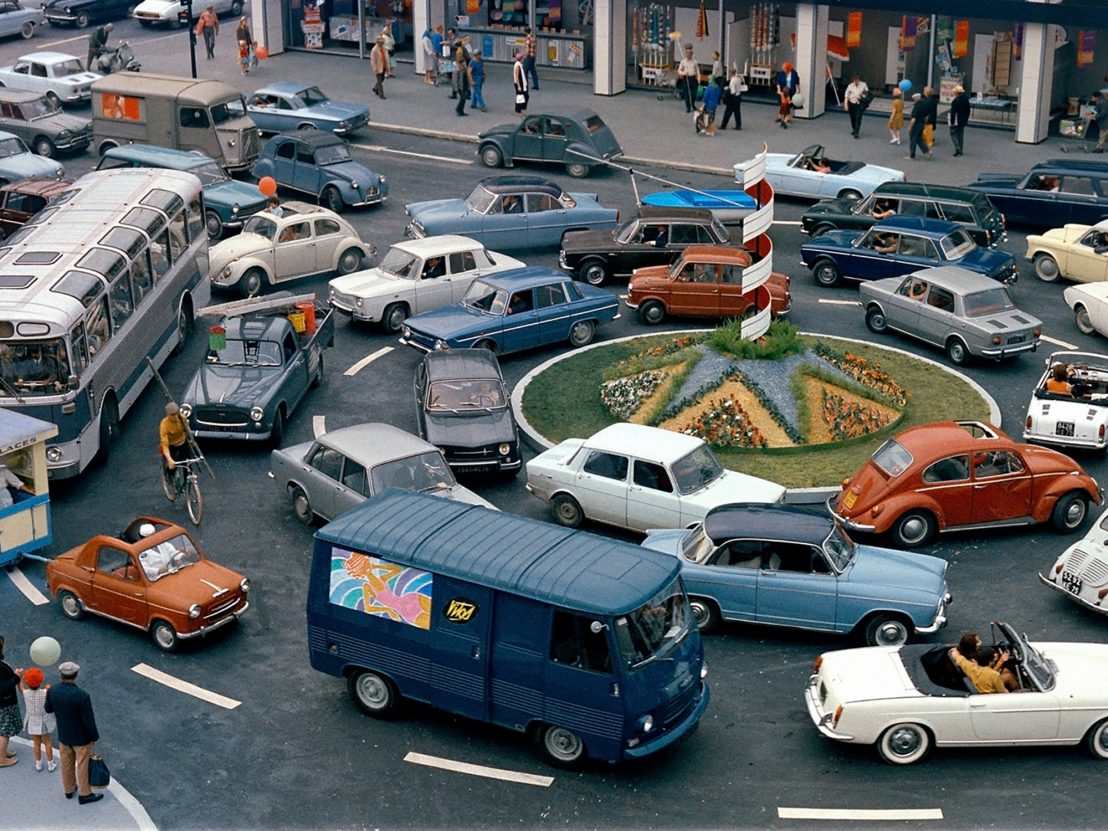 Monsieur Hulot (Jacques Tati) is waiting for a job interview in a glass office. It looks like he’s trapped in a fish tank. The camera is inside with him and the ambient sound is a soft computerised burr which randomly shifts in tone every few minutes. It’s like the sound of a distant washing machine jolting into spin dry and then suddenly slowing down again.

Occasionally, the camera moves outside of the office and on to the street, which can be seen through the layered, blue-tinted windows. The sound is no longer the mechanised burr that Hulot is hearing, but the sound of cars, people and the rustling of the wind. We are hearing what the camera is hearing, not what Hulot is hearing. In the 1967 film Playtime, the cameras can see and hear. They may not be human, but they are sentient.

It’s rare when we watch a movie to be offered a chance to consider the space behind the camera. This negative space – to which it is sometimes referred – can be a vital asset which enhances and enriches the world we see on screen. It’s easy to take the status of the camera for granted. The camera is the camera – it films the people, it relays the story. But have you ever wondered why the camera is watching a person? Does a camera even have the ability to “watch” considering it’s a dumb machine? Or is it actually the director with his eye to the viewfinder?

People regularly cite the pleasures of “escape” to justify a trip to the cinema. But this escape is often from having to think about the nature of what is being watched – an illusion, an artificial construct. For most mainstream pictures, film grammar is, by and large, self-consciously invisible, or at least a secondary consideration behind plot, characters, jokes, romance, etc. It suggests that filmmakers, as a reflex, don’t want you to expend brain power on such meta-textual trifles as editing or camera position or the motivations behind angles and compositions. In Playtime, every shot is a game. Every creative decision has been executed which such immaculate precision and is so rich with detail that it can send the mind into paroxysms of pleasure.

The film is about a man arriving in Paris at the same time as a group of female American tourists. The man bumps into the tourists a few times, wanders around and meets some people, and then visits a newly opened restaurant. When the sun rises the next day, he buys one of the tourists a scarf as a romantic gesture. For my money it is the greatest film ever made.

Yet, this is a banal and meaningless proclamation – one without even the slightest hint of gravitas. Yet my unwavering love of this movie stems from the idea that it remains a mystery to me, and probably always will do. Not a complete mystery, but there’s something ineluctably alien about it. If feels like the monolith out of 2001: A Space Odyssey. I have no idea where it came from but am glad that some higher state of being exists in the universe to place it out there, on the landscape.

Tati’s bounding hayseed M Hulot is, in this film, alienated from his immediate surroundings – a looming, glass and steel rendition of Paris which has put paid to the for-granted right to personal privacy. The viewer too is placed at a remove from the film. Yet the film never evokes a sense of disaffection: Hulot never looks up at one of these landscape-blighting monstrosities, shakes his fists to the sky and curses its eyes. There’s the lovely sentiment that we can’t, don’t and won’t judge or audit our immediate surroundings, just as we wouldn’t specifically look at the editing (or maybe let’s call it the architecture?) of a movie.

One of my other all-time favourite movies is from the same year, the same country and even tells a similar story: Jacques Demy’s Les Demoiselles de Rochefort. Both films posit the moviegoing experience as a whirlwind layover in another town. There’s no palpable transcendence on offer, no single-aim task to complete or lone character to follow. It’s a mesh of missed connections and life-altering coincidences. They are movies about the idea that something not happening or something falling through is dramatically valuable. Call it the negative space of experience.

Playtime offers an over-sized maze of critical possibilities and entry points for discussion. As an aside, I’ve always thought one of the film’s most purest examples of (probably accidental) poetry is that the character of Barbara (German actress Barbara Dennek) never acted in a film before and, per current biographical resources, never appeared to act in anything since. The film is a love story at heart, and just as Dennek entered into then swiftly departed from our collective sight-lines, so too did the fictional Barbara depart from Hulot’s life.

The tragedy of the film is that the mechanics of their meeting is so contrived, that the likelihood of them ever meeting again in the future is negligible. Beyond its monolithic stature, Playtime is often compared to Stanley Kubrick’s 2001: A Space Odyssey, because both films are about unlikely things coming to be. They are films which depict a fragile set of circumstances that in turn cause a dazzling chain reaction. Hulot and Barbara are the profound connection. They represent the infinite. They are the Big Bang.

Playtime screens as part of Light Show #1 – a season of films on 35mm curated by MUBI, the ICA and Little White Lies – on Friday 8 December at 8.30pm. Book tickets here.