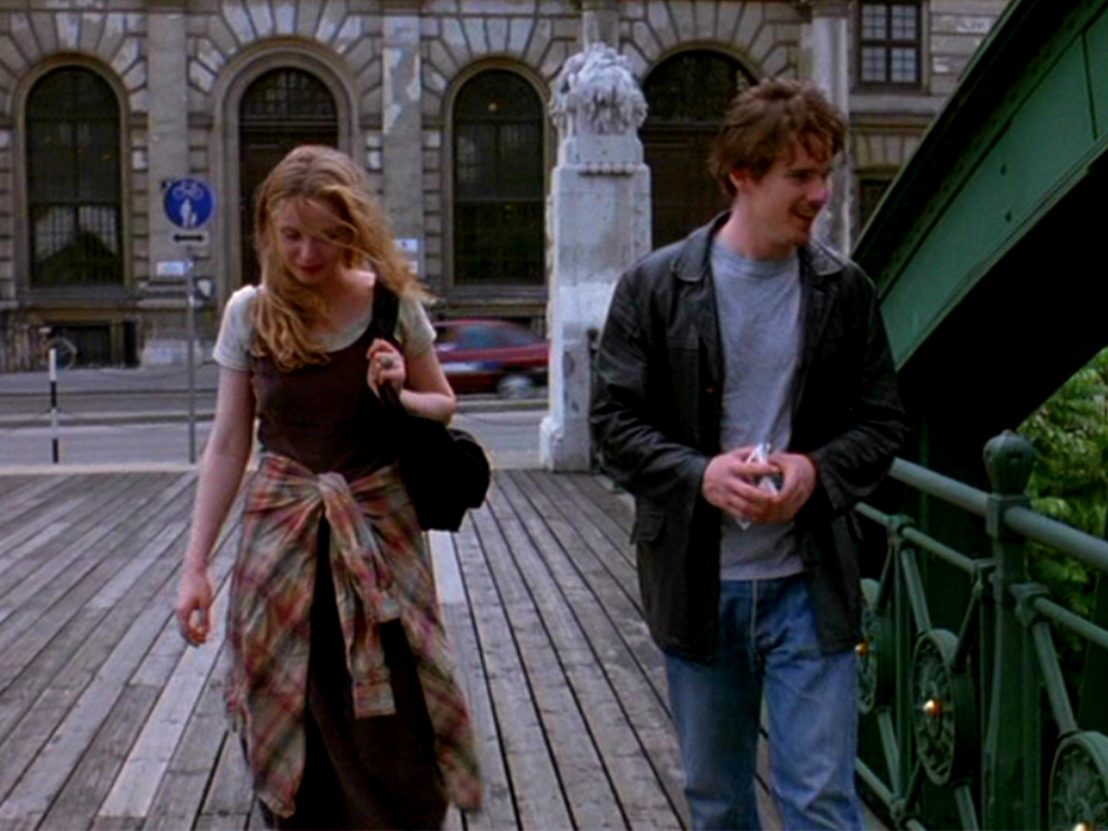 Richard Linklater’s ‘Before’ trilogy is as much about places as it is about the people who explore them. All three of the films act as a mapping of their respective settings – Vienna, Paris and the Peloponnese peninsula – as much as unfolding dramas following two central characters.

In spite of these films seeming to be built on improvisation and chance, the dramas are meticulous in their execution, in particular paying attention to unique coincidences and symbolism between the discussions and the wanderings. The first film in the trilogy, Before Sunrise, is the most overt in this sense, using the city of Vienna as a springboard to showcase the early blossoming of the relationship at the heart of the films.

The film begins the story of Jesse (Ethan Hawke) and Céline (Julie Delpy), whose chance conversation on a train from Budapest to Vienna sparks an on-off relationship that unfurls over several decades and two subsequent films, Before Sunset and Before Midnight. Convincing Céline to get off the train with him and spend a night ambling around the Austrian capital, the couple explore randomly and become more attached as the streets pass by under their feet.

In the evening, we follow the characters in the physical sense through a variety of Viennese locations, and in the conversational sense as we learn about their lives and their desires. Jesse is escaping the memories of a crumbled relationship with a woman now living in Spain, while Céline is equally several months gone from a breakup with a temperamental Parisian artist.

Taking his cues from Éric Rohmer’s meandering, conversational films, Linklater explores the city of Vienna in an incredibly naturalistic way. Unlike the other two films in the trilogy, there’s an overt sense of chance hanging over the whole film: the chance that their city sojourn coincides with ‘Bloomsday’, the day of James Joyce’s ‘Ulysses’; the chance encounters with strangers that tell unusually of the couple’s future in hindsight; and the chance of happening upon other film locations, notably from Carol Reed’s The Third Man including that film’s Ferris wheel and the door where Harry Lime (Orson Welles) first appears.

A plain but surprisingly pivotal location in Before Sunrise arrives early on in the form of a footbridge, not long after Céline and Jesse decide to spend the day together. The bridge feels heavily weighed by the chances taken on the film’s journey. The train that Céline could have stayed on is implied (through editing rather than reality), to pass under it as if the viewer sees the chance life she narrowly missed moving off and away from the present. It’s a telling location as the bridge is really two combined; one for pedestrians – the more interesting journey like that of the film – and one for trains – the simple way from A to B.

The pair even comment on the bridge’s wooden structure as they walk over it: “This is a nice bridge.” It’s a distraction from the unusualness of their situation, unsure as to what might happen in the 24 hours they have in the city and why they both felt this was the right choice. 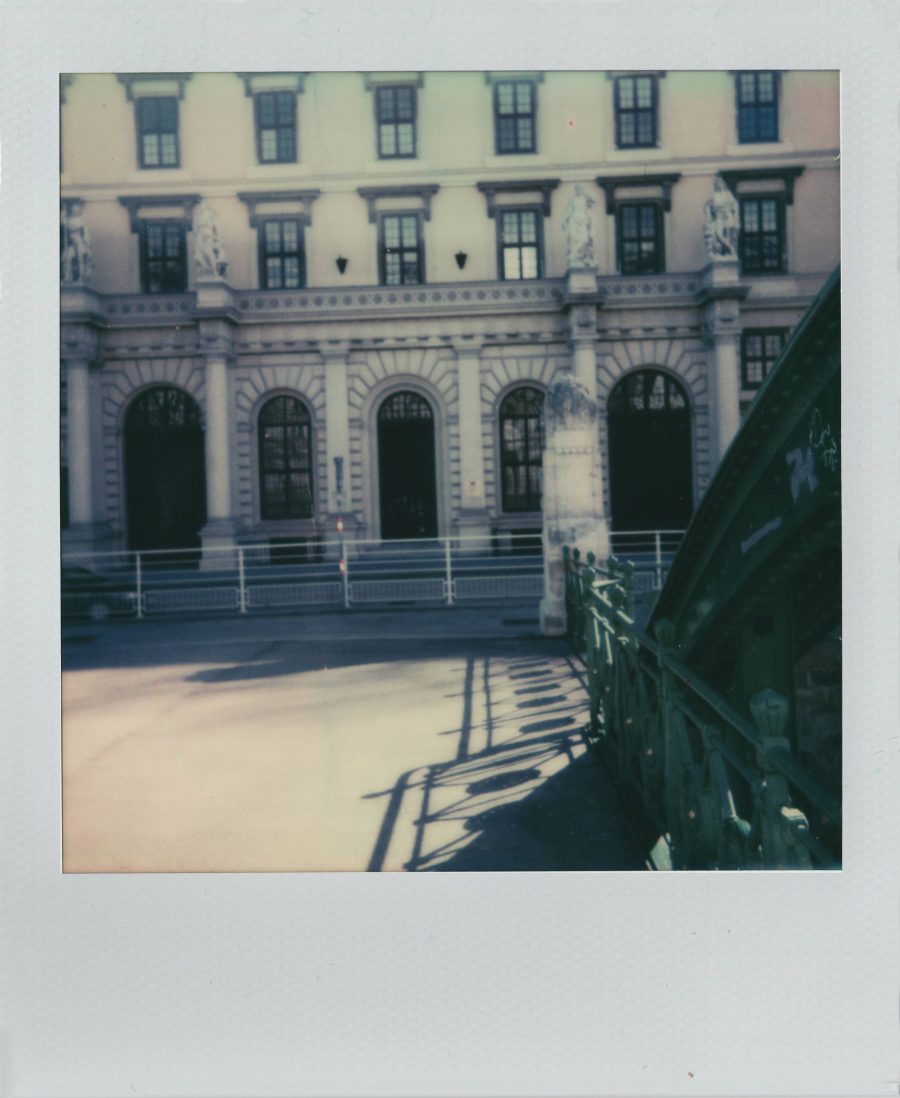 The bridge in question is the Zollamtssteg, connecting Reischachstraße and Vordere Zollamtsstraße over the water of the Wienflusse. The railway bridge was designed by the noted architect Otto Wagner and the footbridge by Martin Paul. The design seems pivotal for the symbolic use in the film as the characters can earnestly watch the train underneath, witnessing a potential, less exciting future vanish before their eyes into a tunnel and beyond.

It’s a visual image that’s used to open the shot, as if we’re then following a new journey, a much slower but more meaningful meander on foot with two people rather than the lonely travellers separating. They get talking to their first Austrians on this bridge, two amateur actors performing in a play near the Prater. The whole scenario feels as if it’s the beginning of something; seeing a new city and the casting off of old lives.

The real-life location retains the same refreshingly feeling. The bridge on my visit gleamed equally in that same soft sunlight from Linklater’s film, walking a few minutes through the beautiful gardens of the Stadtpark in search of it. There was only a street sweeper brushing leaves off the wooden boards on the visit rather than actors selling their show but, like so much of the city centre, the buildings all around are entirely preserved and intact.

Unlike the Céline and Jesse, I took an actual photograph; a Polaroid rather than a mental picture to remember the day. Equally in keeping with the film, it felt right to wait for one of the trains to come by. I hadn’t ventured on some new, exciting romance but feeling the potential of another, less exciting life travelling on under the bridge felt unusually cathartic. Like Jesse and Céline, I was glad to be stood on top, watching it pass by and away.