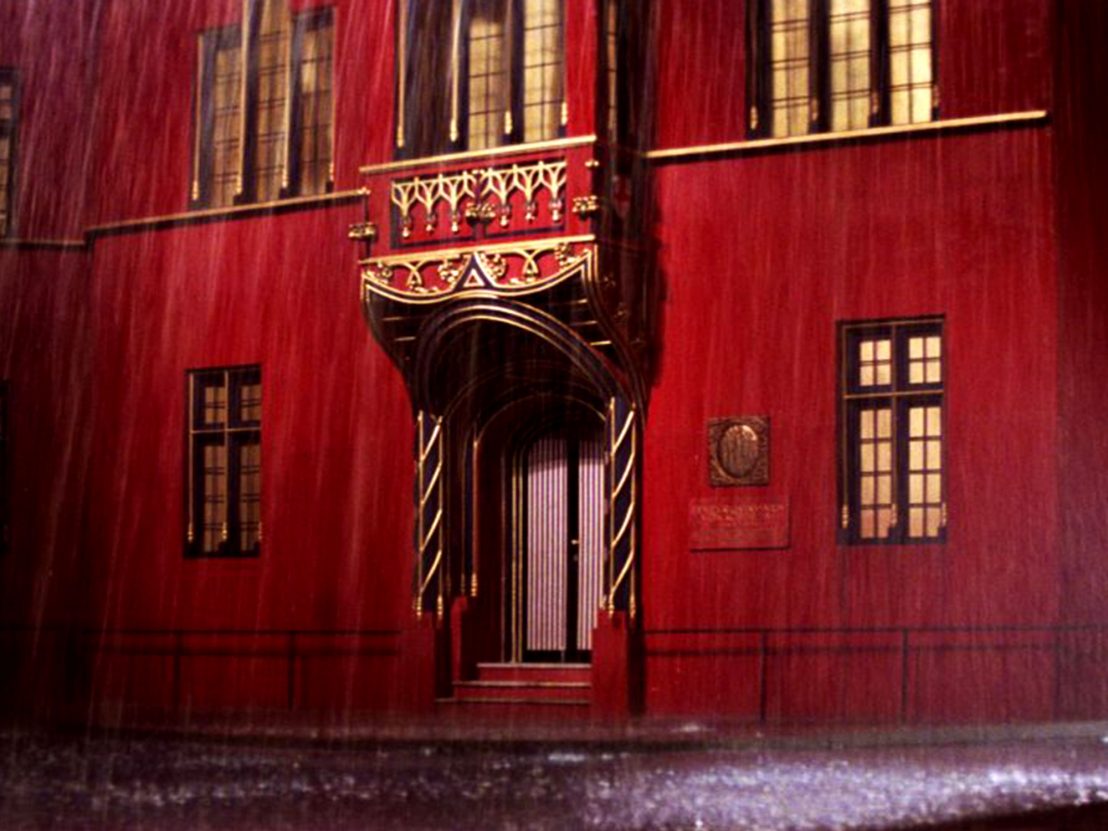 It is perhaps surprising to find that one of the most intimidating buildings in 1970s horror cinema is a German dance school. The building in question is a set built for Dario Argento’s chilling yet vibrant 1977 film, Suspiria, and is easily one of the director’s most alluring and hypnotic of cinematic spaces.

With its lavish golden columns and bright pink walls, it’s even more astonishing how such dazzling, even camp, architecture becomes so ominous a presence. The visit to the fictional building of the film is obviously impossible. Yet Argento took inspiration from a genuine historic building in the real town of Freiburg where the film is set, and so the academy in question has, in some sense, a ghostly real-life twin.

Suspiria follows American ballet dancer-in-training, Suzy Bannion (Jessica Harper), who is sent by her parents to a private dance school, the Tanz Dance Academy in Germany. From the moment she arrives at Munich Airport, strange events begin to occur. Maggots drop from the ceilings, students are found violently murdered, and the director of the academy goes mysteriously unseen. On talking to the other girls, it is clear to Suzy that something is awry at the school and she follows her curiosity in search of the links between the academy and the local folk legend that suggests it was founded by a malevolent Greek witch, Helena Markos.

With Argento being one of horror’s great stylists, it’s unsurprising to find his use of locations equally as grand. For much of the film, the real locations are used to give grounding for the main school, as if its malignant presence blackens and infects everywhere around it. Be it Munich Airport where we first meet Suzy, or the foreboding Königsplatz where we see the blind pianist Daniel (Flavio Bucci) meet an untimely end, everywhere is tainted by the presence of this academy. The sense of dread is there in the locations from the off but is really part of an effective conjuring trick; creating a world around the school using real locations to hide the fact that the school itself is in fact a set.

Argento achieves a sense of strange authenticity in creating his lavish dance academy thanks to the genuine building he borrowed from. Though not housed in the middle of a bleak forest as suggested in the various journeys of the film, Argento and his production designer, Giuseppe Bassan, were inspired by one of Freiburg’s most famous buildings: the Haus Zum Walfish or Whale House. 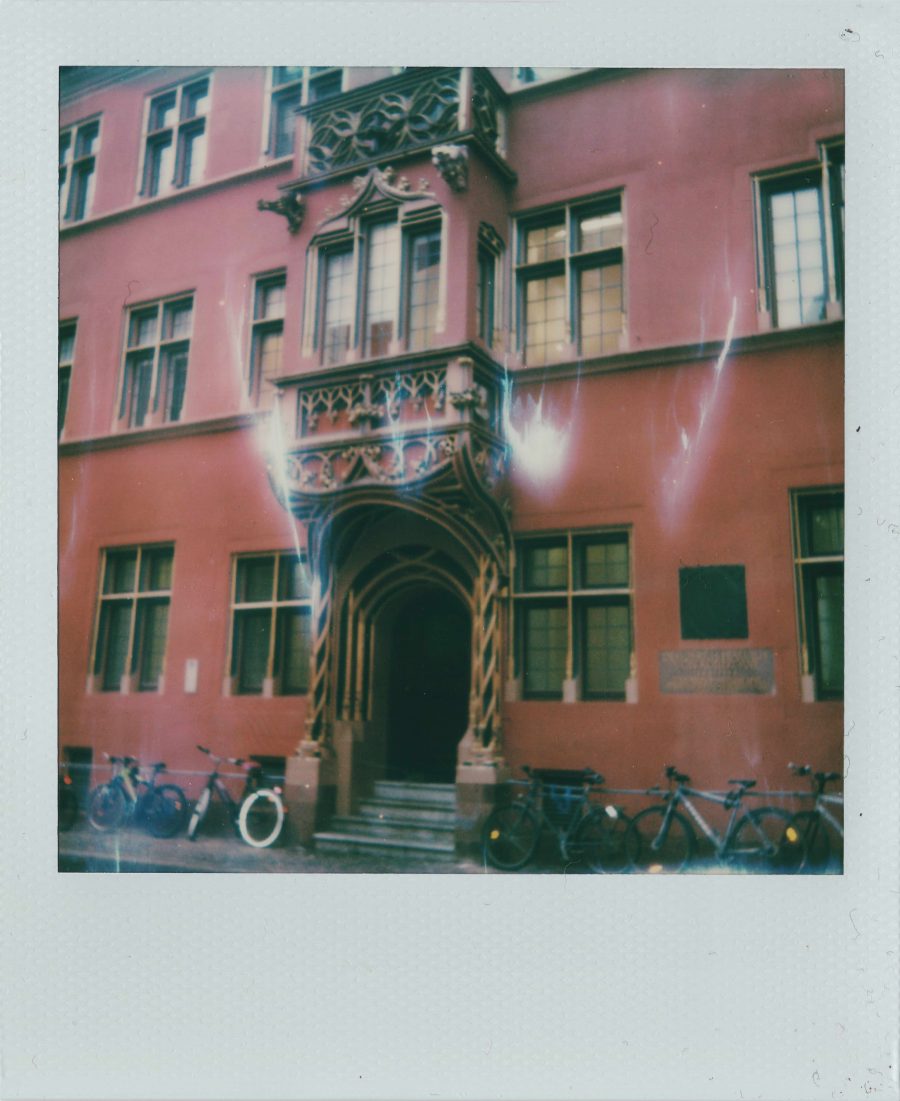 Sat in the centre of the university town, the house in its earliest form was built in the first quarter of the 1500s, and the restored building is in parts even more lavish and stylised than Argento’s recreation of it. Though now housing part of a museum and a bank, the building is most famous for being the brief residence of noted classical and theological scholar, Desiderius Erasmus. The plaque seen on the outside of the real building celebrating this link is mischievously recreated by Argento for his set, knowing the irony of having an occult conspiracy housed in the refuge of one of Christianity’s most noted humanists.

On my visit, it was difficult to walk around Freiburg without the famous soundtrack by Goblin playing over and over again in my mind. Though far from the atmosphere of the film, with the surrounding Black Forest being more picturesque than unnerving, it was impossible to shake the music and its eerie melodies. Wandering through the Old Town quarter and its narrow cobbled streets, the set of buildings of which the Whale House is part of came into view.

The main entrance recreated by Argento is tucked away in Franziskanerstraße and was suitably quiet. The bikes of students ran along the front whilst someone from the bank sat with a sandwich by the steps. Seeing the building in real life shows how brilliant Argento’s facsimile really is though it was telling from wandering around the back and seeing an even more extravagant entrance that the director took what he needed from the building and nothing more.

If not for the misplacing of the Erasmus plaque in putting it too close to the doorway, Suspiria could almost get away with claiming to have really filmed the Whale House. With the visit over, I sat in a café just around the corner, comparing the Polaroid to pictures I had of the film set, still quietly debating whether something else had been captured in recreating the building. Argento’s whole cinematic project plays with the balance between garish, kitsch style and an unsettling sense of the real behind the pulp.

In his earlier giallo films, this is a clearer relationship as he was always using real locations and largely earthly narratives of murder. But there’s something strange about the inspiration in choosing this building and design, something that makes Suspiria far more effective; as if he unconsciously tapped into the potential of the genuinely otherworldly – perhaps even the occult – and unknowingly recreated and preserved it for future purposes unknown.

With thanks to Alexandra Heller-Nicholas. 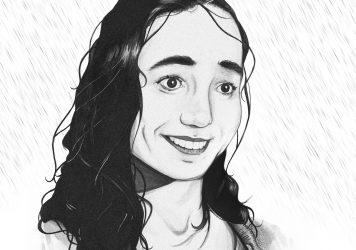