Yet another Hollywood remake is upon us – this time in the form of The Mummy, a rebrand of its 1999 namesake which seems to have no affiliation to the previous franchise. Unsurprisingly we see blockbuster aficionado Tom Cruise at the helm, replacing the more low-key Brendan Fraser. The trailer opens with an explosive plane crash spliced with confused looks and a customary ‘What the hell?’ from Cruise. In true Tom Cruise style, he is thrown about the plane, presumably performing his own stunts which he will tell everyone about on numerous chat shows, before making a grand escape.

He then awakes from an apocalyptic coma to find himself in a ‘new world of gods and monsters’ which has been overtaken by Ahmanet (Sofia Boutella) – a female monster as opposed to the previous trilogy’s male demi-god Imhotep. Another blockbuster trope imposes itself on the trailer whereby London is seemingly destroyed, with Big Ben being smashed by Ahmanet resembling that of London has Fallen. The director Alex Kurtzman ensures his previous experience writing Transformers pays off by ending the trailer with some essential mechanical reverb, revealing how this reboot is a modernised version of the funtime original. It seems to be less based on Ancient Egyptian lore and Indiana Jones style puzzles, and more geared towards an action packed cash cow. Yay. 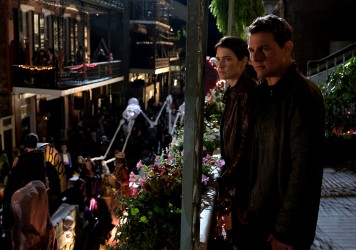