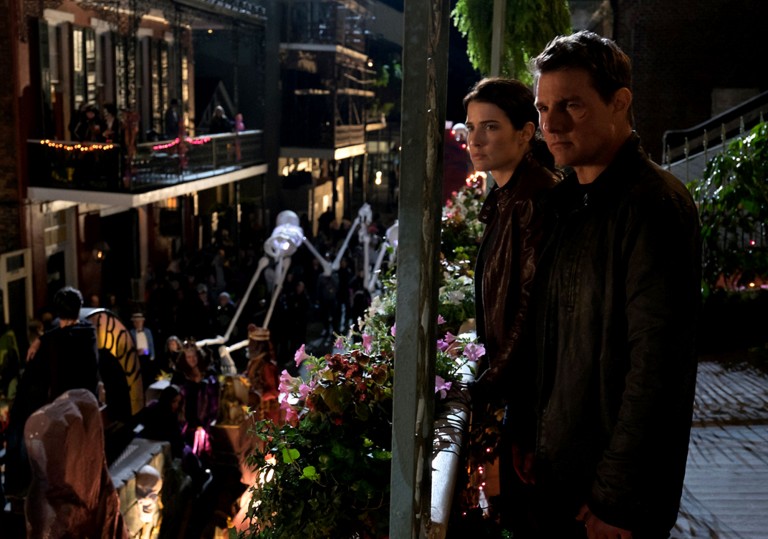 Struggling to remember anything about the first Jack Reacher.

Solid and uninspired. You may just want to heed the advice of that title.

Tom Cruise used to be better than this. Now, we’re not so sure.

Whether he’s evading an entourage of ineffective hitmen, being flirty-professional with an attractive female co-conspirator, or simply trying to connect with his is she/isn’t she daughter, Jack Reacher can’t catch a break. In this enjoyably naff and wholly inconsequential sequel to Christopher McQuarrie’s 2012 actioner, our hero is once again depicted as a good guy with a difficult past, a self-styled ex-general turned drifter who relies on his easy charm and keen instinct to squirm his way out of trouble. And that’s it. No backstory, no discernible character arc, no reason to keep watching.

Of course, as with Ethan Hunt, Reacher’s appeal lies in his enigma, but continuously playing to Cruise’s strengths is to ignore those of Lee Child’s literary creation. What this film plainly lacks is nuance. In one scene Reacher and Cobie Smulder’s scorned Major track a junkie war veteran to a crack den in New Orleans, where an opportunity to do something more with the titular protagonist is missed. Given his murky military background, one available reading of Reacher’s constant snooping and increasingly paranoid, violent behaviour is that he is suffering from PTSD.

In an alternate fan theory version of Jack Reacher: Never Go Back, the layers of Reacher’s complex nature might be peeled back to reveal a socially maladjusted fugitive in desperate need of help. Not here though – director Edward Zwick, abetted by co-writers Richard Wenk and Marshall Herskovitz and, yes, even Cruise, makes no attempt to explore the character’s psychological make-up or provide deeper meaning. Indeed, the only real insight we get into his psyche arrives late on via an oddly homoerotic undertow, when Patrick Heusinger’s chiselled alpha-assassin decides to make things uncomfortably personal.

On a more positive note, there’s plenty to like about Danika Yarosh’s feisty performance as Samantha Dayton, despite the fact that she’s sorely wasted in a tedious daddy-daughter subplot that’s clumsily shoehorned in before eventually being resolved in the most anticlimactic manner imaginable. She even gets to deliver the film’s best line, at one point repeating an unfavourable description of Reacher as “a big hero and a total asshole.” Apt, but still a fairly weak substitute for actual characterisation.

After two Jack Reachers and at least two too many Mission: Impossibles, there’s a special kind of viewer fatigue that comes from watching Cruise leg it around after some vaguely corrupt organisation (in this case a munitions supplier named Parasource) for two hours. As an action star, there’s no denying that he still has what it takes – it’s the routine itself that is suddenly starting to look leaden-footed.

Struggling to remember anything about the first Jack Reacher.

Solid and uninspired. You may just want to heed the advice of that title.

Tom Cruise used to be better than this. Now, we’re not so sure.